Bangladesh with a population of approximately 170 million and at around 1,200 people per square kilometre is the most densely populated country in the world. The report titled Making Vision 2041 a Reality: Perspective Plan of Bangladesh 2021-2041 (Vision 2041) published by the General Economic Division of Bangladesh Planning Commission, Ministry of Planning, suggests that ‘owing to the deltaic formation of the country, the configuration of rivers and climate change, Bangladesh has been ranked as the fifth most vulnerable country among 171 countries in terms of risks from natural hazards.’ Environmental history of the country suggests that tidal surge, salinity, flooding, river erosion and cyclones are regular features of Bangladesh. Climate change is a real threat to her national level prosperity. So, any development plan needs an integration of the environment and climate change considerations within it. The Planning Commission also expressed its desire that it will adopt a green growth strategy. However, in order to achieve the goal presented in the Vision 2041 report, a building block of a plan needs to be considered. That building block of plan can bring together into a coherent whole the various elements that have been set out in the report. This essay aims to examine how to integrate environment and climate change issues in development in a sustainable way.

The basic arithmetic for climate change is straightforward. Climate change is directly related to cumulative emissions of carbon dioxide. This relationship means that to stop warming, carbon dioxide emissions must also stop. The global warming has already crossed one degree Celsius from the pre-industrial level. In order to stabilising it at two degrees implies carbon dioxide emission has to be reduced by 10 percent for every tenth of a degree of warming. To stabilise at 1.5 degrees, emission would need to reduce by 20 percent for every tenth of a degree of warming. Practically it is a daunting task to reduce consumption and see GDP growth. But the debate is now reached a new level with the release of a new report from the Intergovernmental Panel on Climate Change (IPCC) in August 2021. The UN Secretary General Antonio Guterres labelled the report as ‘a code red for humanity’. However, the IPCC concluded that we can still hope for the best ‘if there were a steep decline in coal use, greatly increased energy efficiencies, the development of new technologies and behavioural changes.’

For Bangladesh, one objective of development is to become a climate-resilient nation by building its adaptive capacity. Another objective is to increase the economic growth by integrating environment and climate change considerations. According to the Vision 2041 report, the aim for Bangladesh is that 80 percent of the population live in urban areas by 2041 should enjoy a quality of life that is comparable to the present day high income economies. As per the report ‘the productivity of land is preserved, forest resources are conserved and enriched, bio-diversity is improved and water resources are properly managed to prevent flooding and water shortages.’ Other appetites for change are that with proper drainage system cities should be free from flood, modern sewerage, proper waste management and clean air.

In terms of the environmental governance the political will is encouraging. The report includes some specific strategies, policies and reform such as to integrate environmental costs into the macroeconomic framework, implement the delta plan to build resilience and reduce vulnerability to climate change, reduce air and water pollution, sustainable management of forestry resource, strengthen environmental coordination and environmental institutions, strengthen climate change trust fund, develop a sound environment and climate change financing strategy and unlocking the potential of the blue economy.  According to the Vision 2041 report, ‘the blue economy comprises activities that directly or indirectly takes place in the seas, oceans and coasts using oceanic resources and eventually contributing to sustainable and inclusive economic growth, employment and well-being while preserving the health of the ocean.’ The good news is that while Bangladesh is realising the potential of the blue economy, it is also considering several ecologically critical areas in the coastal ecosystem. It has also established a coastal and oceanic research institute. However, international partnerships for strengthening knowledge and strategy for the blue economy are of paramount importance. 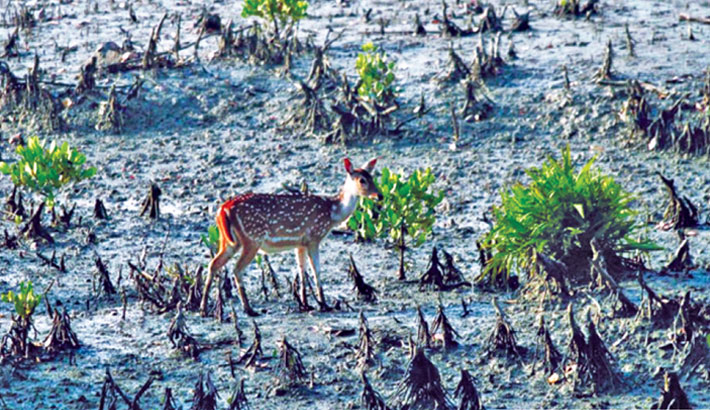 Within the context of global warming and climate change, it is now clear that a plan should start with sustainable economic growth, not the GDP fetish economy. Climate change and biodiversity loss are systematic, so they demand an economic growth, but the model of growth should be sustainable. In the building block of a sustainable economic growth consumption is an important parameter, but the choice of this consumption needs to be channelled into lower carbon one. In order to manage climate change the overall aim is to achieve net zero emission by 2050, not the gross zero emission.

Globally, three sectors are considered important for achieving net zero emission: agriculture, transport and energy. The government can play an important role in providing support for research and development (R & D) and technology for achieving net zero emission. In his book ‘Net Zero: how we stop causing climate change’, Dieter Helm suggests that in order to reconstruct a sustainable model we need to consider three principles. The first principle is ‘the polluter pays’. Climate change is caused by all sorts of pollution. The Vision 2041 report aims for ‘a sound mix of incentives and regulatory policies, including the application of the polluter pays principles and a decentralised implementation of environmental policies and programmes’. However, by introducing a price for pollution, Helm argues that ‘everyone is incentivised to stop emitting where it is easier to do so, leaving the residual emissions to those areas where the value of the carbon is the highest, and hence where it is most expensive to avoid the pollution.’ Helm further added that ‘a carbon price helps with those who are not persuaded to act morally themselves by creating a selfish incentive for them to switch from carbon intensive goods, not because they necessarily care, but rather just because they become more expensive.’

The second principle for a sustainable economy is ‘public money for public goods’. The government investment for the key public goods, may contribute to significant impacts on carbon emission. If Bangladesh, in their growth strategy thinks about blue economy, then supporting infrastructures are what public money for public goods is all about. Public goods are, in economic terms defines as ‘non-rival’. This means we can consume it without additional cost.  The task, as helm suggests is ‘to create a new sustainable economy, one that radically gets away from fossil fuels. However, almost all of our economies are dependent on fossil fuels, this is obviously an immense challenge.

The third principle for a sustainable economy is ‘net environmental gain’. According to helm, ‘the net gain principle requires that any damage done must be compensated for by more than the expected damage.’ For example, in UK property developers are required to ensure net biodiversity gain, when they build new areas for housing and other infrastructures. In a net zero carbon world, emission would have to be compensated for by emission reduction elsewhere, net carbon gain. Also one has to realise, what former UN Executive Secretary for Climate Change, Christiana Figueres said that ‘a fire that warms you on a cold night is good; one that consumes your home is bad. Likewise, technology is neither inherently good nor inherently bad; it just has to be managed properly.’

The climate change problem is the consequences of an unsustainable consumption path. This leads to the fact that we are all on an unsustainable growth path. By nature we are social animals. We have created cities and after that cities have created us. Our desire for consumption and expansion is based, not because we have plenty of resources in hand, but because we like interaction with other. It is not only the competition, but also the compassion for other matter. So, Aristotle was right when he said that we are a social animal. In this condition we need to tackle the climate problem together. The appetite for Bangladesh to achieve the natural environment in 2041, that resembles the high income economies, should realise the imbalance between consumption path and growth path and its implications.

Above all, the integration of environment and climate change issues in the development agenda means that Bangladesh need to embrace the philosophy that living within the environmental means is the best path to follow. The science of climate change is not a belief, a religion or a political ideology. It presents facts that are measurable and verifiable. So, politicians need to act fast and societies need to embrace the challenges for change.