Bangladesh under the leadership of Prime Minister Sheikh Hasina has adopted a national development plan called Vision 2041, an extension of Digital Bangladesh Vision 2021, to eliminate extreme poverty and achieve the upper-middle-income country status by 2031 and the developed country status by 2041 by eradicating poverty and ensuring a high economic growth. The three key components of Vision 2041 include developing effective institutions of governance such as a functioning judiciary, a pro-people civil administration, efficient land management, and proper economic management; second, greater democratization of society; and third, the decentralization of administrative and financial activities. What is the role of mass media in fostering the achievement of Vision 2041 goals?

Wilbur Schramm, a founding father of the field of Communication in his seminal book titled Mass Media and National Development: The Role of Information in the Developing Countries argues that mass media can play important roles in development. The role is more like a catalyst. The media can bring the authority’s attention to neglected areas, raise people’s aspirations for having a good life, and create a conducive environment for expected social change. They can play these roles by informing, educating, and entertaining people. Schramm weathered severe criticism from critical scholars for not factoring in the influence of political and economic forces on the media in articulating his postulate. Privately owned media are business enterprises with their primary goal to make a profit for the owners and protecting the interests of the advertisers.

The Bangladeshi media sector is marked by high political parallelism to use Hallin and Mancini term who define political parallelism as a “tendency for media personnel to be active in political life, often serving in party or public offices”. Many media owners, managers, and journalists are politically affiliated either with the ruling party or the opposition. Media outlets can easily be identified as either pro-government or anti-government. Anti-government newspapers sell better than pro-government ones as a large section of people is just cynical of everything the government does and appreciate anything that goes against the government. Media owners also employ their news media outlets for protecting their political and business interests. Consequently, journalism has been struggling to develop as a profession. Poor and irregular payment of salaries and the lack of job security kept journalists on the toes. Journalists’ professional associations are polarized to such an extent that they cannot stand together even to protect the basic rights of a news worker. Objective and unbiased journalism remains a far cry. 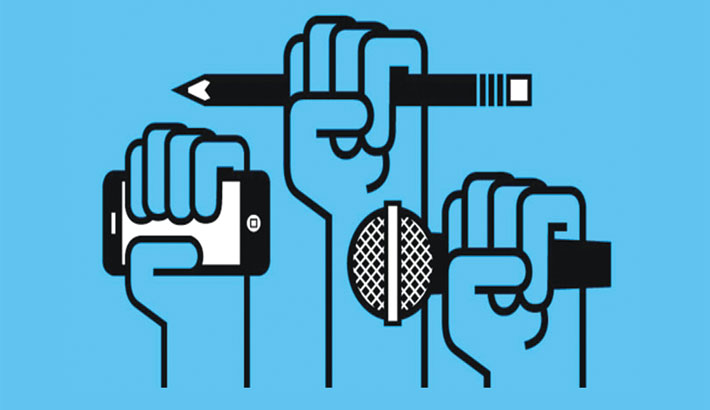 In addition, in recent days, the legacy media in the country have been rattled by the onslaught of social media that tend to set the agenda of public discourse. People rely more on Facebook and YouTube for news and information than legacy media. With the absence of gate keeping, gossips and rumours about different incidents create alternative realities or truth for social media users with the manipulation of audio and video. Partisan crowds on social media make them viral. The lack of proper monitoring and appropriate legal tools has transformed Facebook and YouTube media of rumours and threats to the public interest as well as the social order. Many communal riots such as in Ramu, Nasirnagar, Brahmanbaria, Noakhali, Cumilla, and Chandpur are testimonies of the dissemination power of Facebook for evil purposes.

If the legacy media have to contribute to the achievement of Vision 2041, they have to regain their credibility by practising objective journalism. They have to play the role of a watchdog and point out the successes and limitations of the development programs. The Awami League got the mandate for Vision 2021 in the general election of 2009 to build a Digital Bangladesh. Although the opponents laughed at the idea, Digital Bangladesh is now a reality. The proliferation of the Internet and e-services and the adoption of computer technologies have happened exponentially. However, Digital Bangladesh is still an unfinished project. Under Vision 2021, the government also initiated some mega projects such as the Padma Bridge, the Karnaphuli Tunnel, the Metro Rail, the Elevated Express Way, and the Nuclear Power Plant which are at the final stage. The completion of these projects will have an enormous effect on the economy and public life. The country’s economic achievements under Vision 2021 have been praised by the local, regional and international communities. At the UN forums, Prime Minister Sheikh Hasina has been appreciated with accolades for her visionary leadership and Bangladesh has emerged as a role model of development for the least developed countries.

Although the economic growth along with rising per capita income has reduced extreme poverty to a large extent, many people are still unmoved by the success stories as that hardly had any significant impact on their everyday life and in dropping down the unemployment rate. Cultural development that shapes people’s minds remained undermined. Like many other economic and development endeavours, art, culture, and sports activities remained concentrated in Dhaka city. People in rural areas sought lessons and entertainment in the toxic contents of foreign television channels and the sermons of radical Islamist preachers on Facebook and YouTube. Rampant propaganda and rumours on social media intoxicate people’s minds to deride the government’s good work.

Vision 2041 has rightly adopted the goal of securing high economic growth alongside addressing the outstanding tasks of ensuring inclusive development, strengthening governance institutions, democratization, and decentralization. The media can contribute to achieving these goals by identifying the limitations in the adoption and implementation of the development policies and projects, beneficiaries and excluded, and recommending courses of action to amend the flaws, and educating and encouraging people to participate in development activities. Legacy media have to have their social media wings for greater outreach.

The impact of the media’s role will hinge, on the one hand, on the growth of the media outlets as professional institutions, resolving their outstanding internal problems, and on the other, the state’s effort in appreciating objective journalism and fair criticism.

The writer is Professor of Film, Television, and Digital Media at the University of Dhaka.