By tradition, Bangladesh is an agricultural country. Though its 60 per cent share to GDP in the 1970s gradually came down to 12.65 per cent which is quite less than those of the service sector (54.69 per cent) and industry (28.79 per cent) in recent years. Out of this 12.65 per cent (considering agriculture as a whole 100 per cent), crops (including fruits and vegetables), livestock and fishery have the share of 51.44, 13.44 and 25.72 per cent, respectively. The rest 9.40 per cent belongs to forestry. The individual contribution of fisheries and the livestock sectors to GDP were, 3.50 and 1.47 per cent, respectively. This does not mean that the contribution of agriculture to the national economy has lost its importance. This is a relative figure. The production of rice, potato, and wheat were 10.59, 0.85, 0.11, 0.68 million MT, respectively in 1971. The respective productions of those crops were 35.3, 11.0, and 5.0 million MT in 2019. The same is the cases of the fisheries, livestock sectors also. It is better to say; livestock and poultry have experienced a quantum leap in some cases. The total contribution in the absolute figure to GDP has increased several folds in every field of agriculture. Accordingly, we have some satisfaction in the case of rice, potato and some vegetables, fishery, and livestock sectors. In contrast, we have still to go quite far to be satisfied with pulse and oil crops, minor cereals, fruits, spice crops, etc. Even rice is also imported at times though the amount is not much.

As per FAO 1996, a country is self-sufficient having the ability to satisfy the consumers’ need with staple food from its production rather than buying or importing. In that sense, Bangladesh is self-sufficient but sensitive to many of the unavoidable factors. Vis-a-vis, food security is defined as the easy access of enough food to every citizen of the country to maintain a healthy and active life. A healthy and active life for everybody is not possible without the integration of different components of agriculture in a systematic approach. So, it is better to say, we have achieved self-sufficiency in food to some extent but still, it would take some time to achieve food security. What we have achieved so far in agriculture is using exploitative technologies having some foot prints on the nature. So, we have to turn toward sustainable practices in agriculture without any or very little damage to nature. The ultimate objective is to achieve food security in the shortest possible time through the maintenance of self-sufficiency in food. 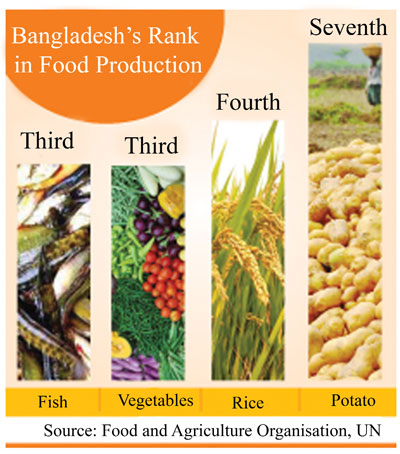 The technologies so far used in agriculture are mostly based on non-renewable resources like water and fertilisers and related agrochemicals. Most of the soil of Bangladesh is poor in organic matters and every piece of field is under continuous crop planting. There is still a communication gap between the farmers and the scientists including extension agents. So, the huge nutrient loss is overlooked. More so, the nutrient uptake by the crop is not completely replenished by the required quantity of fertilisers during cultivation. There is little scope for the soil under intensive cropping to be recharged naturally. It means the soil remains hungry and in the long run, it gets too weak to support the crop to yield a sound harvest.

The most important factors for growing crops are soil, environment, and water. Soil provides physical support and acts as the primary source of nutrition for a crop. Water and the environment maintain the necessary physical and physiological functions of the crop. These three factors are now in the most vulnerable state due to human intervention. The practice of excessive tilling is a common exercise in many of the cases which cause soil erosion and the result is land degradation. The misuse of fertilisers (urea, TSP and MP) is a common factor in our country. So, there is every possibility of eutrophication in nearby water bodies due to washed away fertilisers. Even the excess amount of manure used in organic farming might result in the same. Urea is produced from the nitrification of hydrogen derived from natural gas which is not renewable. Phosphorous fertilisers are produced from the rock phosphate collected from the few mines of the world. The reserve of this essential mineral is limited and going to be exhausted within five to six decades. So, the practicing agriculture with non-renewable resources is quite alarming for us.

Nowadays, sustainable agriculture based on renewable resources is a much talked-about issue. It is an eco-friendly farming system approach good for the production of crops or livestock without any damage to human or natural systems. In reality agriculture without doing any harm to nature is almost impossible. So, the definition should be revised as “the practice of farming system with all the components of agriculture to harvest the maximum benefit in exchange of minimum ecological harm”. Side by side, there should be some options to revive (if possible) the nature facing such damage due to human intervention. Anyway, we have to follow this kind of sustainable agriculture shortly for the betterment of our upcoming generation. But we have to turn that way gradually to get ourselves ready with appropriate technology and mental preparation. Sudden diversion towards sustainable practice might affect the self-sufficiency in food.

The manipulative nature of agriculture in the name of the green revolution instead of traditional practice was initiated in the early 1970s by our predecessors.  The wheat and rice varieties were developed having the ability to uptake more nutrients from the soil to translate them as the grain-straw ratio of 50:50. By nature, most of the soil was not able to supply the necessary amount of nutrients to the crop. That is why they needed the rest of the nutrients from external sources as fertilisers. There was no choice during that time but to grow more food, an effort to feed the hungry millions. Even agriculture science was not equipped enough to provide an alternative solution equivalent to that of sustainable agriculture. Anyway, the Bangladesh government is aware of the impact of modern agriculture on the economy and the environment. The government is now in progress with a lot of plans from different angles with a single target to make the country developed by 2041. Before that, the country has to be resilient in self-sufficiency in food under any kind of fragile environment. Not only that, the country has to double agricultural productivity by 2030 to satisfy the SDGs. By this time, we also have to make significant progress towards the achievement of food security. The ruling party Bangladesh Awami league through a perspective plan designated Vision 2021 in its election manifesto in 2008 to utilise the enormous potentiality of the country towards becoming a middle-income economy. This perspective plan (2010-2021) was designed to ensure food security by eliminating food deficiency and meeting the nutritional requirements of the general mass through self-sufficiency in rice production, crop diversification, formation of cooperatives, reduction of knowledge gap among the youths interested in closed water fishery, formation of cooperatives of fishermen, development of improved livestock breeds, provide farmer-friendly veterinary services, etc. The per capita income of Bangladesh is now US$2,138.79; already exceeded the threshold level of US$2,000 to be adorned as a middle-income country. This has become a reality because of the integration of agriculture and the other sectors under the strong leadership of Sheikh Hasina, the Honourable Prime Minister of Bangladesh. The regular national plans like the 6th Five Year Plan (FYP) (2011-2015) and the 7th FYP (2016-2020) plan were in action during the period of Perspective Plan (2010-2021) i.e. Vision 2021. The activities to achieve the Millennium Development Goals (MDGs) were in operation until 2015. Bangladesh received the UN award for significant achievement of MDGs. Vision 2021 is heading towards successful completion at the 50th anniversary of the country. Now it’s time to get ready for the next journey towards vision 2041, a strategic plan to reach the country to the level of a high-income economy. The strategic plan has emphasised sustainable agriculture for food security. But this sustainability is not just based on renewable resources but the integration of both renewable and non-renewable resources with a proper understanding of nature that is in alignment with the revised definition of sustainable agriculture. To achieve the target some of the drivers of a paradigm shift in crop-agriculture is suggested in the perspective plan as follows:

•             Scientific innovation other than varieties: Innovative agronomic practices, cropping patterns, pest control methods and strategies, relevant green technologies should be developed and applied as and when necessary.

•     Soil health management: Promotion of balanced fertilization through integrated plant nutrition system (INPS), getting nutrients from both the organic and inorganic sources, to be acquainted with crop zoning map and digital techniques of fertilizer use, following conservation agriculture, retaining crop residues in the field, following legume crops in the traditional rice-rice cropping system, retaining sufficient crop residues in the field, the reduction of knowledge gap of farmers through intensive extension service, etc. are necessary to revive and sustain the soil health.

•      Water resource management: Irrespective of sources the water use should be minimized through management, development of water-efficient crop varieties, use of sensor-based irrigation equipment. Water pollution to be minimized.

•      Agricultural credit: Credit is a kind important input with the recent innovation in agriculture helps to generate employment and poverty alleviation leading to food security.

•             Agro-processing, value chain, and exports: Intrapreneurs should be encouraged to produce, develop storage facilities, and set up processing and packaging industries to maintain the international standard so that the products could be exported EU, USA, Japan, Russia, China, etc.

The contribution of fishery and livestock sectors is remarkable towards food security. The fishery production was around 2.0 million MT in 2001. The present production is more than 4.0 million MT where the contribution of inland capture fisheries is 60 per cent. Bangladesh is now self-sufficient in fish production. The daily per capita fish consumption is more than the daily per capita demand of 60 gm. Now a poor man can afford to take a piece of fish daily. The livestock sector performed quite better during the 6th and the 7th Five Year Plan (2011-20). Bangladesh is now also self-sufficient in meat and egg production. Milk production has increased more than four times during this time and is now in a position to satisfy the national demand within a few years. Thus, the livestock and fisheries sub sectors could play important roles in nutritional security which is difficult to achieve from crop agriculture alone.

We had the opportunity to bring into line many of the SDGs with the 7th FYP. The same should be the case with the 8th FYP and to make the total agricultural productivity double in a sustainable way. The government along with the scientists are quite optimistic to satisfy the SDGs and the other targets set by different Perspective Plans. We still have two decades in hand to reach 2041. Towards the sustainable farming approach,  the research on the farming system, precision agriculture, molecular biology, genetic engineering, nanotechnology, renewable energy, biodiversity; in-situ conservation of germplasm, soil health management, conservation agriculture, pest management, socio-economic and marketing aspects of agriculture, one-health approach, maintenance of aquatic ecosystem, animal health care, etc. are in progress to develop resource-conserving, socially supportive, commercially competitive and environmentally sound total agriculture i.e. sustainable agriculture. I am sure we are on the right track and will reach the target of food security through this track well ahead of time provided we have the integration of political determination, scientific innovation, intensive extension, and communication activities with farmers. Of course, the main target is the farmer and they are with us with their talent and toil.