A recent research titled “Bangladesh: Looking Beyond Garments” and conducted by the Asian Development Bank (ADB) has revealed that the positive economic turnaround in Bangladesh is largely due to the rising presence of women in the workplace. In a country where the ready-made garment sector has resulted in the employment of roughly 4 million nationals, new opportunities arise. As the vast majority of the RMG workforce is consisted of women, this industry has given the women some kind of economic autonomy, particularly to those who were accustomed to living under the strict restrictions of patriarchal society. The economic liberty entices women from poorer backgrounds to free themselves from the chains of male domination and provide for their families. However, many come to realise that the garment industry is riddled with contradictions and disappointments. Failure to comply with basic workers’ rights leads many women down an industrial path paved with false promises and the threat of exploitation. In a desperate bid to secure employment, women readily subject themselves to harsh working conditions and informal employment in the hope of availing of a fixed contract some day. Many may question as to why the exploitation of vulnerable women in the workforce prevails in Bangladesh. Is it the consequential result of ignorance? Has the hierarchical system of education failed working-class women? Can lower class women realistically rise above the status of “underpaid labourer” in a country that predominantly regards them as worthless as a result of their gender and pitiful economic status? Does anyone truly believe that in a developing country like Bangladesh, poverty-stricken women and girls can alter their circumstances and become economically prosperous in their own right? Will the perils of exploitation and corporate greed continue to hinder their personal and professional development? The only thing certain now is that the exploited female workers of Bangladesh are in dire need of solutions.

The “Looking Beyond Garments” report emphasises that in spite of the robust growth of women in the labour force, gender disparities persist. The findings also suggest that while there has been in a significant increase in employment in recent years, the impact left on the labourers has been a far cry from the life-altering opportunity they initially envisioned. As unsafe working conditions, low earnings, and informal unemployment cease to discontinue in the fast paced, export-oriented garment sector, the ADB urges for a diversification of production. The ADB believes the exploitation in the garment industry may be weakened if a demand rises for female labourers in the now male-dominated agricultural and manufacturing sectors. In this way, women could avail of enhanced employment opportunities in workplaces that value their fundamental rights to a decent wage and safe working 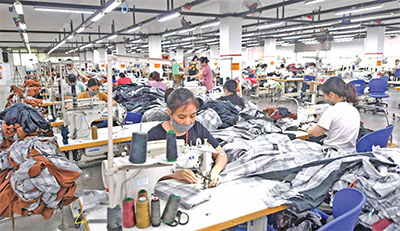 conditions. Although a high number of Bangladeshis perceive the new wave of female workers as a stepping stone to empowerment, many women are still tied down by the setbacks of ‘Purdah’, a religious and social practice to restrict their mobility in spite of the economic independence. ‘Purdah’ is defined as the broad set of norms and regulations that advocate for the seclusion of women and enforce their exclusion from public places. The practice of ‘Purdah’ also entails the segregation of the sexes in the workplace. A study conducted in rural Bangladesh revealed that women who practiced ‘Purdah’ spent 60% of their time in household work, whereas men spent the majority of their time in crop cultivation and wage labour.

Women were only granted access to labour in times of hardship, when demand for male labour is high. There are two sides to the argument. On the one hand, employment outside of house contributes positively to some measures of autonomy for women and on the other, entering the world of labour presents many risks to women in a country plagued by gender-based violence and harassment in all sectors of society, even in the workplace. A further challenge presents itself through the perceived female threat to masculinity. As tradition requires males to take on the status of “sole breadwinner” in the family, many men feel frustrated over the rapidly evolving economic status of women in Bangladesh. In some cases, the possibility of domestic violence increases as unemployed men experience feelings of humiliation and self-hatred due to economic dependence on their wives or female relatives. In Bangladesh, this issue is particularly critical as the base level of gender-based violence is extremely high. Although many women have secured employment, encouraged by the economic necessity of their families, the setbacks of the age-old tradition of ‘Purdah’ persist. Oftentimes, women’s paid work is regarded as a temporary measure during a period of financial struggle. Even under these circumstances, employment is widely considered as undesirable and unfit for a woman whose intrinsic occupation lies within the safe walls of her home. In lower-class areas, many women who travel to work on a daily basis still require permission from their husbands or other male relatives to travel elsewhere. In a survey conducted in an urban slum dwelling, 60% of married women who worked outside of their residential area said that they still need spousal permission to visit a friend.

The problem of restricted mobility is still rampant in many rural areas of Bangladesh with 44% of married women aged between 20 and 24 claiming to be not allowed to make their own decisions about visiting their relatives. The reason is many men fear the autonomy a growing economy can bring to the women of Bangladesh. However, in urban areas, the fervour for female empowerment has already spread at a steadfast rate. Women are no longer willing to accept the repression tied to tradition. A recent research study found that urban women engaged in formal work outside their residences had higher measures of independence, in terms of mobility and decision-making power within the household. Women in urban areas have increased access to employment. A vast array of employment opportunities results in the higher female labour force participation rates, increased accessibility to education and an active decision to marry and conceive children later. In fact, education levels are drastically improving across the country and the future of Bangladesh’s next generation of empowered women shines bright. What’s more, Bangladesh has easily reached the Millennium Development Goal of primary and secondary school gender equality: in 2011, there were 110 girls enrolled in primary and secondary schools against every 100 boys, a report by the World Bank confirmed. As long as this positive trend in education advances and the government of Bangladesh continues to focus on the improvement of conditions for women in the working place, women from all socioeconomic backgrounds will be granted more and more access to information about their rights.

Eventually, the respect they deserve in the workplace will no longer be a privilege, but a guaranteed right. It is the time we break the barriers blockading the male-dominated working world and recognise women’s positive contribution Bangladesh’s economy. As the “Looking Beyond Garments” report confirms “If the labour force participation for women was raised to the same rate as for men, the labour force of Bangladesh would be increased by 43%.” With an increased desire for female empowerment coupled with the female-led government’s thirst for equality, soon, the majority of women will not be confined to menial household duties; rather, they will become the driving force behind Bangladesh’s growing economy.

The writer is a Director of Bangladesh Satellite Company Limited