Methila confirmed the news on a Facebook post on Sunday. He wrote, “The wait is finally over! ‘Rohingya’ releasing on Apple TV worldwide on November 15.”

Produced by Thunder Dragon Production, Haider Khan is the director of the Bollywood’s feature film.

Alongside directing, Haider Khan has also written the screenplay and dialogues of the production. He has worked as an assistant director for superhits such as Commando, among others, and is also a skilled photographer. 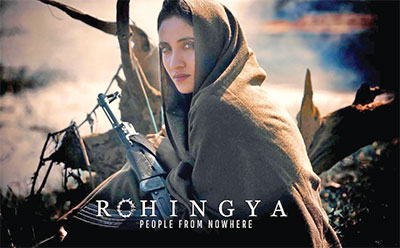 The film Rohingya highlights the unspoken story about Rohingya people, who had fled violence in Myanmar to settle in Bangladesh over the last few years.

Methila will be seen a Rohingya woman named Husne Ara in the film. Winner of Mr Bhutan 2017, Sangay Tsheltrim, will be seen opposite Methila in this film.

About the movie, Methila said to the media, “I’m playing a Rohingya girl named Husna Ara. To play my role, I have had to learn to speak the Rohingya language. I believe our film is going to be absolutely different from most mainstream Bollywood movies.”

This is the debut film of Haider Khan as a director. Haider has previously directed promos for Salman Khan Films as well as several ad films and videos.

Tangia Zaman Methila is a model, television host, actress of the country. She was crowned Miss Universe Bangladesh 2020.