Korean Ambassador to Bangladesh Lee Jang-keun paid a three-day visit to Chattogram and held a series of dialogue with the business community in the port city.

The visit aimed to further strengthen economic ties between Korea and Bangladesh. The envoy visited the city from October 16 to 18.

His visit to Chattogram covered a wide range of engagements with Korean community, business leaders and government authorities and development partners.

This was his second visit to the city, considered the gateway to Bangladesh.

On October 16, Ambassador Lee held a dialogue with Korean community in Chittagong by hosting a banquet. Congratulating the establishment of the Association of Koreans in 2021, he reaffirmed his commitment to ensure safety and support business activities of Korean people in Chattogram.

Around 300 Koreans are living in the city with more than 50 companies under operation. 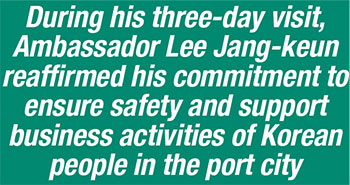 The meeting was a highlight of the Korean envoy’s visit to the second largest city in Bangladesh, said a press release of the Korean Embassy on Sunday.

The anovoy emphasised the importance of Chittagong with regard to Bangladesh economy and the role of entrepreneurs in enhancing economic ties between the two countries.

The ambassador reaffirmed his commitment to making efforts to elevate the bilateral relations to a new height through extensive engagement with the business community here.

In his presentation on the bilateral relationship between the two countries focusing on trade and investment, Ambassador Lee said Korea and Bangladesh have a great potential to further reinforce its economic relations in many areas beyond Ready-Made Garment (RMG) industry.

A number of business leaders from both countries and government agencies participated in the meeting.

Appreciating the support to the Koreans living and doing business in Chittagong, Ambassador Lee requested the government officials for continued support for the safety and security of Koreans and their business.

Ambassador Lee also visited the site of the cyber investigation centre at the Criminal Investigation Department of the Chattogram Metropolitan Police to be established with the Korean support by 2023.

Ambassador Lee participated as an observer in the Board meeting of the KBCCI held in KEPZ premises.

During the meeting, the Korean envoy reaffirmed his commitment to strengthen his engagement with Chittagong where more than 90 percent of exports and imports of Bangladesh passing through.

The second largest number of Koreans are living in Bangladesh.