Undoubtedly, autumnal Durgapuja is the biggest religious festival of Bengalee Hindus all over the world. Idol is an essential concomitant of not only Durgapuja, but of any puja. Grammatically, a goddess is a female deity. It is difficult, even impossible to depict faces of gods because nobody has seen them. The concept of god or goddess is created by human beings based purely on imagination. Face of a beautiful girl is compared with Goddess Laxmi. Except Goddess Kali all other Hindu goddesses are portrayed as beautiful, charming and attractive. As every Hindu goddess is addressed as mother, an affectionate touch is imparted on their faces.        According to prevailing belief, standing on her carrier lion Goddess Durga holds 10 powerful weapons to fight against Mahisasur (the buffalo demon). Since long ahead of Durgapuja, artists (potters, sculptors and others) become busy with making idols of Goddess Durga, mainly with soil. To bring novelty, other materials like bamboo, cane, paddy, rice, rags, plastic bottles, corks, match sticks, nails, soap and peanuts, et cetera are used in many places, particularly in West Bengal. Pandemic has dismantled many practices, but the tradition of preparing idols is continuing though in curtailed, but different ways by displaying various themes.

A report of the News 18 Bangla of Kolkata dated 19th August, 2021 informs that the face of Goddess Durga will remain covered with gold (not golden) mask. Instead of 10 arms, her 10 hands will hold sanitiser, pulse oximeter, mask and thermal gun et cetera. On the morning of Khuntipuja (worship of the pole) Mother Durga arrived on the Ashwininagar Friends’ Club premises, Kolkata, but why this unique dress and so early?

Normally, the bell of Durgapuja rings on the day of Rathhara (three months ahead of Durgapuja). Worship of a bamboo (or wooden) pole marks the advent of Goddess Durga, but idols are placed later. Members of the club claim that people must be aware of the third wave of corona pandemic, but as the blow of the second wave has reduced, mask has begun to disappear from people's faces and awareness is dropping down. If this trend continues, it will not be possible to prevent the apprehended third wave. That is why, mother with mask on face has been brought so early to make people aware of the issue. The MLA of that area told that mask is a must for protection. Gold mask of the idol is a symbol. She added, “If an astrologer tells you that mask will bring fortune then you would wear it. Then, why not a mask for protection? I request everyone to wear a mask." 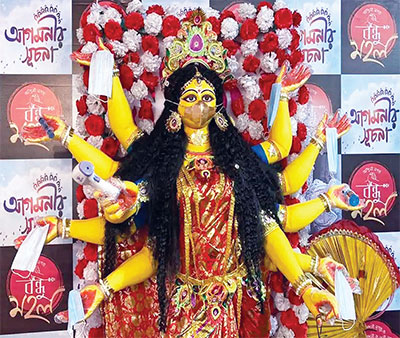 The Secretary of the club said, "In 2020, we announced that the club will take responsibility of education and marriage of two poor girls of this area. The mother of the two girls here is suffering from cancer and their father is also ill. Currently both the girls are studying. After immersion, the gold mask worn by mother Durga will be handed over to the family for preparation of their marriage. Or, we shall give sale proceeds of the mask to that family.” This is certainly a philanthropic initiative.

No such initiative to mask the Mother has been noticed in Bangladesh, but devotees (please read - visitors) must be masked and all health rules framed by the government should be strictly followed to remain free from the contamination. Puritans may object to the idea of covering the face of the goddess though it is a positive change in thinking but a different type of change has already occurred. At Chakdah, Nadia, West Bengal, Chief Minister Mamata Banerjee is being worshipped as Goddess Durga in this year. While addressing a party meeting on 21st July former party MP Kabir Sumon said that after many years the state will get a temple named after Mamata Banerjee. There she will be worshiped as a goddess. May be he said it ornamentally, but the people of Chakdaha have taken it literally. Without waiting for future they have implemented the idea right now and the idol of Chief Minister Mamata Banerjee has been erected there.

However, Mamata Banerjee is not ten-armed there, but two-armed, saluting the people with two hands folded, wearing her trade mark blue fringed white sari and rubber slippers as everyone is habituated to see her. The idol made of fibre glass exactly resembles her. This Mamata is standing in front of a map of West Bengal where the districts are clearly demarcated and named. Behind her idol, 10 hands like Goddess Durga are displayed which probably symbolise 10 welfare projects of her government.

Fans of Mamata Banerjee may say that Durgapuja is celebrated expecting happiness, peace and prosperity in life. Among common people, Chief Minister Mamata Banerjee is a symbol of that hope. She is continuously working for welfare and better life of people. So, there is no problem if that extraordinary lady is worshiped as divine.

On the other hand, those who initially think Durgapuja as a part of religious practice, feel mentally injured believing that it is degrading the goddess. There was a time when faces of goddesses were portrayed in the form of the faces of heroines of Hindi films. Hemamalini topped the list. That same craze is being repeated where not devotion, but political stunt and idea of applauding in the name of religion is dominant. If fans of Mamata Banerjee really consider her a goddess, they can pay homage through work, not by worship.

Apart from religious range, if it is thought that Durgapuja is a cultural side of life then also such practice is unethical, as many people think. They say that Bengalees are naturally big pagans. They make everything adorable. Idol is made, placed on altar and worship begins. In this way, Rabindranath Tagore has become an idol, but nobody reads his writings. He is trapped within books. Similarly, greats like Rammohan, Gandhi, Vidyasagar, Vivekananda, Subhaschandra and many others have become just clay idols on intersections of crowded roads. Their ideals are not practissed whereas Bengalees had many things to learn from them. Will Mamata Banerjee's honesty, struggle, plain and simple lifestyle, straightforward words eventually become a matter of idolatry? 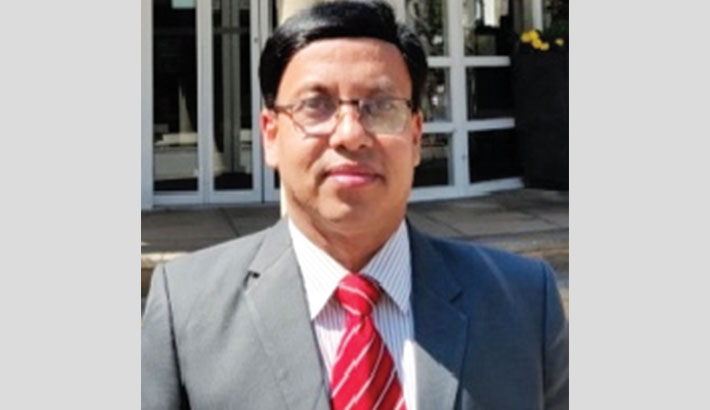