They also said Bangladesh Nationalist Party (BNP) is hatching a conspiracy to foil the forthcoming general election and hinder the development spree of the incumbent government, vowing that they will not let it happen.

The AL leaders made the remarks during a visit to a Durga Puja mandap at Ganesh Pagoler Mandir in Polsair village under Hiron union in Kotalipara upazila on Thursday night.

District AL General Secretary Mahbub Ali Khan said residents of Kotalipara are fortunate as their lawmaker is none other than Prime Minister Sheikh Hasina and she thinks of Kotalipara all the time.

“She greeted all of you on the occasion of Durga Puja. Pray for Prime Minister Sheikh Hasina so that she remains well and healthy. If she remains well, Bangladesh will remain well,” he said.

Later, Mahbub handed over the financial assistance from the personal fund of Prime Minister Sheikh Hasina to different temples under the upazila.

“Tk 3,000 has been given by the Hindu Kalyan Trust for each mandap while 500 kgs of rice have been allocated for each temple from the government,” he said.

“Many party leaders and public representatives have made donations to the temples. It has been possible to celebrate the occasion in a grand manner with the donations received by the temples. This is possible because the premier remains in power,” Bimal added.

Ainal Sheikh alleged that a section of people is trying to fish in troubled waters over the Cumilla incident. “But their evil attempt won’t succeed. Awami League leaders and workers remain vigilant. No evil clique will be allowed to raise their ugly heads in the country,” he said.

“We, the Kotalipara people, are wishing our beloved leader a long life so that she can serve the people of the country,” he added. 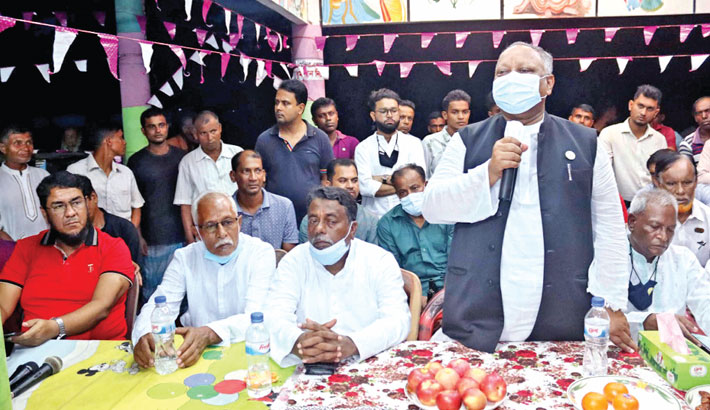