The Disability Rights and Protection Act in 2013 has mentioned mental illness-related disability as the third of six types of disabilities. That is, if a person's personal, family, social life is disrupted due to long-term mental illness, then it will be considered as a disability due to mental illness. Treatment and rehabilitation of mental illness: It is possible to bring mental illness under control by identifying it at an early stage and bringing it under medical care. Treatments include medicine, psychotherapy, counseling, and occupational therapy. This means that a mentally ill patient can return to normal life if s/he receives treatment through a multi-disciplinary team. We all have to stand by them.

Good health is good physical and mental health. Physical and mental well-being complement each other. It is not possible to achieve mental well-being without physical well-being. Mental illness, on the other hand, affects physical well-being. Although physical illness is visible, mental illness is not visible in the early stages. It is visible when it assumes a deadly shape. This person-centered problem also appears to be the cause of his family and social problems. Another mental problem is 'anxiety'. The person with the problem worries too much about anything. Fear of losing family members or important things always worries them. Even the tendency to have serious suspicions about others is harmful. Although it seems normal at the initial stage, the family and social life of the person with this problem may be disrupted later on. Another condition in mental illness is 'depression'. An estimated 190 million people worldwide suffer from depressive disorders.

Sustainable Development Goals (SDGs) specifically address health and well-being in agenda 3. Excluding mental health, we cannot achieve the goal of sustainable development. It is important to decentralize mental health services to suburban, rural, and remote areas. Training on mental health is essential to create a skilled workforce. Training should be given from district hospital to community clinic.

Around 23,72,29,503 people have been infected with coronavirus worldwide over the last one and a half years and at least 48,24,520 people have died of the virus. The approximate number of deaths in Bangladesh is 27,591 (as of 5 October 2021). COVID-19 is a viral disease but the extent of the disease is so boundless that it transcends the dangers of physical health and is devastating us mentally, socially, and economically. 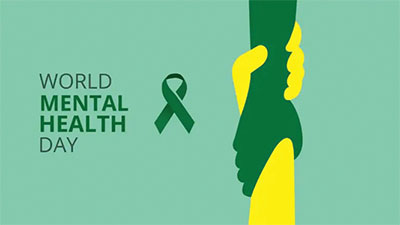 As a result, no one knows when this crisis will be solved. It is difficult to find the answer to this difficult question of what will happen in this reality. 36 percent of people have been fired from jobs due to corona. Although three percent of the people have jobs, they do not receive salaries and allowances. Most of them are middle class. So, what is the way to overcome the crisis? During this crisis of corona infection, the government has taken development activities and people-friendly measures for the overall protection and livelihood of people of different professions. All these measures are contributing at least a little bit to keep the wheel of the stagnant economy running.

According to a study by the National Institute of Mental Health, 12.8% of people in Bangladesh suffer from depression. In other words, in this country of 160 million people, the number of patients suffering from depression is more than two crores. According to the doctors, depression is a mental and physical disease at the same time. Now the question arises from the source of these statistics, how favourable or not at all favourable is the environment of the country for the patients suffering from depression and mental illness? The environment here refers to the family, social, and the whole national environment. Mental disorder is not a shameful disease. Like all other ailments of the body, there can be mental ailments, which are neither equally obvious nor acceptable in our society. On the contrary, his/her family cannot be easy with the person who suffers from this problem. The family suffers from an inferiority complex. Which has many bad effects on the life of that person. The whole family is always confused about the person who has gone through a changed psychological state.

During the COVID period, every person in Bangladesh is under stress. Of these, about 34.9 percent of youth and young women are under various types of mental stress. Suffering from such mental instability, 70.8% of the people are physically harming themselves. There is also a tendency to commit suicide as a result of various mental stresses. A survey of service providers working with young people's mental health found that. The high number of suicides during the Corona period has caused concern. Many are working to identify the causes of various mental health problems, the causes of suicide, and to find solutions. From March 2020 to February 2021, there were a total of 14,438 suicides in the country. According to 322 suicide case studies, 49 percent of those who committed suicide were between the ages of 20 and 35. And 56 percent of them are women.

According to the data available, most young people suffer from mental depression. Being upset most of the time, losing interest in the job of choice. Abnormally more or less sleep, loss of focus at work, negative thoughts, suffering from indecision in everything. Research has shown that when these problems become severe, the tendency to commit suicide increases. The main reason is not being able to talk openly with anyone about their mental instability. If you are upset or depressed, share it with friends, family, and through various social media. Most spend more time daily than usual through social media which is upsetting them mentally. Many people spend more than 8 hours a day on social media. They also mentioned that their mental health interferes with their daily activities. Of these, 91.4 percent have never consulted a psychiatrist.

Multiple studies show that one in five people infected with corona develops coronary heart disease, such as depression, anxiety, and psychosis. Experts say that the rate of stress, anxiety, depression, and panic among people who are not affected by corona and health workers is many times higher than usual. Even if you recover from corona, there is still a risk of mental problems.

Mental problems have also increased in Bangladesh during the COVID period than usual. Mental distress is exacerbated by fears of corona infection, uncertainty about access to medical care, fear of death, economic turmoil, unemployment after losing a job, and even misconceptions about corona-negative social inequalities. And there is stress among health workers at all levels engaged in corona treatment that is harming their mental health. Even in Corona, domestic violence and gender-based violence have increased around the world.

Infected deaths, panic attacks if infected, fear of infection by family members, loneliness during isolation increases stress, panic attacks on family members, scary news in the media, poor hygiene, insomnia, and frequent insomnia. These are the reasons for many to be upset, to be overly anxious, to be restless, to be terrified, and to be afraid of death.

However, it is important to remember that in this critical moment, it is normal to be panicked, stressed, or frustrated. The whole world is facing an unusual situation. But if one is panicked his/her immunity gets reduced and the risk of various kinds of infection increases. So, everyone needs to increase their skills to deal with stress.

The writer is a Research Fellow, Bangladesh NGOs

Network for Radio and Communication (BNNRC)