The head of the government apprised the President of the outcome of her recent US visit, he said.

The Bangabhaban spokes-man said during the meeting, the President and prime minister enquired each other about their health. The President was apprised by the PM about the overall activities of the government, especially the steps taken to tackle the  COVID-19 pandemic  and  ongoing  vaccination programme.

The President congratulated the Prime Minister on receiving the 'SDG Progress Award' in recognition of her leadership in achieving the Sustainable Development Goals (SDGs),  declared by the United Nations .

The President appreciated the overall role of the Prime Minister in the UN session.

The President also wished the Prime Minister on the occasion of her 75th birthday on September 28.

Earlier, the premier reached the Bangabhaban at 6:30 pm and left the President’s palace at about 8 pm.

On her arrival, the premier was received by President Abdul Hamid and his spouse Rashida Khanam with a bouquet. President’s son Rejwan Ahammad Taufiq, MP was  also present there.

The prime minister also presented a bouquet to the head of the state.

PM’s Principal Secretary Dr Ahmad Kaikaus, and senior officials concerned to the President and PM office were present during the meeting .

The premier briefed the President about the outcome of Bangladesh's participation in the 76th UNGA session.

Sheikh Hasina went to New York on September 19 to attend the 76th UNGA in person which was her maiden foreign tour after two years since the COVID-19 outbreak .

She spent busy days during the New York visit from September 19-24 and joined 10 high voltage meetings, including main session of the 76th UNGA and eight bilateral talks there.

During the UNGA in New York, PM Sheikh Hasina  on the very first day of her visit on September 20, was conferred with “SDG Progress Award” by the UN Sustainable Development Solutions Network (SDSN) for Bangladesh's highest success in attaining SDG during 2015-2020.

The  prime minister addressed the general debate of UNGA where she spoke in Bengali this time too following the footprint of the Father of Nation Bangabandhu Sheikh Mujibur Rahman  . 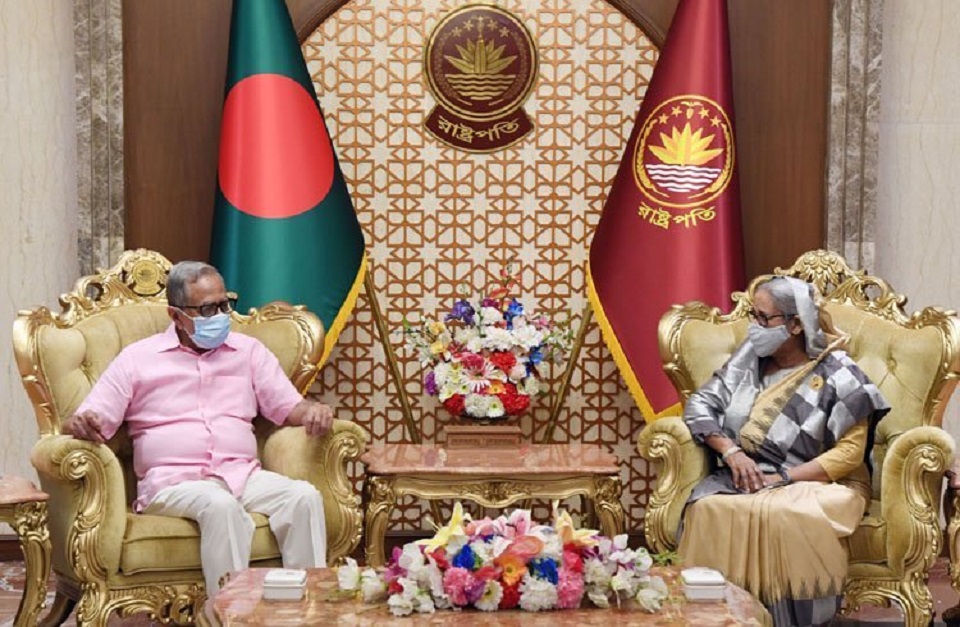 PM calls on President at Bangabhaban