The government is working to frame a policy to promote the use of electric vehicles across the country by setting up charging points at the fuel stations.

The policy is expected to be finalised by December this year, officials related to the development confirmed the Daily Sun.

“We are working on the policy. Multiple stakeholders are being engaged in formulating the policy to support the use of electric cars. It may be completed by the end of this year,” Mohammad Alauddin, chairman of Sustainable and Renewable Energy Development Authority (SREDA) under the Power Division, told the Daily Sun.

He said there is no alternative to adopting electric cars to introduce an eco-friendly transportation system, reduce carbon emission and save the environment.

SREDA has been working to promote alternative resources of power to attain sustainability in the energy sector. 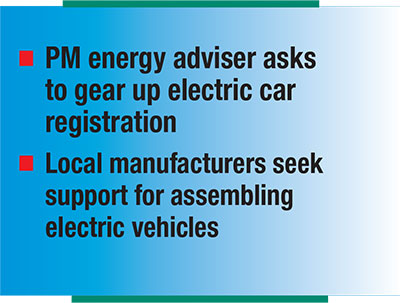 The Power Division is designated to formulate a framework for supporting the use of electric cars in the country.

Prime Minister’s energy adviser Dr Tawfiq-e-Elahi Chowdhury at a meeting asked to the BRTA chairman to take necessary step for registration of electric cars as the car has a great prospect in future transportation services.

The government is going to popularize the electric cars at the when it faces a criticism on around 40 percent unused electricity. The country has over 22,000MW of grid electricity.

Besides, the local assemblers and manufacturers of automobiles said electric cars will be produced in Bangladesh. They have sought prudent policy for the production and use of electric cars to catch the opportunities in this sector.

According to Bangladesh Automobiles Assemblers and Manufacturers Association (Baama), locally produced cars are expected to hit the streets within the next ten years.

Baama senior vice president Taskeen Ahmed said electric car is the future, but having the necessary infrastructures is important to support the battery-run commercial vehicles.

“The manufacturers can assemble electric cars with present industries policy. However, charging infrastructure and investment are two major things to move forward. Some of the local companies can think about electric car assembling. However, the volume of investment is very high compared to other industries,” Taskeen, former managing director of IFAD Autos, told the Daily Sun.

At present, some companies are importing hybrid cars which offer the option to use diesel apart from the battery.

Energypac Power Generation managing director Humayun Rashid said the country is yet to ready for electric vehicles as there should be a battery industry on a huge scale.

“Electric cars use huge batteries, which is a separate industry. We found that many developed countries including the US are putting more focus electric car industry. Besides, China and India are testing the possibilities,” Humayun told the Daily Sun.

He called upon the government to formulate a prudent policy for electric cars as the industry has the potentiality to fetch huge foreign investment.

Some local manufacturers can come forward to assemble an electric vehicle in a joint venture with foreign companies, he said. Bangladesh Auto Industries Limited has received 100-acre space at Mirsarai in Chittagong and Bangabandhu Industrial City to manufacture electric vehicles. The company started infrastructure development in 2018.

‘Huawei incorporates green development into everything’