Wishing our Jononetree Sheikh Hasina many happy returns of the day! Happy Birthday to Jononetree Sheikh Hasina! The birthday of our honorable Prime Minister, particularly for this year, has brought the people of Bangladesh a very surprising prestige, mainly because she attained the SDG Progress Award. The UN has awarded her such a rare prestige for stable development, replying to the worldwide demand to act culminating poverty, defend the planet, and confirm peace, harmony, and prosperity for the people in general.

When we achieved independence in 1971, we had the only hero in our country eliminating all others by its brightness and magnitude. That Icon had been the definite conqueror of the freedom fight, the Father of the Nation, Bangabandhu Sheikh Mujibur Rahman. With all the expanse of his huge heart, he used to love from his heart the Bengalis. Therefore, he expended every single drip of perspiration to yield the war-ravaged new nation towards steady progress. Bangabandhu tried to the best of his ability to uphold the dignity of a new government in the global context using the land's potentiality. Unfortunately, the severe gunshot of the assassins had not spared Bangabandhu adequate phase to make his dream come true. However, we see the rise in the firmament of the nation's fortune, Bangabandhu's worthy inheritor Jononetree Sheikh Hasina as the saviour of the Bengali nation. She has also been the best inheritance of Bangabandhu's lifeblood. Over the past decade, Jononetree has been steering the land to range such a mounting stand of expansion that ADB has happily professed Bangladesh the wildest rising financial progress in the Asia-Pacific area, exceeding China, Vietnam and India. In any global setting, while Bangladesh's advance turns out to be an issue, the person qualified as the symbol for the current financial expansion of Bengal is nobody other than our honourable Prime Minister Jononetree Sheikh Hasina, the legacy of the Father of the Nation & the most powerful architect of materialising Bangabandhu's thoughts. 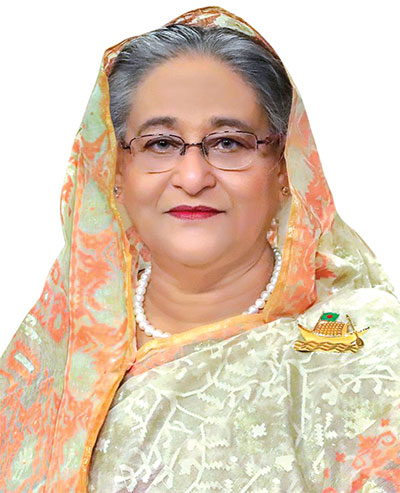 We are fortunate that our supreme and competent front-runner is accurately well-meaning the name of Sheikh Hasina. The term 'Hasina' does have the source from the Arabic root Husn, which gives us the idea of most piousness, excellent value and fantastic sense. The birthday of such a capable, talented and efficient daughter of Bangabandhu and Bangamata is on September 28 in 1947.

The heinous murderers unpredictably killed Bangabandhu and all family members, and the killers could also kill Jononetree Sheikh Hasina with the rest of the family at the saddest and the blackest night in the month of August 15, 1975. Jononetree Sheikh Hasina and her younger sister Sheikh Rehana had been in Belgium. Perhaps, God saved her that day to grab hold of the boat of the post-Bangabandhu Awami League. Perhaps, God chose her to be the benevolent future superstar in the political sky of Bangladesh. The Almighty Allah saved her life to serving the Bengali Nation.

The military junta's misrule has long thrashed Bangladesh after the assassination of the nation's Father in 1975. Bangladesh has lagged behind miles. The rise of political corruption eroded the fundamental rights of the general people in Bangladesh. Poverty rose to a tremendous height. Bangabandhu's dream has been choked and suffocated. But dreams cannot die. So, the objective of ‘Sonar Bangla’ lived along. Bangabandhu's daughter Sheikh Hasina has carefully nurtured Bangabandhu's vision in the core of her heart. To materialise that dream, she ignored the bloody glare of the military regime and returned to her homeland and took the responsibility of the Awami League. She took the driving seat of the Awami League and created a vast mass movement, and dragged the dictator down from power. Following Bangabandhu's instructions, Sheikh Hasina also desired the actual liberty of the people of Bangladesh—from hunger, poverty, injustice and oppression. As a result, people gave the decisive mandate to her leadership in the elections of 1996. In response, Jononetree Sheikh Hasina has proven her capacities to develop a sickly land by the magical enhancement of growth.

On April 2, 2004, the BNP-Jamaat killer circle opened fire targeting Sheikh Hasina's car convoy at Gaurnadi, Barishal. Similarly, the BNP-Jamaat alliance unleashed the blackest attack on August 21, 2004 in front of the Awami League central office at Bangabandhu Avenue in the capital. The Dhaka Mahanagar Awami League held a rally in front of the party's central office that afternoon to protest the bombing by extremists over the land and the Gopalganj's police cruelty. Jononetree, as the Chief Guest, reached the scene at 5:00 p.m. and declared the beginning of the protest rally. Soon after the end of her twenty-minute speech on the stage of the truck van, she started getting down from the scene. Right that moment, a group of militant sponsored by the BNP-Jamaat administration began a grenade attack on the platform. In a minute and a half, 11 powerful grenades exploded. Twelve persons died on the spot, and twelve others expired in hospitals. More than four hundred people, including our Jononetree, were injured many of them have still been suffering.

Our only hope is the honourable Prime Minister. Coming to state power for four tenures, including the 1996 elections, the stability and equilibrium she has ensured in politics and public life through numerous programs and projects are unique in the world. Her comparison is nowhere and does not have any parallel. In the current socio-economic and political context of Bangladesh, there is no alternative of Sheikh Hasina as a leader of the state. We should understand from our individualistic positions that our sacred duty is to keep her well, healthy, and safe.

On the bright occasion of the birth anniversary of the beloved leader, we pray for her long life with sound health. Honourable Prime Minister, may you remain like a canopy of blessings over our heads. I wish you every happiness and success. Long Live Jononetree Sheikh Hasina!

Happy Birthday, Deshratna, the leader of the mass people.

The writer is a Professor of English, and

Together We Stand Strong

Sheikh Russel and His Radiant Smiles