May the Wonder Woman Live Long!

Sheikh Hasina is not just a name, she is the epitome of women’s empowerment. The Prime Minister of Bangladesh is, by far, the longest-serving PM in the history of Bangladesh. She has been serving the nation as a PM for a combined period of 17 years now though her political career has compassed more than four decades. She is the eldest among five children of the Father of the Nation Bangabandhu Sheikh Mujibur Rahman who was brutally assassinated along with her family members on 15 August 1975. Fortunately, Sheikh Hasina and Sheikh Rehena got saved due to their foreign stay at that time. Otherwise, the country would not have witnessed the emergence of a great leader, the flight of the Pheonix—the making of Sheikh Hasina!

Sheikh Hasina was born on 28 September in 1947 in Tungipara. That is to say, she turns 75 this year. After the barbarous and remorseless incident of Bangabandhu’s execution, she lived in exile in India as she was not allowed to land in her own home ground. It makes me shiver every time when I think of her toiled journey of unaspiring displacement. She returned home after six long years and got elected as the President of Bangladesh Awami League in 1981. From then on, she has been in a mission of serving the country to the best of her abilities. Whatever she has done to the development of the nation is commendable and incomparable.

Sheikh Hasina took charge, for the first time, as the Prime Minister in 1996. Among many other acknowledgeable things, she attempted to repeal the Indemnity Act that was formulated to give immunity to the people involved in Bangabandhu’s assassination. She was merciless towards the war criminals also. After ages, the country witnessed the long-desired punishments of the war criminals. Thanks to Sheikh Hasina! 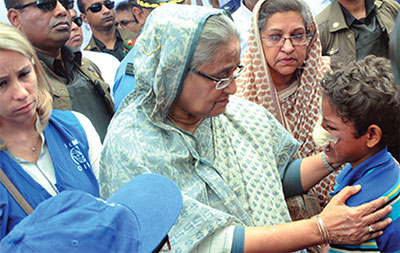 The second premiership of Sheikh Hasina began in 2009 with a view to making Bangladesh a digital country. She started materializing what Bangabandhu always dreamt of while building a nation called Sonar Bangla or Golden Bangla where peace, democracy, religious freedom, fundamental human rights and women’s empowerment are to be restored. These principles are meant to shape and reconstruct our collective thought process as a nation.

Sheikh Hasina’s third premiership adds more productive, constructive and positive values to her leadership. It goes without saying that she has been relentlessly working for the betterment of the country for which Bangladesh is now officially called a developing country. I should not just sound vague and biased. I will definitely come up with the figures and incidents which are solid, objective and undeniably appreciative.

Any country can progress when the economic sector progresses. The current GDP of Bangladesh hits the rate of 8.13 percent which was 7.6 percent in the previous year. The country is very close to the middle-income threshold. After the second premiership of Sheikh Hasina, in just 10 years, Bangladesh hits the highest GDP growth in the world. Very soon, we will reach the second digit GDP percentage.

The GDP rates do not go high on its own. There are a few major factors that work efficiently behind it. GDP is a mathematical figure that we can see. What we cannot really see and realise is the increasing number of empowered women in different job sectors of the country who earn, pay taxes and contribute to the enhancement of the GDP growth rate. PM Sheikh Hasina has ensured equal and equitable participation of both men and women in both government and private job sectors. Even the gender pay gap is the lowest in Bangladesh. It is only 2.2 percent whereas the average gender pay gap in the world is now 21.2 percent. As a working woman, I cannot be prouder to see this!

In fact, women’s education is one of the most vital agendas of Sheikh Hasina’s government. Nowadays, parents of female children also send their daughters to schools because now we have more reliable and empowering examples of women’s empowerment in front of us. To mention the least, the Prime Minister of the country is a female. The Education minister of Bangladesh is a female. 60 percent of the primary school teachers are females. When the job opportunities are created for women, parents of daughters also start sending them to seek education which is made compulsory. Not just in politics, women are holding higher positions in other sectors too.

Sheikh Hasina’s government has taken a zero-tolerance policy against terrorism and violent extremism, especially gender-based violence. Women in Bangladesh were married off at a very early age. Hasina took initiative and make the girls receive education first and make their own identities. Ours has been a conservative country where many illiterate people did not want to send their daughters to school, but looked for lady doctors to treat their wives and daughters. Hasina dismantled this paradoxical idea of the people by showing them the path of enlightenment. She expanded the private sectors and offered more job opportunities to both men and women. We have more private television channels now which telecast many programs regarding social awareness against gender discrimination. It has helped many families to realise that their little girls can conform to the tradition and at the same time become doctors or educators.

During the pandemic, it was Sheikh Hasina’s digital policy which helped many enthusiastic learners to carry on with their education. All the schools, colleges and universities were closed, but the digital learning went on. Knowledge is now accessible to all at any corner of the country. Whoever is in a possession of a smartphone and an internet connection can join online classes, seminars, conference and workshops anywhere in the country. Sometimes the network is poor and the internet connection is interrupted. However, the learning process never gets stopped. It is a small country, but densely populated. The way Sheikh Hasina manages her sea-size population in a pond-size land is beyond our ordinary imagination.

Sheikh Hasina’s biggest goal “Digital Bangladesh” is on the right track. This government needs to sustain and serve for longer period. Otherwise, as history proves, the development works will get stopped somewhere and cause a massive backlash in every sector. To reach our destiny, which big, vast and visionary, we pray for the longer and healthier life of the honorable Prime Minister Sheikh Hasina. Dear wonder-woman, may you live longer, stronger and healthier!