The importance of the Sheikh family in the politics of Bangladesh is immense. Like her father, who was the coxswain of the liberation war, Sheikh Hasina returned from abroad and took charge of the fragile Awami League on May 17 1981, when the post-1975 military rulers were desperately trying to wipe out the party from the political history of Bangladesh through oppression and fragmentation.

Her first task was to organise the fragile Awami League and establish democracy through a movement against the dictator and bring the party to power. When the movement against the dictator Ershad started under her leadership, Ershad was compelled to resign, and democracy was restored in the country. She took over the responsibility of the Prime Minister after winning the 1996 election. The country witnessed incredible growth in different sectors during 1996-2000 though the pace of development was almost stagnant from 2001 to 2006.

Since her government returning to power in 2008, the country has been moving forward to reach the pinnacle of development. Since this majestic woman was born on September 28, 1947, the day is very important in our national life. Today, on her happy birthday, I would not only wish her a happy birthday but would also like to thank her for leading this remarkable development of Bangladesh.

During the last 12 years in power, she has taken Bangladesh to the top of development in various sectors. We have been recommended from underdeveloped countries to the developing countries under her leadership. If the growth continues at such a pace, Bangladesh will be transformed into a developed country by 2041. 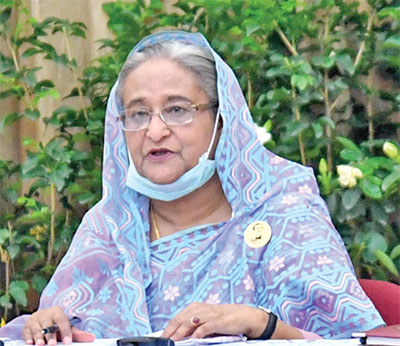 In the last 12 years, we have witnessed the implementation of mega projects like the Padma Bridge, the Dhaka Metrorail and the tunnel under the Karnafuli River that were unimaginable even a decade ago. Bangladesh has grown as an Asian Tiger in the world due to her credible leadership.

The leadership qualities of a country play an important role in development. We already know that Bangladesh has made the most progress in the world in the Sustainable Development Goals Index during 2015-2020. The United Nations Sustainable Development Solutions Network (UNSDSN) has awarded the SDG Progress Award to the Prime Minister during the 76th General Assembly of the United Nations, for which we feel proud. This has happened due to her visionary leadership.

Apart from economic and social development, Bangladesh's success against the Covid-19 pandemic, which has been going on for more than a year and a half, is an unprecedented event globally. When many rich countries have been embroiled in a war against the corona pandemic, Bangladesh has successfully dealt with the dismays of Covid-19. The number of deaths and infected patients in our country is much less than in other countries. This has also been possible for the Hon'ble Prime Minister's trustworthy leadership because she has made the right decision at the right time.

Along with development, she has always tried to establish good governance by keeping the country free from corruption. Her zero-tolerance policy against corruption has been praised in many cases. Though this process started many times, it got disrupted due to various reasons. I firmly believe that she must be aware of those issues. If zero-tolerance against corruption continues, Bangladesh will soon gain a reputation as a corruption-free country.

She has taken various initiatives to establish good governance, which are relevant and commendable. Development can only be sustainable if good governance is established by ensuring administrative accountability, transparency, and inclusion of the people in the governance system, which is universally recognised. Today, on the Prime Minister's birthday, we thank her for accelerating the pace of development of Bangladesh and advancing the establishment of good governance. I wish her good health and long life today. We all look at you, honourable Prime Minister. After Bangabandhu, you are the ultimate destination of the people of Bangladesh, and therefore, you have to stay healthy for the people and the country.

The author is a Professor, Department of Public Administration, Rajshahi University