The pro-independence party Awami League has so far managed to rule the country for only twenty years out of fifty years since the independence of the country. But all the progress the country has made came within this period. Father of the Nation Bangabandhu Sheikh Mujibur Rahman had kick-started the development progress during his rule from 1971 to 1975, while his daughter Sheikh Hasina has turned his unfinished dream into reality by turning Bangladesh into a developed and prosperous country. During Sheikh Hasina’s premiership, from 1996 to 2001 and then from 2009 to present, the country witnessed massive development activities. But it was the Greatest Bengali of all time Bangabandhu Sheikh Mujibur Rahman who had sowed the seeds of our progress.

From 15 August 1975 to 1996 there was no significant progress in the agriculture sector; instead the vital sector was left behind. But when Bangabandhu’s daughter Sheikh Hasina assumed state power for the first time in 1996, she re-initiated the unfinished works of Bangabandhu. Thus she made Bangladesh self-sufficient in food production within five years, taking one of the first and foremost basic human rights to the doorstep of the people. When Bangabandhu's daughter came to power in 1996, there was a food shortage of 2.4 million metric tonnes, but when she left power five years later there was a surplus food of 2.8 million metric tonnes. This means she was able to make Bangladesh self-sufficient in food. But it didn’t take long for the country to revert back to food deficiency and food import during 2001 to 2008. 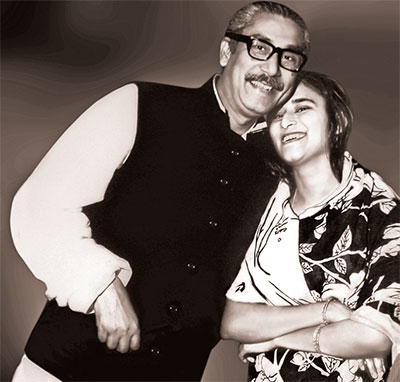 In the last 12 years, from 2009 to 2021, the agricultural sector of the country has made great strides under the able leadership of Bangabandhu’s daughter. Now Bangladesh ranks third in the world in vegetable production, sixth in potato production, fourth in rice production, third in freshwater fish production, first in hilsa production, second in jute production but first in export, ninth in tea production, second in cattle and goat production, and eighth in mango and guava production. The country was lagging far behind in these global indices during the tenure of BNP-Jamaat and Caretaker government from 2001 to 2008. The Department of Agricultural Extension is implementing an agricultural mechanization project worth Tk 3,020 crore in FY 2021-22 to increase food production. In the fiscal year 2021-22, the amount of subsidy in the agricultural sector is Tk 9,500 crore which may increase by another Tk 500 crore by the end of the year. Today the government has brought down the price of fertilizer to Tk. 12 from Tk. 90 during the BNP government. Delivering rice at Tk. 10 per kg was a landmark step of Bangabandhu’s daughter.

The Father of the Nation had given equal importance to the education and health sectors. We get an idea of Bangabandhu’s education policy from his radio-television speech to the people on the occasion of the general election of 1970. In that speech he said that there can be no better investment than investing in the education sector to build a healthy society. Illiteracy must be eliminated. Four per cent of the total GDP will be allocated for education. After independence, he formed the National Education Commission. He nationalised schools and colleges, and formed Bangladesh University Grants Commission to facilitate higher education. Overall he emphasised on formulating a modern and science-oriented education policy in Bangladesh. In this regard he had formed the country’s first National Education Commission and appointed renowned scholar Dr. Kudrat-e-Khuda as the chairman of the commission on July 26, 1972. He had given autonomy to four universities of the country under the 1973 Education Act. However, he kept BUET and Bangladesh Agriculture University out of the purview of 73 Act in order to motivate the teachers of these institutions to conduct research.

He nationalized all primary schools and increased salaries of primary teachers. He instructed TCB to import medicines and at the same time asked domestic drug companies to manufacture those medicines. These sectors too suffered huge losses during the period of August 15, 1975 to 1996. But after assuming power in 1996, Sheikh Hasina prioritized the education sector like the Father of the Nation. She established 12 science and technology universities, introduced creative education systems, freed competitive exams from copying and cheating, incorporated technology into education, and expanded technical education. At present the literacy rate in the country is 74.6 percent, which was only 5 percent during the tenure of BNP-Jamaat in 2005. Now the number of public universities in Bangladesh is around 50. Moreover, Bangabandhu’s daughter has a plan to establish a university in every district. Several specialized universities have already been set up. Private universities have achieved unprecedented success. Bangabandhu Sheikh Mujibur Rahman Digital University has been set up to educate the youth of this country in technology and make them fit to lead the fourth industrial revolution.

During Bangabandhu’s tenure, in order to accelerate the development of power and water two separate bodies were created namely BPDB and WBD by breaking up WAPDA. At that time there was no electricity in 85 percent of the area. The country’s electricity production capacity was merely 548 megawatts. He then nationalized the country's five largest gas fields - Titas, Bakhrabad, Rashidpur, Kailashtila and Habiganj - to ensure energy security. He bought the Bangladesh chapter of Shell International, the world's most influential multinational oil company, at a nominal price. In just three and a half years, Bangabandhu raised power production capacity from 548 megawatts to 766 megawatts.

After 1975 when anti-liberation forces grabbed state power, the power and energy sector was neglected. When Sheikh Hasina's government came to power in 1996, the country’s power generation capacity was only 1800 megawatts. Bangabandhu had raised electricity production to 766 megawatts in just a couple of years, but anti liberation forces increased the capacity only by 1034 megawatts in 21 years In 2001 when the Hasina government left power, the country’s electricity generation capacity was 4300 megawatts. But as a result of looting and misrule during the BNP-Jamaat coalition government, the energy sector floundered once again. Since Bangabandhu’s daughter Sheikh Hasina ascended to power in 2009, the country has been once again moving towards realising Bangabandhu’s dream of ensuring power and energy security. Bangladesh now has a power generation capacity of 20,293 megawatts. Massive plans are afoot to raise the capacity to 40,000 megawatts by 2030 and 60,000 megawatts by 2041.

The Father of the Nation focused on making full use of the potential of the Third Industrial Revolution through the best use of information and communication technology in this newly independent country. That is why he took initiative to make Bangladesh a member of telecommunication at the earliest possible time. On 14 June 1975, a satellite-ground station was set up at Betbunia in the remote area of Rangamati. Bangladesh became a member of ITU in 1973 thanks to the efforts of the Father of the Nation. But, the sector has seen no development at all from 15 August 1975 to 1996. In 1994 Bangladesh was offered to get connected with the International Internet Gateway (IIG) at free of cost. But, the then ignorant BNP government didn't accept the offer on the excuse of 'leaking out' of the country's secret information. Then when Bangabandhu’s daughter came to power she took concrete measures to materialise the idea of digital Bangladesh during her first stint in power from 1996-2001. She approved setting up of the submarine cable and lifted tax from computers and mobile phones. Later, during the BNP-Jamaat coalition government, looting again caused damage to the sector. The steps taken by Bangabandhu's daughter were canceled. As a result, Bangladesh lagged behind in technology again.

In the election manifesto of Bangladesh Awami League on 12 December 2008, Hon'ble Prime Minister Sheikh Hasina promised to build digital Bangladesh by 2021, achieve peace, democracy, development and prosperity by 2014 and make Bangladesh a developed and prosperous country by 2018. Her worthy son and ICT Adviser Sajeeb Wazed Joy has been relentlessly assisting her in establishing Digital Bangladesh. In just 12 years, Bangladesh has become a wonder of the world, a role model for development.

When Bangabandhu took charge of this country on 12 January 1972, the reserves in the Central Bank were zero. Even after all this, in such a short period of time, he had increased the size of his second budget to Tk 1084.37 crore from his first budget of Tk 786 crore. At that time the GDP of Bangladesh was only 08 billion dollar which Bangabanbdhu managed to increase to 20 billion dollar within just three and half years.

The rapid progress of Bangladesh in such a short time has increased the number of enemies both at home and abroad. Domestic and international conspiracies were hatched against him and a kind of instability was created inside the country. He then declared a second revolution on January 25, 1975. In his second revolution, he wanted to build a corruption-free society, increase agricultural and industrial production, control population growth, achieve national unity, and establish a people-oriented system of governance. He created the Director of Family Planning in 1973 to control population growth.

Prime Minister Sheikh Hasina leads from the front during any time of crisis. We have witnessed during this time of pandemic that thanks to her relentless efforts the pandemic situation is much better in Bangladesh than many other developed countries. She has been struggling hard to save the lives and livelihood from the onslaught of the pandemic. In addition to regular office work, she has been directly supervising the process of providing food and financial assistance to the affected people. She has played a strong role in protecting the people of the world from the scourge of the deadly virus.

She held multiple video conferencing with world leaders and heads of neighbouring countries, where she called for working together to tackle the global crisis. In a word, Sheikh Hasina is second to none in establishing peace and rule of law in the world. We have never seen a humanitarian leader like her in the world. The people of Bangladesh want to stay under the guidance of this great humanitarian leader for ages.

The writer is the Vice-chancellor of Bangabandhu Sheikh Mujibur Rahman Digital University, Bangladesh.