Father of the Nation Bangabandhu Sheikh Mujibur Rahman, once released from Pakistani prison, returned to his motherland on 10 January 1972. Blood stains had not yet been washed away from the soil of Bengal. The cries of people who had lost their beloved ones were still floating in the air. Destroyed houses, roads were all around. There was no money in the state treasury. Strengthening all the pain in his heart, standing on the soil of Bengal that was soaked with the blood of millions of martyrs, that self-confident and far-sighted great leader, inspired by the uncompromising vows of patriotism, set out to build the country. He completed the task of framing the country’s constitution in the quickest time. Simultaneously, the foreign policy of Bangladesh was drawn up. The foreign policy described in paras 1 and 2 of Article-25 of the constitution says about Bangladesh's relationship with other countries, peaceful resolution of international disputes, respect for the UN Charter, relations with Muslim countries, etc. All the diplomatic efforts of today's Bangladesh in the world are based on the basic elements of Bangabandhu's foreign policy- 'friendship to all, malice towards none' and 'friendly coexistence'.

In order to safeguard the national interest in the international arena, a state has to devise strategies related to its own interests. And the most important role in this work is played by the leading party and the leadership of the country. James N Rojno, an American political scientist, writes, “A leader’s beliefs about the nature of international arena and the goals that ought to be pursued therein, his or her peculiar intellectual strength and weakness for analysing information and making decisions, his or her past background and the extent of its relevance to the requirements of the role, his or her emotional needs and most of other personality traits- these are but a few of the idiosyncratic factors that can influence the planning and execution of foreign policy.” It is clearly said how important the role of a leader is in determining the position of a state in the world society. 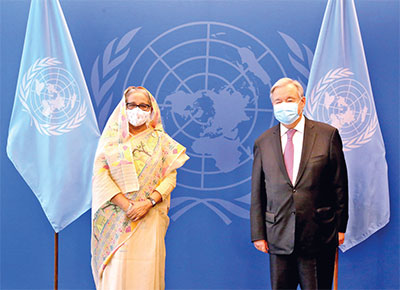 At the core of today's level of excellence in Bangladesh's foreign policy is the leadership of Honorable Prime Minister Sheikh Hasina, her diplomatic experience, her personal relationship with world leaders, her strong role in various world issues and her foresight on global issues. Not only as the daughter of the Father of the Nation, but also as a patriotic and dependable leader of the common people of this country, she has added a new dimension and scope to the implementation of Bangladesh's foreign policy, making it more powerful, sustained, expanded and substantive. Her diplomatic charisma has brought Bangladesh to a respectable position socially, economically and politically. Bangladesh is now known to the world community as a ‘role model’ of development.

Not only in the multilateral sector, but also in the bilateral and regional or sub-regional spheres, Sheikh Hasina's perseverance, ability to negotiate and understanding have worked behind the height of today's position and image of Bangladesh. She has strengthened relations with other countries by emphasizing mutual respect, trust and brotherhood or friendship. And at the root of it was friendship to all, malice towards none, as she preserves her strong belief and confidence in this basic principle of foreign policy. It would be a long list to give an account of Bangladesh's achievements in the international arena under the leadership of Sheikh Hasina. After Bangabandhu, no other leader except Sheikh Hasina has been able to bring such a significant achievement for Bangladesh in multilateral, regional and bilateral fields.

Her political, social and economic endeavours for the development of Bangladesh have also been deeply appreciated by the world leaders. Undoubtedly, her success is due to her proper understanding, analysis and follow-up of international politics, diplomatic weather and appropriate implementation of Bangladesh's foreign policy tactics. In addition, her wisdom and diplomatic analytical ability have played a unique role to bring such success of our foreign policy. She has received many awards, titles and degrees. At the on-going UN General Assembly, Sheikh Hasina has been awarded the 'UN SDG Progress' award for her outstanding contribution to socio-economic development.

We believe that her patriotism, humanitarian quality, relentless efforts and courage will one day establish the hunger and poverty- free golden Bengal as dreamt by Bangabandhu. Sheikh Hasina is the only leader who can place Bangladesh at that unique position. We wish Sheikh Hasina good health and long life.