Prime Minister Sheikh Hasina’s contribution to ensure rights of the people, constitutional rule and the restoration of democracy in a state is unforgettable. After Bangladesh achieved independence, US Secretary of State Henry Kissinger called the country a “bottomless basket”. Today, the country of that 'bottomless basket' has written its name in the list of middle-income countries. Has set foot on the highway of development, and it also has reached infinite horizonless space.

All the achievements have been made possible as a result of the strong leadership and well thought out thinking of the people’s leader Sheikh Hasina. She formed the government in 2009 with the dream of building Bangladesh as a 'digital Bangladesh' by 2021. The digital Bangladesh of her dream has become a reality today. Today, Bangladesh is part of the world's fastest growing digital economy. Even in terms of trade, Bangladesh is considered as the 'Emerging Tiger' of Asia.

After the formation of the AL government in 2009, Prime Minister Sheikh Hasina’s focus was on Digital Bangladesh, protection of farmers, curbing terrorism and militancy, and bringing economic dynamism with radical changes in communication and infrastructure. As a result of which, under the strong leadership of Prime Minister Sheikh Hasina, various bold action plans are being made a reality today.

One of the achievements of the grand alliance government led by Bangladesh Awami League is the construction of Padma Multipurpose Bridge. This is the biggest milestone in the development of Bangladesh under the leadership of Sheikh Hasina. Ignoring the bloody eyes of the World Bank, by building the Padma Bridge with her own determination, Jananetri has shown the strength of leadership and the ability of Bangladesh. Even the most cunning and domestic enemies have been compelled to appreciate this great works. Now, the construction of the Padma Bridge is nearing completion.

It is expected to be inaugurated next year. However, the construction of this bridge was not easy. The World Bank put pressure on Sheikh Hasina and Bangladesh by canceling the Padma Bridge project on false allegations. Bangabandhu’s daughter is not a man to be broken. She had decided to build the Padma Bridge on his own initiative. However, the allegation was later proved false in a Canadian court. If the Padma Bridge is launched, all the doors of development including the economy of South Bengal will be opened and the foundation of the economy of Bangladesh will be strengthened. All the socio-economic and infrastructural activities of South Bengal are now revolving around this dream bridge.

Another example of courage of the leadership of the  Prime Minister is the conquest of the sea. It will forever be a milestone in the history of Bangladesh. Bilateral talks on demarcation of borders with neighbouring India and Myanmar began in 1974. After more than three decades of negotiations, the Bangladesh government decided to go to the International Court of Arbitration on October 8, 2009 as the maritime dispute with Myanmar and India had not been resolved. 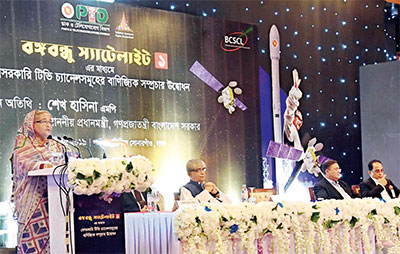 The sea area of Bangladesh was limited to only 130 nautical miles as India and Myanmar claimed maritime boundaries on the basis of equidistance. On March 14, 2012, Bangladesh got the final verdict in the presence of all parties (Bangladesh and Myanmar) in the court at the International Tribunal for the Law of the Sea (ITLOS) in Hamburg, Germany.

Sheikh Hasina is honored as a humanitarian leader across the world for sheltering the Rohingyas. That is why she is now known around the world as the 'Mother of Humanity'.

The humanitarian leader has shown her foresight in controlling the global Corona situation. Prime Minister Sheikh Hasina has shown remarkable success in controlling the corona and especially in tackling the potential economic crisis. Both infection and mortality rates are limited in the country. Where most of the countries in the world have not been vaccinated from the very beginning, about four million people have been vaccinated in our country. The Prime Minister has shown visionary leadership in vaccine diplomacy.

The mass vaccination program has also been taken to reach the vaccine to doorsteps of common people. As a result of her visionary leadership, the Prime Minister has been ranked among the top three inspiring women leaders of 54 Commonwealth countries.

On the occasion of Mujib Year, Sheikh Hasina has set a unique example by giving the permanent address to 6 lakh 82 thousand 33 landless and homeless families with free ownership of teen-shade homes at government expense.

Mujib's daughter Sheikh Hasina not only made history by gifting the houses to about 70,000 homeless people in a day on January 23, but also set a world record. Such humanitarian initiatives have been praised in the international arena.

Special mention should be made of the conquest of space. Reaching the space with this red and green flag with the slogan "Joy Bangla", Hasina has proved in time of need, why she is the best of the best in terms of prosperity.

This achievement of rewriting the name of Bangladesh in the international arena is surely an unforgettable event. As a result, the country today has reached the infinite horizonless space along the highway of development. With the strength of leadership, Bangladesh is on a golden edge of prosperity today.

Bangabandhu Satellite-1 with the successful launch of the first commercial satellite Bangabandhu-1 from the Kennedy Space Center in Florida, USA at midnight on May 12, 2018, the dream of 160 million people was fulfilled once again.

Besides, the mega project under the leadership of Hon'ble Prime Minister is on the verge of implementation which will reduce the traffic congestion problem in Dhaka city. Implementation of several mega projects including Elevated Expressway, Karnafuli Tunnel, Rooppur Nuclear Power Project, Maheshkhali-Matarbari Integrated Development Project and construction of 100 Special Economic Zones, more than two dozen high-tech parks and IT villages are in full swing.

In a joint function organised on the occasion of the birth centenary of Father of the Nation Bangabandhu Sheikh Mujibur Rahman and the golden jubilee of Bangladesh’s independence, world leaders lauded Prime Minister Sheikh Hasina. Heads of state and government of six SAARC countries, including Prime Minister Narendra Modi of neighboring India, took part in the event.

Heads of state and international organizations, including the United States, Russia, the United Kingdom, China, Canada, and the United Nations, sent video messages and greetings. In their speeches, the world leaders lavished praise on Prime Minister Sheikh Hasina for the development of Bangladesh.

Sheikh Hasina's prudence, efficiency and far-sightedness in running the state have led to development in all aspects and Bangladesh is moving forward on the path of a developed and prosperous country.

Recently, Prime Minister Sheikh Hasina received the UN Sustainable Development Solutions Network-SDSN Award. She was awarded the SDG Progress Award for leading Bangladesh on the right path to eradicate poverty, protect the world and ensure peace and prosperity for all.

Prime Minister Sheikh Hasina has been dubbed a 'crown jewel' by the Earth Institute, Columbia University, Global Masters of Development Practice and the UN Sustainable Development Solutions Network. This honour belongs to Bangladesh, this honour evokes pride. Dynamic, Magical Leadership In the hands of the beloved leader Sheikh Hasina, Bangladesh will continue to prosper in this way one after the other and the desired goal will be achieved by astonishing the world.

I  would like to end the article with an example. In ancient Greek and Roman mythology, each king would choose a 'champion' from their respective kingdoms each year, whose heroism and achievements would go down in history. Champions became popular. Similarly, the champion of the Republic of Bangladesh is Sheikh Hasina. Today, Bangladesh has won the title of 'Champions of the Earth', starting from the conquest of the sea, through the daughter of Bangabandhu, who held the birth of Bangladesh.

The writer is Deputy IT Secretary,