Rohingya Crisis and the UN

“Our painful experiences have emboldened us to continue to speak for the oppressed people.”

The Rohingya crisis, the most pressing global humanitarian tragedy, enters the fifth year since their massive influx took place in Bangladesh in the face of ‘genocidal killings’ and ‘ethnic cleansing’ in Myanmar in August 2017. Currently, the number of Rohingyas staying in Bangladesh in Cox’s Bazar and newly built facilities in Bhasan Char, Noakhali is more than 1.1 million, with a prospect of adding about 50,000 newborn babies every year. Both the current military regime led by the coup leader, Min Aung Hliang and the former political establishment led by Aung Saan Suu Kyi in Myanmar have unashamedly defied all multilateral and bilateral diplomatic initiatives for the repatriation of the Rohingyas. The tragedy continues every day as more uncertainty looms over their repatriation. The Prime Minister of Bangladesh, Sheikh Hasina, singularly shouldered the burden of the Rohingyas as they were fleeing an ‘ethnic cleansing’ and genocide in their own country where they have been living for centuries. Under the leadership of Sheikh Hasina, Bangladesh has not only sheltered the stateless and the most persecuted community in the world but also has waged a historic diplomatic battle to seek a permanent solution to the Rohingya crisis through the return to their homeland in safety, security and dignity.

The journey of Sheikh Hasina as the champion of the rights and dignity of the Rohingya people began with her role as the ‘Mother of Humanity’ when she uttered, “If we can feed 160 million, we can also feed 700,000 Rohingya people.” She pronounced it in the midst of seeing the hungry, distressed and hopeless Rohingyas from Myanmar who took shelter in Cox’s Bazar, Bangladesh, in early September 2017. She added, “We have let the Rohingya in on humanitarian grounds and I ask the people of this country to help ease their suffering in whatever way they can.” In the same month, in her Speech at the United Nations General Assembly (UNGA), she told, “I can feel their pain as I, along with my younger sister, had been a refugee for 6 years after my father, the Father of the Nation of Bangladesh Bangabandhu Sheikh Muiibur Rahman and almost all members of my family were assassinated in 1975.” Highlighting her personal and family experiences of atrocities and brutality, Sheikh Hasina floated a five-point proposal in the UNGA debate in 2017. With vision and invincible courage as a global leader of the oppressed people, Sheikh Hasina urged the international community to implement the five points as follows: 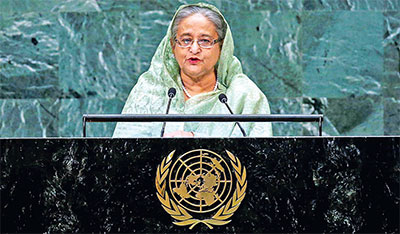 “First: Myanmar must unconditionally stop the violence and the practice of ethnic cleansing in the Rakhine State immediately and forever. Second: the Secretary General of the United Nations should immediately send a Fact-Finding Mission to Myanmar. Third: All civilians, irrespective of religion and ethnicity, must be protected in Myanmar. For that, "safe zones" could be created inside Myanmar under UN supervision. Fourth: Ensure sustainable return of all forcibly displaced Rohingyas in Bangladesh to their homes in Myanmar. Fifth: The recommendations of Kofi Annan Commission Report must be immediately implemented unconditionally and in its entirety.”

Bangladesh, under Sheikh Hasina’s leadership, rightly emphasized the pivotal role of the United Nations in resolving the crisis through creating a conducive environment for the return of the Rohingyas in Myanmar. The emphasis on global diplomacy in resolving the Rohingya crisis becomes the hallmark of Bangladesh’s relentless efforts to alleviate their sufferings. The five-point proposal immediately became the bedrock of the UN and global initiatives. It provided a roadmap to deal with the Rohingya crisis.

Sheikh Hasina continued to push the issue in every global and regional forums and bilateral talks. In her speech at the 73rd UN General Assembly, Sheikh Hasina reminded the world about resolving the Rohingya crisis. The Prime Minister Sheikh Hasina placed a four-point proposal at the 74th UN General Assembly to resolve the Rohingya crisis, which she says, is becoming a regional threat. Her speech at the 74th UNGA was a paradigm shift in perceiving the crisis as she focused on the regional dimension of the dismal consequences of the Rohingya crisis. Addressing the UNGA, she urged the international community to understand the gravity of the situation as the crisis is now going beyond the Rohingya camps. She asserted, “Despite our efforts to contain it, the crisis is now becoming a regional threat. Besides, increasing congestion and environmental degradation is challenging health and security in the area.” She said Bangladesh was bearing the burden of a crisis, which was of Myanmar’s creation. “It’s an issue solely between Myanmar and its people, the Rohingyas. They themselves have to resolve it.”

The four-point proposal placed by Sheikh Hasina at the 74th UNGA are: Myanmar must manifest clear political will supported by concrete actions for sustainable return and reintegration of Rohingyas to Myanmar; Myanmar must build trust among Rohingyas by discarding discriminatory laws and practices and allowing ‘‘go-and-see” visit to Northern Rakhine by Rohingya representatives; Myanmar must guarantee security and safety of the Rohingyas by deploying civilian monitors from international community in the Rakhine state; and the international community must ensure that the root causes of the Rohingya problem are addressed and the violation of human rights and atrocities committed against the Rohingyas are accounted for.

While speaking at the 75th UNGA Sheikh Hasina expressed her disappointment at the silence of the international community and non-cooperation of the Myanmar regime. She emphasized, “More than three years have elapsed. Regrettably, not a single Rohingya could be repatriated. The problem was created by Myanmar, and its solution must be found in Myanmar. I request the international community to play a more effective role in a solution to the crisis.”

So far, the UN has been playing an important role through its different organs though this global body has to go a long way to resolve the crisis. First, the issue dominated the debates of the UNGA during 2017-2021. There was re-introduction of the Country Specific Resolution at the 72nd session of the General Assembly under the Third Committee titled ‘Situation of human rights in Myanmar’ and its successive adoptions at 73rd (2018), 74th (2019), and 75th (2020) sessions of the General Assembly were significant developments on the General Assembly front. Second, in 2018, the Security Council undertook a visit to the Rohingya camps in Cox’s Bazaar and from there to Myanmar (29 April to 01 May). The Security Council held more than twenty meetings in different formats since August 2017. The council issued presidential statements, press statements time to time.

Third, the UN Secretary-General continues to maintain his strong position for the cause of Rohingyas and has been using his good offices role for resolution of the crisis. He visited the Rohingya camps in Cox’s Bazaar on 02 July 2018 along with the President of the World Bank Group and the UN High Commissioner for Refugees. Fourth, the UN Human Council has provided critical moral support since the beginning of the influx by terming the persecution of the Myanmar regime as a “textbook example of ethnic cleansing”. The UN Human Rights Council adopted a resolution on 12 July 2021 on the “Human Rights Situation of Rohingya Muslims and other Minorities in Myanmar” in its 47th session condemning human rights violations by Myanmar’s military against the Rohingya and other minorities, and called for a process of reconciliation. Fifth, the developments at the ICJ and the ICC are encouraging and are enormously significant in this regard.

Finally, the Prime Minister Sheikh Hasina had joined high-level side-events on the state of Rohingya in Myanmar in the United Nations. The Bangladesh Prime Minister Sheikh Hasina has been persistently seeking continued support of the OIC, the European Union (EU), the NAM and ASEAN to ensure safe, dignified, and sustainable return of the displaced Rohingyas back to Myanmar. Sheikh Hasina also focused on crucial role of global powers from the East to West. Bangladesh continuously highlights the role of the USA, EU and the Western countries, on the one hand, China, India, Russia, Japan and ASEAN nations on the other.

The leadership of Sheikh Hasina provides the biggest hope to the stateless Rohingyas. As the pioneer of humanitarian diplomacy in the contemporary world, Sheikh Hasina has been singularly and ceaselessly reaching every corner of the world and appealing to all global leaders for their support shunning their parochial geopolitical interests. Sheikh Hasina assertively says, “I ask the international community to put pressure on the Myanmar government to take back their nationals.” Bangladesh continues to provide, to the best of its abilities, the Rohingyas with basic humanitarian needs and much needed protection with the help of the international community. The world must join Bangladesh Prime Minister Sheikh Hasina to make humanitarian diplomacy a real success.

The writer is a Professor, Dept. of