Bangladesh U-19 team clinched the ongoing five-match youth ODI series after beating their Afghan counterparts by 121 runs in the third match at the Sylhet International Cricket Stadium in Sylhet on Tuesday.

Middle-order batsman Aich Mollah struck his maiden hundred to guide Bangladesh to 222-6 in their stipulated overs before left-arm spinner Naimur Rahman claimed 5-17 to help the hosts bowling out the visitors for 101 runs in 39.4 overs to complete a big win.

The win also ensured the hosts taking an unassailable 3-0 lead in the series as they won the first two matches by 16 runs and three wickets respectively.

The junior Tigers were reduced to 6-2 in the fifth over after they elected to bat first but Aich put up two crucial stands of 61 and 53 runs with Mofijul Islam (27) and skipper Meherob Hasan (seven) respectively to take the hosts' score over 100-run mark. 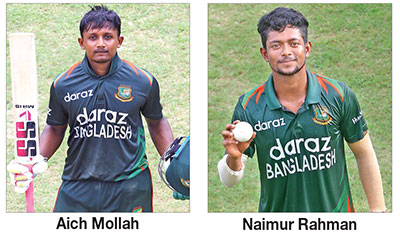 Aich also received good support from the lower middle-order batsmen as he completed his hundred and struck 108 off 130 balls with eight fours and four sixes before getting dismissed in the penultimate over.

Abdullah Al Mamun also made an unbeaten 32 off 20 balls with one four and three sixes while Tahjibul Islam scored 18 runs as Bangladesh posted the highest team total in the series.

“I’m really feeling well. We got a chance to play a series after a long wait and I made a hundred in today’s game. All of our coaches and management team are working hard to build up this team,” Aich said after the match.

“We will try our 100 percent to continue our winning streak till the next world cup,” he added.

In reply, the visitors were 3-87 at one stage but they lost their remaining seven wickets for just 14 runs after Naimur finished with his maiden five-wicket haul while Ripon Mondol and Ariful Islam claimed three and two wickets respectively for the hosts.

The fourth match will take place at the same venue on Friday.