Life amidst Crisis in Darfur

Darfur is a region of the western Sudan. It has borders with Libya, Chad, and Central African Republic. Ancient settlement or civilisation cannot be traced in this region maybe due to its arid topography. By 12th century, the Daju people created the first historical attestable kingdom here. The Sultanate of Darfur state existed from 1603 to 1874. It was incorporated into Sudan by Anglo-Egyptian forces in 1916. The eastern and southern part of Darfur is covered with plains and low hills of sandy soils. The north region is part of Sahara Desert. Western side is dominated by the rock and sandy soil. A few water features can be traced in central region around Marrah Mountains. Scarcity of productive land and reliable water are big challenges for the inhabitants here. This underdevelopment region is ravaged by a civil war erupted in 2003, leaving many people dead and displaced. Arabic is spoken as a lingua. It is also the official language of the country.

I passed one year in this region because of my assignment with United Nations (UN). The peacekeeping mission African Union-United Nations Hybrid Operation in Darfur (UNAMID) started functioning from 31 July 2007. Its Headquarter is in El Fasher. My duty station was south Darfur. Nyala is the capital of state of South Darfur. For entry or exit, I used air means of communication every time. Nyala Airport is a small airport and only domestic flights operate from here. Flight from Nyala to Khartoum, the capital of Sudan, takes around one and a half hours. The only road connecting airport to city centre passed through sands of desert. A few isolated rocky hills can be seen at distance. Surrounding soil supports some seasonal grass and low thorny shrubs.

The word ‘Nyala’ originated from a Daju word that means the place of chatting. Archaeological remains, engravings, and pottery of Daju Empire era were found here. Nyala city is crowded but not so developed. Traditional important agricultural industries include food processing, tanning, pottery making, shoe making, oil extraction and honey harvesting. The only industrial tannery in Darfur is also located here. The handmade leather footwear is renowned for quality and comfort. The escalation of different products price during the month of Ramadan is unimaginable here. Various household items, basic commodities, vegetables and processed meats are available in this market. I noticed speciality in Camel slaughtering. Firstly the animal was immobilised by cutting the hind leg at the Achilles tendon. Then its throat is cut. Subsequently, flying, evisceration and dressing were undertaken. Ground water management is a big challenge in this region due to droughts. Carjacking and abduction of foreign nationals also happens here. The main road connected Nyala with El-Fashir and then ran eastwards. Again, the rail line ran north eastwards from Nyala and connected the capital. The roads and the railway were both important logistical supply lines for Darfur. Grand Mosque of Nyala is the main mosque in this city. During 2010 I heard a small Tablighi Preachers team from Bangladesh visited that mosque. 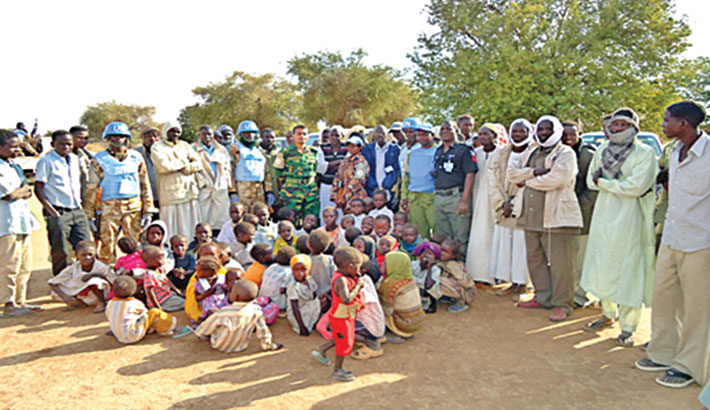 An UNAMID patrol with locals of Darfur.

The customs of greeting upon two men meeting each other is to lift up right hand and loudly announcing “Salam”. Then they shake hands and tap each other’s shoulder at the same time. Normally their day begins with a cup of tea. Usually they have two main meals. Breakfast is eaten in late morning as Brunch. Locally it is known as Fatur. It generally consists of beans, salad and meat items. These are eaten using flat bread or a stiff millet porridge known as asida or kisra. They take dinner at early evening. Traditionally meals are served in a large communal tray and eaten in groups. Aseeda is a high-energy food eaten at most meals and is often combined with a stew or curry containing okra. Jebena, the strong Sudanese coffee, is served from a special tin ‘jug’ with a long spout. The coffee is often spiced with ginger or cinnamon. A traditional garb for men in Sudan is the “jalabiya”, which is a loose-fitting, long-sleeved and white coloured dress. Customarily married women beautify their hands and feet with henna. This natural dye is prepared from leaves of a special plant and finally gives a dark red look.

Maximum time of my tenure I spent in Marla area. Every day we used to patrol the neighbouring villages. Local village administration is headed by Sheikh. Above the sheikh is the Umda, who controls the settlements over a larger area. Here sufferings of people were multidimensional. Scarcity of food, water and medicine are very common in this desert region. Many did not have protected shelters. Rebels attacking villages create fear and terror among the common people. They are living in critical humanitarian conditions. Health conditions in the villages are worse. Educational and welfare facilities are totally disrupted. Many children do not attend school so that they can work and add to their family’s income. Women and girls are fully responsible for all domestic-related chores, including collecting water and firewood, in addition to washing clothes, household shopping, food preparation, farming and grinding grains. For goods transportation, carts drawn by horse or donkey are very popular. Locals are very hospitable and humble. Children travel a long distance with animals for collecting water from water source or well every day.

Darfur is home to some 80 tribes, including nomads. Conflicts generally arise from disputes over access to natural resources, controlling lands, ownership of water points and grazing issues of livestock. Tribal disputes and ethnic tensions between nomadic Arabs and local tribes began erupting into armed conflict in the late 1980s. The violence, although bloody, generally was sporadic. In February 2003, the Sudan Liberation Army (SLA) and the Justice and Equality Movement (JEM) rebel groups were formed by members of the Fur, Zaghawa, and Masalit to demand reparation of the marginalisation of Darfur and denounce the government's failure to protect the indigenous population from Arab nomad raiders. They attacked government installations as protest. Gaining control of naturally found precious items like gold, diamonds, copper and uranium also added fuel to tension. Gold exports have become Sudan’s lifeline as it shares more than 60 per cent of total exports. Besides, huge amount of gold output is smuggled abroad. Rebel group SLA could establish foothold in this area initially. The government responded militarily and it resulted in death of huge locals. Others flee to neighbouring countries or became Internally Displaced (IDP). Various IDP cams were established in Darfur. Several times, we pass by the biggest IDP camp in the region located in Kalma area. Here most shelters are made of twigs and plastic sheets. Keeping warm in chilly desert night is also very challenging. Hundreds of thousands of internally displaced people are living in extremely difficult conditions in these camps. Some became IDP since 2003. UN and several NGOs are providing food, shelter and medical facilities in these camps.

Haboob, locally known sand storm, is a natural weather phenomenon which occurs annually between March and July. June to September is normally rainy season here. Wadi or dry river bed contains water only during this time. Here mainly sorghum, millet, sesame, peanuts, Eggplants and watermelon are grown. Really the surrounding terrain becomes rich savannah, with lush pasture. This season is comparatively short but seeing the countryside so fertile and productive helped me understand the importance of the land to locals and why land and water have been the cause of so many disputes over the years. Movement of vehicles over desert sand in either summer or winter is very challenging.

Several times I travelled to El Fasher which is administrative centre of North Darfur state. The Airport is situated around 5 km away from the city centre. Domestic and a few international flights operate from here. It is a busy urban centre. Livestock are central to life and an economy of sheep and camel trading dominates the local markets. Sheep price generally is increased before Eid-ul-Azha.

I was lucky to attend a marriage ceremony here. Arranged marriages are common in Sudan. The groom's family offers dowry or meher to the bride's family, which was traditionally cows, but has recently been in the form of money. For at least a month before the wedding, a Sudanese bride scrubbed daily with concoctions of turmeric, coffee, crushed almonds, rice and sandalwood as preparation. Her hands and feet are adorned in intricate designs of henna. Groom traditionally wears a white jellabiya on weeding day. Singing and dancing is also part of the marriage. The invited guests are served with traditional tasty and delicious foods. The Sudanese wedding ends with dancing which is mainly a series of shoulder bouncing and shimmying moves. Though ongoing crisis have ripped their social fabric, strong family bonds have kept people together.

El Geneina is the provincial capital of West Darfur province. El-Genena is also known for its sand dunes and its animal wealth. The ongoing war compelled many to flee away to eastern Chad and became refugee. Sudan’s tallest peak is located at Jebel Marra in central Darfur.

The multi-layered conflict of Darfur has done colossal damage to Sudan's image. Every Darfurian seems determined to re-establish peace. The region has abundant natural resources. It also has unique natural beauty, lifestyle, rich culture and heritage to entice visitors. At the beginning of the year 2011, my eventful journey while carrying out my duties came to an end. I got unique opportunity to learn many things by exchanging views with people of various countries. Despite the Darfurians terrible history of past and present, I am optimistic about their peaceful future.

The writer is a civil engineer and military officer