Covid-19: A Natural Disaster or a Man-Made Calamity

It has been more than one and a half years since SARS-CoV-2, the virus causing COVID-19, was identified, yet how it first emerged remains a mystery. It is getting muddier after the Office of the Director of National Intelligence of the US released a summary of the report on COVID-19 origins-tracing on August 27th, which does not rule out either natural exposure or laboratory accident but arbitrarily claims that “critical information about the origins of this pandemic exists in the People’s Republic of China”.

Facing the pandemic, the prospects of all countries are intertwined. Of all the questions worth pondering, perhaps one is more fundamental: What is the most sensible thing to do right now—guessing where the virus came from without any valid information in hand, or finding out how we could have done better, and actually do better?

Since SARS-CoV-2 is neither the most contagious nor the most deadly virus ever emerged on this planet, how did it spread to cause such a catastrophe unseen in human history? A clearer understanding of this question can surely help us “to take every necessary precaution to prevent it from happening again” , as the White House nevertheless said  in a statement to cover up the embarrassment of getting nothing serious against China from intelligence personnel.

“The US Ranked First”

On June 28th this year, Bloomburg released its COVID Resilience Rankings, with the US coming on top, indicating that the country is “the best place to be” during the pandemic. Meanwhile, World Health Organization (WHO) data showed that the US continued leading the world in both confirmed cases and deaths of COVID-19, with its volatile curve of statistics and the brewing fourth upsurge of the virus (now in full swing). The US CDC estimated that between February 2020 and May 2021, if including undetected cases, there would be approximately 120.2 million infections in the US, approximately 6.2 million hospitalized cases, and 767,000 deaths. “It’s a slaughter”, said William Foege, a US epidemiologist and former head of the CDC. In fact, if  you randomly ask a US citizen in the street whether she/he is satisfied with their government’s handling of the pandemic all along, most likely the answer would be NO.

Undoubtedly, the US is the most powerful and influential country in the world. It has sufficient health resources, a well educated population, a phenomenal public health team, and a mature and well-developed emergency response system. As the largest economy in the world, its health expenditure has long been bigger than any other country either as a percentage of GDP or in term of absolute figure. Therefore, the US should have been the world’s best nation to fight COVID-19. But as it turns out, the country ranks the first counting from the last. The Bloomberg COVID Resilience Rankings goes too far against common sense and basic human ethics, and will do more harm than good to the struggle against the pandemic in the US and beyond, since everybody knows the truth to be just the opposite. 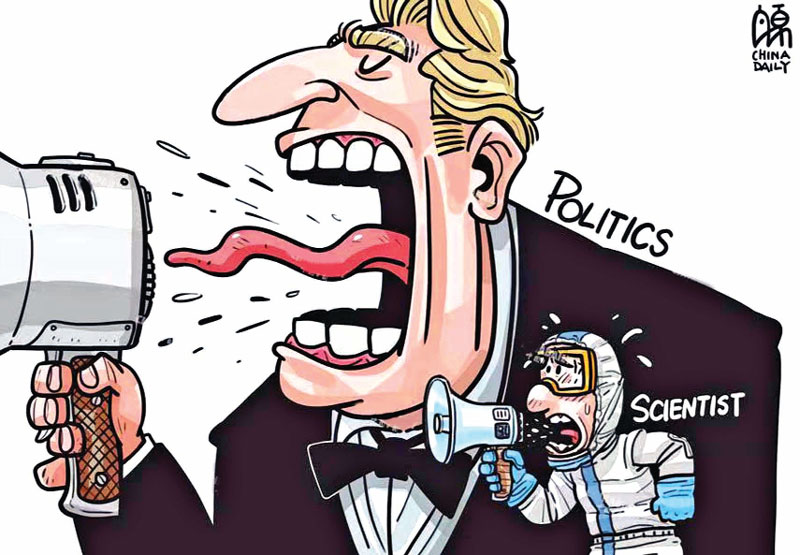 What astonishes me the most is that in front of such a tragedy, not a single US politician or official has been held accountable. The US government messed it up in the first place by a series of mishandling that has thrown the US people into a crisis. It went on to “infect” the international efforts against the pandemic with its enormous global influence and precarious policies which, in this case, only benefited the virus. It is no wonder that nowadays more and more people in different countries begin to believe it was the botched US government response to the pandemic that screwed the whole world.

In April 2020, The Los Angeles Times asked, “Catastrophes normally bring Americans together, but why not now?” The reason is quite obvious: the US’s COVID-19 response has been hijacked by partisan politics. According to a recent report jointly compiled and published by Renmin University of China, and Taihe Institute and Intellisia Institue, two renowned Chinese think tanks, the Democratic and Republican Parties are “doing everything for political gains” when dealing with the pandemic.

The report pointed out that at the beginning of the crisis, the Trump administration repeatedly ignored warnings, and tried to downplay the risk and slow down their response, because at that time the pressure on red states was relatively low, and protecting the economy and jobs would help stabilize the Republican base. When the 2020 presidential election loomed large, the two Parties went all out. In a country where economic indicators are the key to influencing votes, downplaying the virus and quickly rebooting the economy would benefit Team Trump. Republicans accused Democrats of spreading fear for political gains, while Democrats sought to retake the presidency by attacking Trump for covering up the outbreak, “using American lives to boost the economy”, and failing to contain the virus. In fact James E. Clyburn, Chairman of the US COVID-19 Crisis Subcommittee, blamed the federal government for not having a unified national strategy to protect people’s health even six months after the outbreak in the US.

According to the report, till now the two Parties are still prevaricating at different levels, and bickering over issues ranging from testing, masks, social distancing, home quarantine, and vaccination to the allocation of strategic medical reserves, emergency relief bills and so on. The anti-pandemic policy has become a bargaining chip in their political game, hampering responses at federal, state, and local levels and antagonizing the executive, legislative, and judicial branches. The US, the report went on to say, under the double blow of the virus and man-made misfortunes, has fallen into a vicious cycle of “fighting the virus, protest, economic recession” and missed window periods over and over again to contain the disease. What’s more, what the US government has done not only led to a fiasco within its own borders, but also took a heavy toll on the world as well.

From Superpower to Super spreader

While “going viral” at home, the US government has failed to take any effective exit control measures, thus indirectly exacerbating the global spread of the pandemic. According to data released by its National Travel and Tourism Office, 23.195 million US citizens travelled abroad from April 2020 to March 2021. The Renmin University Taihe-Intellisia report noted that not only were their destinations worldwide, but they also had the highest number of departures by land, 13.797 million, mainly to Mexico and Canada, and 9.398 million from airports. More importantly, the peak of the pandemic in the US overlapped with the peak of the outbound travel of US citizens. From November 2020 to January 2021, the average daily number of confirmed cases in the US registered an all-time high of over 186,000, while the average daily number of US citizens travelling abroad also reached a peak of 87,000.

Things didn’t stop here. According to the New York Times, the US was “exporting the virus” by returning thousands of illegal immigrants, neither quarantined nor tested yet potentially infected with COVID-19, to their home countries, which resulted in a sudden influx of imported cases from the US to these countries. Twelve countries including Costa Rica and Kenya publicly said that their “patient zero” of COVID-19 came from the US. Ignoring the opposition of the international community and disregarding international morality through massive deportation, the US government caused the pandemic to intensify in developing countries that were not fully equipped to deal with it.

More dangerous than the coronavirus is the “political virus” spread by the US government all over the world. Instead of taking the lead to curb the global pandemic, the US government has resorted to “origins-tracing terrorism”, blaming other countries without any proof for “leaking” the virus while being the most suspicious country itself. It has also hastily quit the WHO when it was needed the most and then rejoined only to continue its political games over the pandemic. Its politicization of a scientific issue has devastated global unity, a behaviour that reflects its domestic politics yet has far worse ramifications.

What may touch a nerve with many people in Bangladesh is how reluctant the US government was when asked to share its over-large vaccine stockpile with countries in dire need. Dr. A. K. Abdul Momen, Hon’ble Foreign Minister of Bangladesh, has expressed his frustration on numerous occasions over the selfishness of a number of Western countries including the US. In fact, long before any vaccine was approved for use, rich countries such as the US had already started “hedging their bets, reserving doses that far outnumber their populations, as many poorer nations struggle to secure enough”, according to the New York Times, which revealed that if all the doses the US has claimed are delivered, the US could inoculate its population four times over. The ABC reported on April 25th this year that the US had been criticized for blocking other countries’ access to vaccines, such as banning the export of key raw materials used to produce vaccines in India.  The Wall Street Journal reported on May 17th that the US had by then exported only 3 million doses of COVID-19 vaccine, less than 1 percent of its vaccine production.

The Renmin University-Taihe-Intellisia report also highlighted the fact that under domestic economic pressures, the US in a year and a half printed nearly half of all the dollars for more than 200 years! With the dollar dominating global currency, the US government is shifting its own economic risks resulted from the pandemic to the whole world. This is, as a Chinese saying goes, “drinking poison to quench thirst”, since such a temporary stimulus will not bring any long-term growth either to the US or to other countries. This beggar-thy-neighbour approach would be particularly harmful to small and poor countries which are economically vulnerable and whose coffers have already been drained by the procrastinated pandemic. Needless to say, the US’s cash printers have aroused antipathy from countries all over the world.

The disease respects no borders and refuses to back off easily. It might have started as a natural disaster but it is definitely a man-made calamity now. Nearly one and a half years into the pandemic and the US government continues with its passive actions. Many people in the US start to ask why, while others are wondering how did it become so bad. Seldom, however, do they go deeper to think: is the US’s mishandling of the pandemic merely an administrative blunder or a systemic failure?

One of the central propositions of the Chinese political philosophy is “sageliness within and kingliness without”. It means a person should first focus on on self-improvement to build a proper and strong “inner world”, and then pursue sound politics and implement good governance in the real world. Unfortunately, if the US government considers itself as the “king” or “ruler” of our world, it fails dramatically by both standards when handling the pandemic: the country itself is in a mess, and it has no spare effort to create a better world, if not to make things worse.

On September 2nd, President Xi Jinping said in his remarks at the Global Trade in Services Summit: “Let us join hands to defeat the COVID-19 pandemic and get through these tough times. Using peace, development and win-win cooperation as the ‘golden key’, we will be able to address the challenges facing the world economy and international trade and investment, and create a brighter future for all.”

In a globalized world, at this critical juncture for all, we are more than ever like passengers in the same boat, with a shared destiny and future. We should not miss historical opportunities, but more importantly, we should not make historical mistakes. It is our sincere hope that the US could soon find its “sageliness”, and start to take a responsible attitude to its people, to history, and to the world.

The writer is the present Chinese Ambassador in Bangladesh 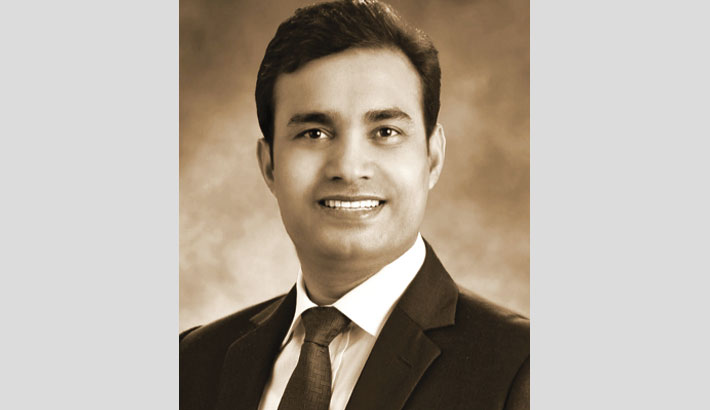