The flood situation has improved further in the country’s northern region as the water level in major rivers is declining.

Though the displaced people have started returning to their homes, life in the flood-hit areas is yet to return to normalcy.

Thousands of people marooned by flooding in 13 different districts are passing days in extreme misery amid an acute crisis of food and pure drinking water and the spread of waterborne diseases.

The flood victims are desperately looking for relief. People are rushing to any approaching boat or vehicles in hope of receiving relief items.

The risk of an outbreak of diarrhoea and other waterborne diseases is also high in flood-affected areas.

“All the major rivers of the country are in falling trend which may continue in next 72 hours,” said Arifuzzaman Bhuiyan, executive engineer of Flood Forecasting and Warning Centre (FFWC).

The local administration has been continuously distributing relief materials in the worst-affected areas since the flood began.

Simultaneously, the Department of Health has undertaken measures to prevent any outbreak of water-borne diseases in flood-affected areas amidst the coronavirus pandemic. 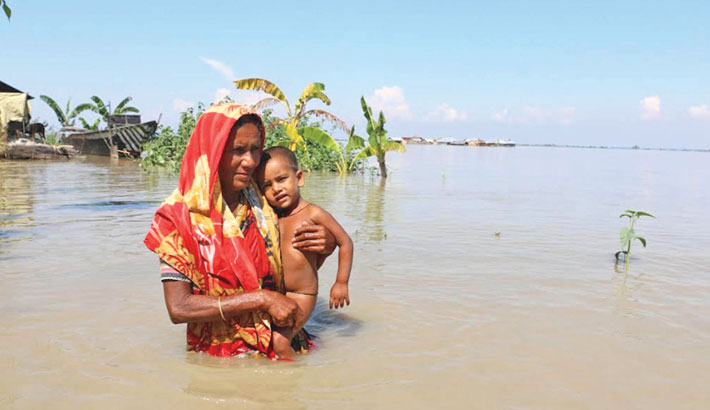 Farmers have brought jute to a local market for sale at Dighirpar in Tongibari upazila of Munshiganj district. The photo was taken on Saturday. Reaz Ahmed Sumon