Saki Tazwar got promoted to Class-IV from Class-III last year attending virtual classes sitting at home as in-person teaching at schools was closed amid the coronavirus pandemic.

While attending classes online, he had to wear school uniform. However, as only his body’s upper part was seen on camera, Tazwar used to wear only his school shirt with casual trouser and did not put on shoes.

When the government announced the reopening of schools from tomorrow, Tazwar’s mother Saika Rahman discovered that his son’s school trouser has shortened and the pair of shoes is not coming to the feet.

Tazwar is a student of Mohammadpur Preparatory School in the capital. While speaking to this correspondent, his mother Saika Rahman was buying a readymade trouser for his son’s school uniform at New Market.

“I’ve heard that students of Class-IV have to attend classes a day in a week. Before going to school, my son needs school trouser and shoes. I’m buying his trouser now and will go to Elephant Road to buy school shoes. His school shirt is getting shorter but he would be able wear it for a few more months,” she said.

Like Saika Rahman, thousands of guardians have rushed to tailoring shops, readymade dress shops, footwear and bag outlets, bookstores and stationery shops following the announcement of the government to reopen schools and colleges, giving businesses related to education a new life.

Owners and staff of tailoring shops in Elephant Road and Farmgate areas said they are getting a good number of orders for school uniforms since the reopening of schools is announced.

“We get hundreds of orders of school uniforms every year which we haven’t received during the school closure. The government’s decision to reopen schools has unlocked a new avenue for our business,” said Mozammel Haq, owner of Taj Tailor and Cloth Store at Indira Road in Farmgate.

“Many guardians are coming to us and placing orders for new school dresses and our staff are working round the clock to meet their demands in time,” he added.

Bashundhara City Shopping Mall houses some of the largest footwear outlets in the country. Several staff of different shoe outlets in the mall said they are making good business of school shoes since the school reopening announcement.

“The sale of footwear of students is going on in full swing and we’re bringing shoes of new designs,” said Nurunnabi, a sales associate of Apex Footwear outlet at Bashundhara City Shopping Mall.

Rashed Habib, owner of Bag Unlimited, a leather bag shop at New Elephant Road, said he is satisfied as the sales of school bags in his shop have increased a lot in the last few days.

Students and their guardians were seen purchasing different stationary items at Sumon Stationery in Dhanmondi’s Shankar. Fatema Binte Mahbub, a 10th grader who was buying different items, said, “My school is going to open after so many months. I have exercise books, pens and pencils. Yet I need some more stationary items and do some photo copies of hand notes.”

Polash Hossain, an old bookseller in Nilkhet, said the reopening announcement of schools has boosted their sales. According to him, during the pre-pandemic period, he used to sell books of Tk 6,000 per day that reduced to Tk 1,000 during the pandemic.

It has turned around to Tk 3,500-Tk 4,000 now since the school reopening announcement was made by the government.

With 4.5 crore students from pre-primary to university levels, there are about 2 lakh educational institutions in the country. According to media reports, businesses based on the academic activities of students have lost around Tk 70,000 crore until August this year due to the coronavirus pandemic.

The government closed all educational institutions from March 17, 2020 to contain the spread of coronavirus. 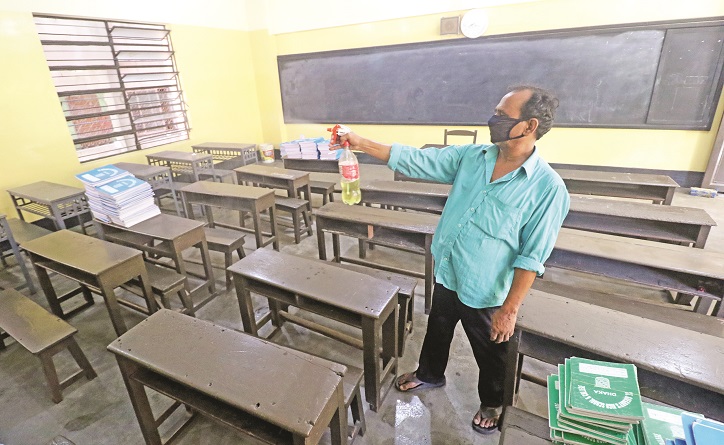