The Labour Force Survey (LFS) conducted in 2017 shows that the total Civilian Labour Force (CLF) was 63.60 million of which 43.50 million were male and 20.10 million are female. The growth rate of labour force far exceeded that of the total population and the demand for labour. This high growth rate of labour force compared to the growth of the population is seen primarily owing to the increasing female participation rate in labour force. Quota system in service, work opportunities in garment industries, food for work programmes for women, scholarship for women’s education emphasis on gender equality activities. 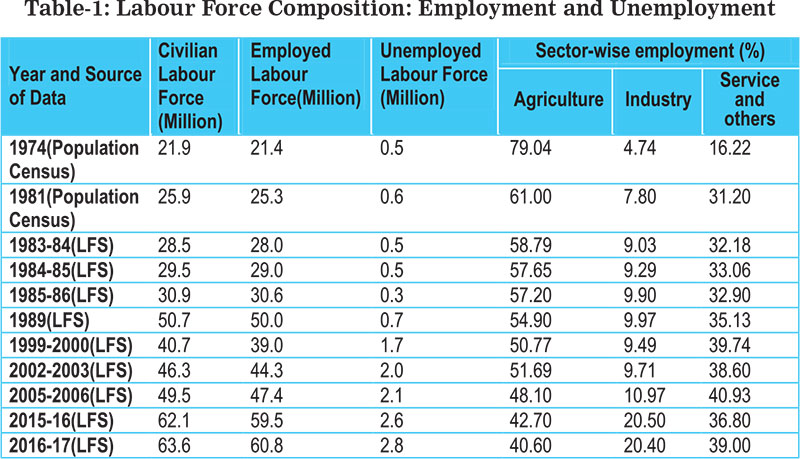 At present the employment rate is very low compared to the growth rate of GDP, as well as the increasing rate of labour force in labour market. As a result, employers employed labours at low cost and labours are compelled to sell labour for subsistence. It also shows that the employment generation has been virtually stagnant in public as well as private sector in general and has declined sharply, particularly during the corona pandemic. The whole situation indicates a retardation employment growth in the 2020’s.

The unemployment problem appears to be severe in both rural and urban areas of Bangladesh. The percentage of unemployed labour force in urban and rural area is 19% and 81% respectively. The rate of unemployment continues to increase. Virtually no new industrial enterprise has been set up in the country during the last one year. Moreover, due to automation employees are either losing their jobs or are under a constant threat of losing them at any moment. In urban area, the unemployment problem has increased owing to the Covid-19 pandemic in general.

Each year more than 1.5 million labours add to labour market, of them 70% are employed. Increasing supply of labour force has been creating more unemployment problems. The unemployed labour force may increase day by day (Table-1). Now the total unemployed labour force in the country is around 30 million. The slow growth of modern industrial sector is unable to absorb the surplus labour force coming from rural sectors. This has actually been the situation prevailing in Bangladesh for quite a long time. With such a staggering growth of unemployment on hand, it would be an uphill task and major challenges facing the government to provide employment to the rising number of new entrants in the Civilian Labour Force.

The writer is a member, University Grants Commission of Bangladesh