Launching of Bangabandhu Satellite-1 and Benefits

Bangabandhu Satellite-1 is the first terrestrial communication and broadcasting satellite of Bangladesh. It was launched from the Kennedy Space Center on May 11, 2018. Through this, Bangladesh was added as the 57th country to launch its own satellite. The project was implemented by the Bangladesh Telecommunication Regulatory Commission under the Department of Posts and Telecommunications and was the first parody launch of a Falcon-9 Block-5. 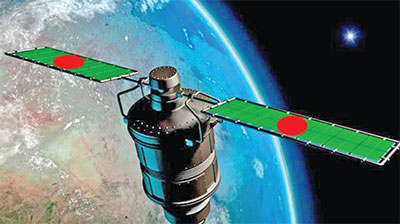 Among this Tk 1,315.51 crore was allocated from Bangladesh government’s own funds, which is about 44% of the total expenditure. Besides, a plan has been taken to collect Tk 1,652.44 crore for this project through Bidders Financing. In September 2016, the Government of Bangladesh signed a loan agreement with Hong Kong Shanghai Banking Corporation (HSBC) worth about Tk 1,400 crore. This amount has to be paid in 20 instalments in 12 years with interest at the rate of 1.51%. Orbital slot approval was obtained in December 2014 from the Russian company Intersputnik. Its value is 218 crore 96 lakh Taka.

The Bangabandhu-1 artificial satellite is placed in the geostationary slot at 119.1 degrees east longitude. It was named after the name of Bangabandhu Sheikh Mujibur Rahman. It was designed by Thales Alenia Space of France. And it was launched from the US privately owned spacecraft SpaceX.

Bangabandhu Satellite-1 is carrying a total of 40 KU and C-brand transponders with a capacity of 1600 MHz and its lifespan is supposed to be 15 years. Bangladesh and Bangabandhu-1 are written in English on the colour design of the red-green flag of Bangladesh in the part of the satellite bait. There is a monogram of the government of Bangladesh.

The Bangabandhu Satellite-1 satellite is being controlled from the ground station of Bangladesh after its full launch. For this purpose, ground stations have been set up at Joydevpur in Gazipur district and Betbunia in Rangamati district. The Joydebpur ground station is the main station. And Betbunia station has been backed up as a second station. In addition, two ground satellite stations have been set up in Indonesia and the Philippines. Different media organizations, not only in Bangladesh but also in other countries of the world, are currently using Bangabandhu-1 satellite rental transponders. Notable among them are 2 private TV channels of Honduras, 1 private TV channel of Turkey, 1 private TV channel of Philippines (some more contracted), 2 TV channels of Ghana (a few more are waiting), 1 private TV Channel of Cameroon and 2 online based TV Channels in South Africa.

There are 3 types of facilities available from Bangabandhu Satellite-1. TV channels hire satellites to run their broadcasts properly. In this case, foreign exchange will be earned by selling the capacity of Bangabandhu-1 satellite. On the other hand, the country's TV channels are using it to keep the country's money in the country. The total frequency capacity of 40 transponders is 1,600 MHz. Using its bandwidth and frequency, internet facilities are being provided in deprived areas such as subsequent and haor areas. The Bangabandhu-1 satellite is also being used to expand internet and banking services, telemedicine and remote education in remote areas.