New Zealand stand-in coach Glenn Pocknall on Tuesday said that his charges are ready to level the series during the fourth T20 international against the hosts Bangladesh.

The Kiwis kept their chances alive of winning the ongoing five-match T20I series in Bangladesh after outplaying the hosts by 52 runs in the third game at the Sher-e-Bangla National Stadium in Dhaka on Sunday.

The win came as a huge relief for the visitors after they lost the opening two matches of the series by seven wickets and four runs respectively.

The Blackcaps had displayed improved performance in all departments on their way to winning the third match and they are now eyeing to win the fourth match to make the last game a series-deciding one. 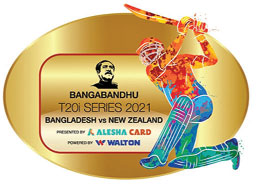 Pocknall admitted that they are also preparing for a strong fightback from the hosts, who aren’t so familiar with losing games, more specifically limited-over matches, at home soil.

Before the series against New Zealand, the Tigers clinched a 4-1 series win against Australia during a similar five-match T20I series while they also won preceding two home ODI series against Sri Lanka and West Indies by 2-1 and 3-0 margin respectively this year.

The defeat against New Zealand in the third T20I was Bangladesh’s only third defeat in the last 14 T20Is at their own backyard since 2019.

“They’ve had a fantastic record not just against us but also against every other team in the world (at home). So, for them to lose, they’ll come back pretty strong and they’ll be hurting from that,” said the New Zealand coach.

“We’re certainly prepared for a backlash from them but we’re going to fight fire with fire, so to speak, and we’re certainly up for it as well,” he added.