Demand for arrest of Mahfuz Anam, wife gets louder

Bangladesh Sanatani Oikya Parishad on Friday demanded arrest of The Daily Star Editor Mahfuz Anam, his wife Shaheen Anam, also executive director of Manusher Jonno Foundation, and others involved with the NGO on charges of hatching conspiracies against the Hindu community and tarnishing the government’s image.

It made the demand at a roundtable discussion held at the Jaitya Press Club in the capital in protest against the attempt of some NGOs and vested interests to change the traditional Hindu family law.

Speakers at the event chaired by Govinda Chandra Pramanik, secretary general of Hindu Mahajote, blamed Mahfuz Anam, Shaheen Anam and others for creating division in the Hindu community, hatching conspiracies to wipe out the Hindus, making attempts to reform the traditional Hindu law in violation of the constitution and creating chaos putting the Hindu community at loggerheads with the government. Hindu Lawyers’ Association General Secretary Advocate Sree Sankar Chandra Das said Mahfuz Anam, Shaheen Anam, Angela Gomez and Manusher Jonno Foundation are trying to change their religion. “They don’t talk about lots of our other problems like Enemy Property Act. But they want to amend the thousand-years-old traditional Hindu law though it’s a settled issue.”

“No one in our Hindu community is facing any problem with the law but why the Hindu law is the cause of your headache?” he said.

Mentioning that they all united, he urged the government to arrest Mahfuz Anam, his wife Shaheen Anam and all those involved with Manusher Jonno Foundation. “Or else, we’ll announce tougher programmes.”

Advocate DL Roy Chowdhury said once Mahfuz Anam, Shaheen Anam and Matiur Rahman were involved with Communist Party. “They’re now playing tricks to destabilise the country in the name of reforming the law of the Hindu community.”

They are not talking about lots of other problems faced by the Hindu community but they are now coming to amend the law, he said.

Roy said, “We’ll go for a tougher movement against Mahfuz Anam and others if they provoke us. Or else, they’ll say after a few days that it’s better to take the bodies of Hindus to graveyard instead of crematorium. Steps will have to be taken to stop the path of these conspirators to bring money from abroad by selling names.”

Citing their statement that Hindu girls do not get share in property under the existing law, he termed this completely false. “They say Hindu women want divorce but the reality is that no Hindu woman wants divorce.” 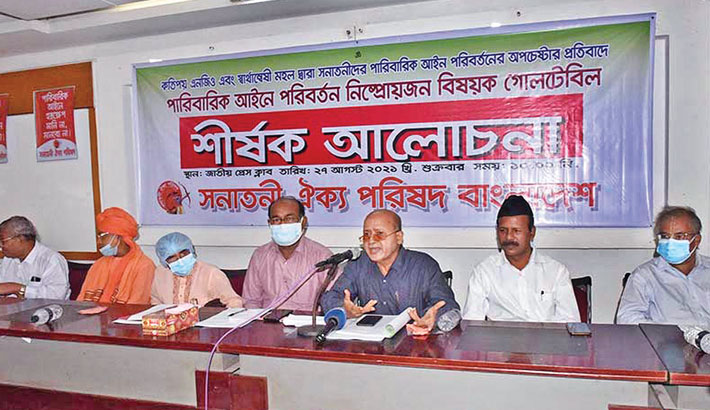 Bangladesh Sanatani Oikya Parishad holds a roundtable discussion at the Jaitya Press Club in the capital on Friday, protesting against the attempt of some NGOs and vested interests to change the traditional Hindu family law.     —SUN PHOTO