Impacts of Romance on Nazrul Songs

The comings and goings of romance in Kazi Nazrul Islam’s life has had a very important influence on him and consequently on the history of Bengali art and literature. He has written many love songs depicting the soft and lovely touch of a woman's heart, as well as composed thousands of sad songs of being rejected in love. In Nazrul songs, therefore, the image of a woman has emerged in a unique analogy and in the form of a heart-touching melody. The woman is sometimes the unique source of romantic thoughts in his songs, and sometimes the goddess and priestess. Women are sometimes depicted as the source of pain of the heart and sometimes the extraordinary life companions of happiness and woe. With the arrival of the many loves in the life of Nazrul, his music has become diverse.

Poet Kazi Nazrul Islam can also be called an epoch-making poet. The poet was born in 1899 and had before him the gates of the unbelievable scopes of the twentieth century. He was the poet of the heart of Bengalis until he fell ill in 1941 with an incurable disease. He was a poet of the people, by the people and for the people in a sense of democracy. He was a poet of humanity, secularism, egalitarianism and the poet of the liberation of the motherland. He was also a poet of love and rebellion. But his rebellion was also dedicated to the establishment of a humanist-society. To establish a society free from exploitation and deprivation, he has composed hundreds of patriotic songs. He was very bounteous and had a very easy and simple heart. So, again and again, he lost his heart to women. Focusing on love, someone accepted him, someone rejected him. On the contrary, even if he rejected someone’s love, he did not write anything negative nor did he walk the path of being a misanthropist. Moreover, he has also been deceived by women cruelly. But he did not compose any songs or poems as a misogynist, as he did not want to be recognised as such himself. On the contrary, in thousands of songs, Nazrul has enunciated immense love for women. He had never written any song that may have given any controversial concept about relationship between man and woman, psychologically. He was successful in portraying the equality of man and woman in his literature. 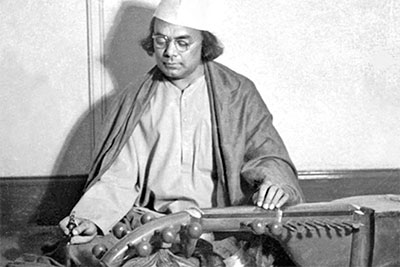 Although Nargis is considered to be the first love and first wife in Nazrul’s life, in fact, she is not the first woman in his life. It is known that Nazrul fell in love with a girl named Shahida Khanam in his school life. Biographer of Nazrul claims that she was his first beloved. Azhar Uddin Khan has clearly written about this in his book 'Bangla Sahitye Nazrul'. However, nothing is found in any other Nazrul biographies on this subject. Moreover, Azhar Uddin Khan writes, ‘There was an unsuccessful love affair behind his enlisting as a soldier in the war. Nazrul fell in love with a girl in class ten at Shearsol School but this affair did not come to light legally, as the girl got married elsewhere. The girl's father was rich and did not agree to marry his daughter with Nazrul as he was poor. But Nazrul kept her silver hairpin carefully close to him, but later lost it. The girl's name was Shahida Khanam. Then in the same book Mr. Azhar Uddin wrote, ‘While studying in Darirampur School, he fell in love with the sister-in-law of Khizir Ali of that village. Later on in the city of Mednipore, a sixteen year old Hindu girl took off her gold necklace and put it on Nazrul at a reception. But alas! Society did not allow her to live.’

Then another woman comes into the poet's life whose name is Syeda Khatun, afterwards named by Nazrul as Nargis, as a symbol of his love and affection. The darling of the poet, Nargis, was the first stroke of true unconditional love in his life. Nazrul researchers have presented Nargis as a very important part of Nazrul's life. In March or April 1921, Nazrul visited the house of his friend Ali Akbar Khan at Daulatpur, Cumilla. There the poet's acquaintance and relationship with Ali Akbar Khan's niece Nargis became deeper and deeper. Nazrul went there to attend a wedding ceremony. He played the harmonium and sang for the invitees and everyone was mesmerised by his song. Syeda Khatun was also present on the occasion and was impressed by the unique presentation of the poet's melodious, euphonious and sweet music. Just as Nargis was caught by the tune and tone of Nazrul, at the same time the poet also became attracted by the immaculate beauty of Nargis.

In this way, multiple love and romance came into his life till he got married to Nargis. They got married with the consent of both of them. But for some unknown reason they disagreed abruptly at a certain stage. Some biographers, however, have tried to say that Akbar Ali Khan offered Nazrul to stay in the house as a househusband, but Nazrul refused it vehemently. At this stage, Nazrul's life was full of uncertainty and massive sadness. One day, Nazrul left the house without telling anyone for some unknown reason and with undiscovered touchiness, never to return. But Nazrul could never forget Nargis for even a moment until he became afflicted with an unknown disease. Hundreds of songs of apology have been dedicated to Nargis. This means that the poet was either very passionate to his beloved unconditionally or he did some injustice to Nargis or cheated with her. That’s why thousands of songs were composed by the poet, which are full of deep sorrow and bear the essence of genuine love for Nargis.

Returning from Cumilla, Nazrul married Promila. Promila was Nazrul's life partner till her death. In the meantime, in 1930 Nazrul suddenly fell in love with Fazilatunnesa who was the first Muslim female student at Dhaka University. This love did not come to any fruition because Fazilat did not want to be the life partner of a married person like Nazrul. But Fazilatunnesa showed her palm to Nazrul, as Nazrul was an astrologer also. Fazilat would hear Nazrul’s songs and showed devotion to Nazrul and thus conquered his mind, but eventually she ignored Nazrul unfeelingly. It is very true that a chaste woman usually can become the second wife of a married man but she never wanted to be his spouse at all. So, Fazilat was friendly with Nazrul. But Nazrul was serious about Fazilat and was disappointed to a great extent. That is why, Nazrul wrote a lot of letters to Fazilat afterwards on returning to Kolkata, but did not get any reply from her. The poet was severely saddened and composed innumerable songs of parting. This may be the reason why Nazrul has been able to write songs of deep love and profound pain from the innermost core of his heart.

Nazrul had fallen in love again and again in his life. Hence, women's love has a unique influence on Nazrul's poetry and lyrical poetry. He is a poet of both resentment and love. He composed diversified songs in his life with the arrival of many women in his life. The song of adversity is sweet. And the song of heart-broken pain has been composed because of his failures in love. Nazrul will live on forever. He will live through his art-literature and song-poetry. He will live to present us with the joys and sorrows of man in his music. He has become our companions in happiness and woe. His contribution to the world of literature and culture will remain forever immortal. He will be an eternal source of resurrected inspiration in the field of world literature.

The writer is an enlisted lyricist

in the Bangladesh Betar and Television