Bangladesh Muktijuddha Mancha, an organisation of the descendents of the freedom fighters, on Saturday demanded arrest of The Daily Star Editor Mahfuz Anam and Prothom Alo Editor Matiur Rahman for their alleged involvement in anti-state conspiracies.

They came up with the demand at a human chain at the foot of Raju Memorial Sculpture on the Dhaka University campus in the capital.

"We believe that the 1/11 conspiracy and the 2004 grenade attack are tied to the same thread," said Aminul Islam Bulbul, central president of the mancha.

"We demand the arrest of the editors who are behind all these acts. They slandered in the name of helping people with information and were involved in conspiracies. The editors of Prothom Alo and the Daily Star are among them. We demand that the government expose their faces. The conspiracy, they hatched against the state, is still going on. Bring them to book," he said.

"The attack was carried out with the direction of then Prime Minister Khaleda Zia," he added.

Al Mamun, general secretary of the mancha, said everyone, including Mahfuz Anam, the plotter of 1/11 political changeover, should be brought to book.

The Daily Star editor at a talk show acknowledged that he published news, supplied by DGFI against Sheikh Hasina, without any cross checking.

Sheikh Hasina had to languish in jail for many days while thousands of AL activists were tortured due to his mistake.

"As they are not brought to trial, they are getting an opportunity to hatch new conspiracies," Mamun said.

"But the verdict of the murders has not been executed yet. The verdict should be executed immediately by bringing back mastermind of the August 21 grenade attack Tarique Zia," he added. 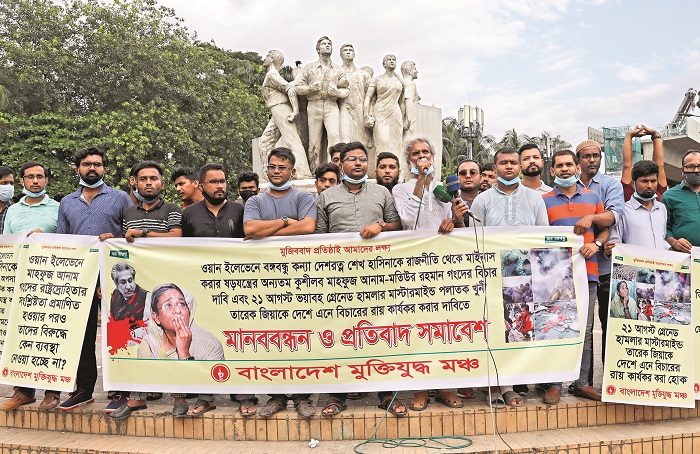