Adoption is usually viewed positively by society and has many benefits of having loving families that take care of and raise their adopted children like their own and give them opportunities for better lives. As per record, there are more than 4.4 million orphaned children in Bangladesh. Adoption can provide a favourable home to those children. Adoption generally refers to require and lift up other person's child into your family. Inability to possess a child, infertility of couples and desire to assist a baby are some of the reasons behind adoption. The emergence of adoption may protect the child from growing up with the stigma it will have to face due to its birth situation.

According to the Shariah law, one can raise a baby by not changing the adoptee's biological identity. The adoptees have to know where they came from and the circumstances of the adoption; otherwise oftentimes the kid will age feels abandoned and can always feel inadequate. Child and also the adoptive parents should follow the limitations designate by Shariah. Since Islam doesn't recognise any change within the adopted child's birthrights, adoption may be applied for all times without disrupting birthrights. After all, the adoptive parents can devise one-third of their total property to the adopted child. 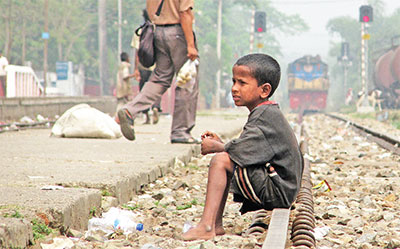 In Bangladesh, Hindu communities are able to adopt son by following the limitations designate by Hindu law. Hindu Law doesn't make a variance between a biological son and adopted son within the matter of legacy. On adoption, ties of the son together with his old family are detached and he is taken as being born within the new family, acquiring rights, duties and standing within the new family.

The family law in Bangladesh is ruled by religion. In that case, Muslims cannot legally adopt but be granted guardianship under the Act, 2013. This law doesn't give rights to adopted child to inherit assets. Under the Guardians and Wards Act 1890 (Section 7), most guardianship applications are filed. Adopted children don't share the identical rights as biological children under this guardianship act. However, it is time to rectify the act. But some experts feel that sanctioning a new law on adoption would be discord with the Muslim Shariah.

In Somalia, Indonesia, Tunisia, Turkey and Malaysia adoption is legal. These countries have departed from Shariah principles in terms of their respective adoption laws. In keeping with legislative addition to the Turkish Civil Code, the interested adoptive parents are taking financial responsibilities for the education and health of the child for a year before the finalisation of the adoption. This enables the government to verify that it is in the best interests of the child.

Considering the difficulties under the Guardianship and Ward Act, 1890, an adoption law should be approved with a detailed outline of the rights and responsibilities of the adoptive parents in Bangladesh.

The writer is a Barrister at Law