Food distributed among the destitute for 27 days

Shamsul Haque, hailing from a char area of Ulipur upazila in Kurigram, is now living in Lalmonirhat Railway Station as he has nothing except a bag, containing a shroud (a piece of white cloth used for covering the dead body).

Shamsul lost everything to river erosion and had been passing his days at the mercy of others in the station for many years. But the countrywide lockdown aimed at curbing the coronavirus surge brought more difficulties for this elderly man as he was unable to manage his food in the deserted railway station.

The Lalmonirhat unit of Kaler Kantho’s Shuvasangha came forward to assuaging the miseries of Shamsul and other destitute people of the area.

Starting from July 2, Shuvasangha distributed food items for 27 days under a programme named ‘Project Lockdown’. People in the area hailed this initiative of Shuvasangha, a social organisation of Kaler Kantho, highly. 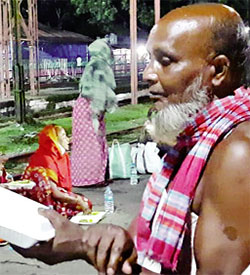 Shops and other business establishments were shut and train and bus services suspended during the strict lockdown. The railway station wore a deserted look. There was no way to earn money or collect food during this time. But who will feed the poor people there? So, the lives of the poor turned miserable. They had to roam around the whole day for managing a piece of loaf. After failing to get any food on the day, they had to wait for night to get food from Shuvasangha. 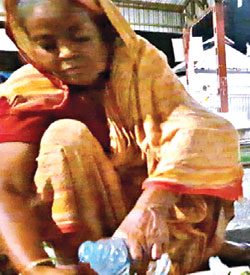 At first, the food was being cooked at the house of Jewel Rana, the office assistant of Lalmonirhat Press Club, as there was no opportunity to cook anywhere else due to the lockdown. But, the cooking venue had to change after two days as Jewel Rana’s mother fell sick. Later, journalist Tanmoy Ahmed Nayon and his wife Advocate Molina Yasmin took the responsibility of cooking. 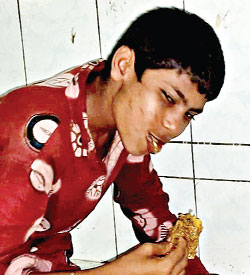 Menu as per expectations of starving people

Shuvasangha started the food distribution programme with egg-khichuri. After some days, they changed the menu realising people’s mind that serving same items every day will not satisfy the expectations of the starving people. Later, they started distributing plain rice, beef, chicken, fish and egg. Before the Eid, Shuvasangha also served Eid Special menu -- beef biriyani, egg, sweetmeat and drinking water. 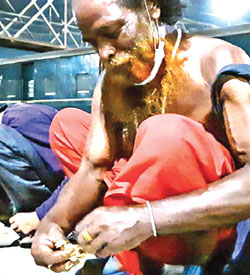 ‘Got taste of hilsa after many years’

Shuvasangha tried to choose food items considering the demand of those hungry people. So, in the 26th day of food distribution, the starving people were asked to choose their menu and some of them said, “We didn’t take the taste of hilsa for several years. If possible please serve us the national fish in the last day”. As per their demand, Shuvasangha served hilsa cooked with mustard, egg, vegetables and plain rice in the last day of the ‘Project Lockdown’. 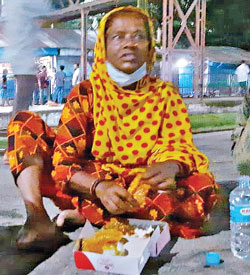 Rickshaw-van puller Rafiqul was engaged in the project from the beginning. He worked with this project for 27 days and his rickshaw-van was used every day for carrying the food items and distributing those among the poor but he did not take any money from Shuvasangha. He said, “I’m unable to join this programme by giving money but I want to stay with this by giving my labour.” 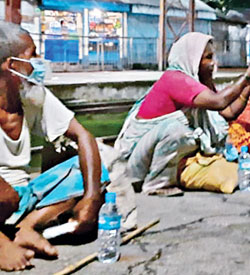 Fatema Begum has been living in the station for about 40 years. She ate the food given by Shuvasangha every day. When asked to say something about the standard of the food items, Fatema said, “No one distributed food like you. I’m very satisfied as you’ve served a variety of food items, including fish, meat and egg. Some people distributed only khichuri but you gave us various types of food.” Many others echoed Fatema. 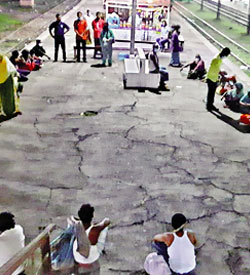 It was challenging to make the project a success as everyone was staying at home during the lockdown. But members of Lalmonirhat Shuvasangha took the challenge and tried their best to serve food to the starving people. Many people also stood by the organisation in various ways. At the end, the ‘Project Lockdown’ became successful for the joint efforts of all.