She paid homage to the architect of the country’s independence by placing a wreath at the portrait of Bangabandhu in front of Bangabandhu Memorial Museum at Dhanmondi in the capital.

After placing the wreath, the premier stood in solemn silence for some time showing profound respect to the iconic leader, who led the nation in achieving the independence.

A smartly-turned-out contingent of Bangladesh Armed Forces gave a state salute at that time, while the bugle played a tune of grief to the last post. A munajat was also offered seeking eternal peace of the departed souls of the martyrs of the August 15 carnage.

After paying tribute to Bangabandhu, the premier visited the historic residence of Father of the Nation at Dhanmondi-32 which witnessed the world’s most barbaric carnage on this day 46 years back.

She stayed in the house, now Bangabandhu Memorial Museum, for a while.

From Dhanmondi, Sheikh Hasina went to Banani Graveyard where her mother Bangamata Begum Fazilatunnesa Mujib, brothers Sheikh Kamal, Sheikh Jamal and Sheikh Russel and other martyrs of August 15 were laid to eternal rest.

She placed wreaths and spread flower petals on their graves.

The Prime Minister also offered Fateha and prayed for eternal peace of the departed souls of the martyrs.

Sheikh Hasina also paid homage to the Father of the Nation at Tungipara in Gopalganj on the occasion.

On behalf of the premier, her Military Secretary Major General Naqib Ahmed Chowdhury paid tribute to Bangabandhu by placing a wreath at his shrine there.

On the occasion, a smartly-turned-out contingent drawn from three services gave a guard of honour.

The PM’s military secretary offered Fateha and joined a special munajat seeking eternal peace of Bangabandhu and other martyrs of the August 15 carnage.

At the fateful dawn of August 15 in 1975, a group of disgruntled army officers assassinated the country’s undaunted leader, Bangabandhu, along with most of his family members and toppled his three-and-half-year-old government.

Bangabandhu’s two daughters -- Prime Minister Sheikh Hasina and Sheikh Rehana -- survived the carnage as they were in Germany at that time. 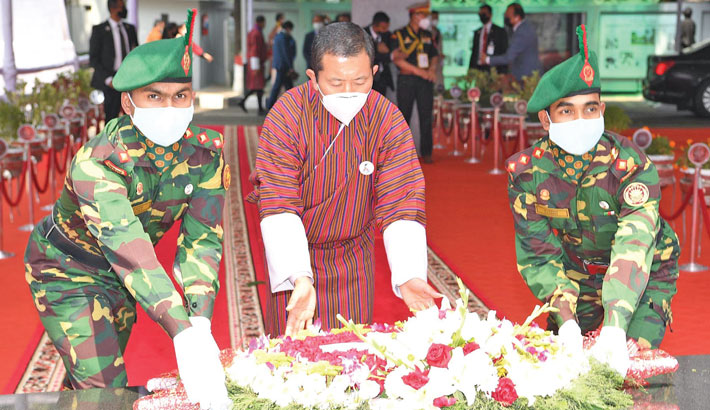 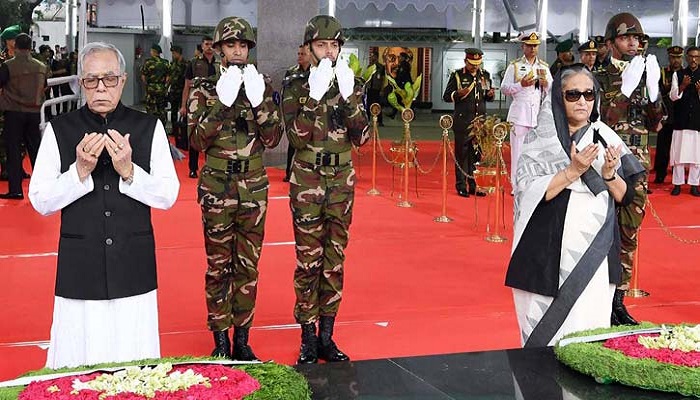