After killing Bangabandhu, the killers waited for more than 24 hours to bury him and they wanted to make sure that the funeral was done secretly. From quite a distance the vibrating sound of the rotor blades of a helicopter alerted the inhabitants of Tungipara. August 16, 1975 was a hot humid day. It was well after midday, when the giant Russian copter was circling above the dak-bungalow of the village delivering an unusual cargo. It was the coffin of the bullet-ridden body of the Father of the Nation Bangabandhu Sheikh Mujibur Rahman. A most unexpected way for a hero to return home.

“I was having my meal when I heard the unusual sound of the copter.” Abdul Makid Fakir recalled the day saying, “I ran out and found our neighbours looking up in the sky with surprise. Then we saw the copter above the dak-bungalow”. It was a horrifying scene witnessed by hundreds of villagers.

The copter stood still in the air, while a platoon of troops armed with automatic weapons jumped onto the ground and took up position in a circle to scare anyone daring to attack them. The copter slowly landed. People feared an attack on them by the troops. The news quickly spread that the copter was carrying Bangabandhu’s coffin. It was quite a surprise to see the coffin, although the whole village was in deep shock at the previous day’s news of the brutal killing of Bangabandhu. “We got the news of the assassination at around 9:15 am on the same day. A wireless message first broke the news at Tungipara. It quickly spread across the village. “It was terrible, as few could accept the shock of the death of the great leader,” said Nawab Ali who often used to accompany Mujib to his public meetings. Nawab Ali remembered how Mujib’s grave was dug. “A wireless message from the capital first ordered five graves to be prepared, a second message from Dhaka said two graves were needed. This was confusing but we guessed that the second grave would be for Mujib’s wife. We were half way through the first grave when we were told that only one grave was to be prepared. We dug the grave only eight feet away from the graves of Mujib’s parents.” 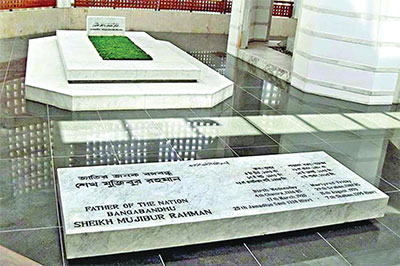 Abdul Mannaf recalled how rough the officer in charge of the army team was with them. Mannaf was among the 30 villagers selected to help the burial process. On arrival the officer asked Maulana Abdul Halim of the village to conduct the janaza for Mujib. Halim inquired whether the dead body had received any purifying bath. The reply was negative. Halim asked permission to bathe the body. The request was turned down. Halim refused to conduct janaza unless the body was washed. Halim dared to argue with the officer for a few minutes. Halim was very firm on his decision to conduct janaza only if Mujib’s body was bathed. From the very beginning the officer had been ordering the helpers to bury the coffin soon, but Halim objected. At one stage Halim said the body would need no bathing if it was given in writing that Mujib was a ‘Shaheed’. The officer was in trouble and did not wish to waste any more time. He allowed the body to be washed before burial. The men were given only 15 minutes to complete the process. Halim asked for 30 minutes explaining that 15 minutes were not enough to complete the process. The officer agreed.

In the meantime, the villagers were forced to stay away from the scene. Many wished to have a last look at the great leader. Kazi Enayet Hossain, was among thousands of villagers who encircled the area to see what was going on. “We were anxiously waiting to see the body. Some of us became angry at the decision that we would not be allowed to see our leader. However, our emotions were controlled as we saw the troops suddenly pointing sub-machine guns at us,” said Hussain, who rushed to the spot minutes before the coffin arrived. “The situation was tense. We feared gunshots would be fired at us while the army troops feared that they might be attacked by the villagers.

The troops thought that the people there might take revenge on them for killing Bangabandhu. So they wanted to hurry with the burial. They assumed the tension would die down as soon as they flew off. Meanwhile, the wooden coffin had to be broken as there was no easy way to open it. “I along with four others helped open it. At first I saw pieces of ice covering the body,” said Nazrul Islam. “The ice did not appear as crystal as they should. They appeared brownish. The body gradually emerged as we removed the ice with our hands. The bullet-ridden body was at last before us. Everyone tried to have a look. A white folded piece of cloth lay on the chest of the body. I removed the cloth. Suddenly my eyes were filled with tears. The more I stared at the body the more I cried. I saw Mujib wearing a lungi, white panjabi and a vest. The clothes showed more than 20 bullet wounds. There was blood all over,” said Islam. “We bathed Mujib’s body with a soap secretly brought from the nearby hospital and then wrapped the body with sarees before they noticed anything”.

“We were then ready for the janaza. The troops also joined it. It took only a few minutes. As soon as the janaza was over, the officer ordered the volunteers to complete the burial in 10 minutes. The troops stood by. About 14 people helped lower the body in the grave. Our emotion grew stronger as we put the body down,” said Islam nodding his head and saying, “I still cannot accept that our great leader is buried in that grave. As soon as we completed the burial the local police were ordered to clear the place. It was strictly forbidden to allow any visitor inside the area. The helicopter lifted off carrying the troops. Thousands of mourners watched as the copter vanished into the sky.”

The graveyard was a restricted place for a long time. Police patrol guarded the boundary of Bangabandhu’s home. Automatic guns were fitted on top of the roof for further security. Those who looked after the house were also asked to leave and live somewhere else, recalled Nirmal Biswas who served as a servant in the house since he was 12. “I was kicked out by the police. They threatened to lock me up if I ever tried to come near the area. In fact, I was once arrested for attempting to go near the grave”.

Many, however, risked defying the warnings just to see the grave. A dozen or so people were arrested. “How could they expect that we would avoid seeing Mujib’s grave,” said Ekram. “This is Mujib’s home. He grew up here, stayed in that house and earned the highest respect as a leader. How could we forget him? I will regret for the rest of my life for not paying the last respect to Mujib,” said an old man in his eighties.

Bangabandhu will remain in the hearts of the people of Tungipara and its neighbourhood. The remains of Mujib’s bullet-ridden body rests in peace in the white marble grave only 20 feet away from the house where he grew up as a child and was destined to be the Founder of the Nation. It was a blessing from the Almighty Allah that his daughters survived and returned to Bangladesh facing all kinds of odds from the military rulers. No government took initiatives to ensure justice for the killing of Bangabandhu, until his own party came to power with people’s verdict in 1996 under the leadership of his daughter Sheikh Hasina. The new generation must know that all the subsequent military and civil governments coming to power after August 15, awarded and rehabilitated the killers. General Ziaur Rahman – turned president, General Ershad turned military ruler and former prime minister Khaleda Zia created various opportunities for the killers and politically rehabilitated them. Till now the conspiracy of the followers of those self-proclaimed killers of Bangabandhu goes on. We must remain alert to thwart their evil designs. The pro-Pakistani killers wanted to bury the Bangladesh of Bangabandhu's dream, born out of the spirit of freedom, which led to the 1971 Liberation War. Have they been able to do that? No. The followers of these killers must be eliminated from the country.

The writer is Treasurer, Jagannath University