The Shot That Was Heard Around the World

Oh conspiracy: Shams’ thou, to show thy dangerous brow by night, when evils are most free? Twice in the past years, I came in close touch with two of the best Security Services in the world - once when I resigned from the Pakistan Government in 1971, in Geneva during the war of liberation and second time when I was in our Permanent Mission in New York as Deputy Permanent Representative in early eighties. In Berne and Geneva, the top Swiss Security agencies gave me a series of Security Advisories for myself and my family as a political asylee.

In New York, the US Mission advised us about our day-to-day security, particularly after the Turkish Centre on the First Avenue (BangladeshMission) was bombed by several high-powered explosive devices in 1980 & 1981. Differences in their modalities notwithstanding, security services of both the countries agreed on one rule of the thumb: never take lightly any security situation.

In the 90s’, I recall , there was 22 bore rifle shot on the window pane of Dr. S. A. Malek, Prime Minister's Political Adviser, on January 28. He was unharmed.

To many minds the single shot had a sinister meaning and it echoed the morbid gasping of a decadent cabal, stalking in darkness of the penumbra as discerned in such desperate utterances as "the daughter of the late Sheikh Mujibur Rahman has not yet become LATE" 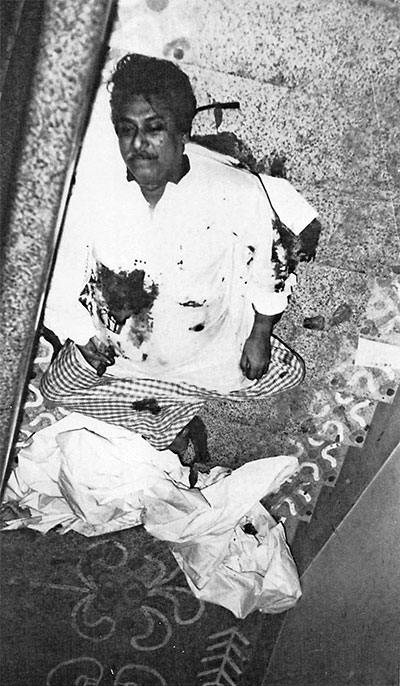 These jingoistic phrases smack of a certain kind of mindset. We are familiar with Hitler's brown shirts or for that matter Mussolini's black shirt.

A country born in the blood of 3 million martyrs was inevitably going to face opposition from those who never believe in the very creation of sovereign Bengali nation. The enemies of the country took full advantage of the generosity of Bangabandhu, who believed in the genuineness of conscious. But the detractors mistook the generosity as weakness.

They frustrated even the moderate use and implementation of the collaborators Act. They misinterpreted the very essence of LIMITED AMNESTY granted to certain sections of the perpetrators of the crime and created artificial obstruction- in the path of Justice and Rule of Law. We could not try the Generals who committed genocide in Bangladesh. We were not allowed to take lessons from history. The pressure was backbreaking: Charles De Gaulle did not forgive the collaborators of the Vichy government. Pierre Level the Vichy Prime Minister was executed. Marshal Pétain, the hero of WWI, but collaboratorof the occupied Vichy France, was given life imprisonment. That was the moment of-truth for the French leader? We couldn’t even hold a symbolic trial of murderers of the Bengalese in the lavish green fields of Bengal, innocent men and women and young heroic boys who laid down their lives for their motherland, independent Bangladesh.

We couldn’t implement even a portion of the Counsel of max Plank Institute in Germany. The War Crimes Tribunal Convention, on which we spent so much time and effort in 1972 and 1973, must be collecting dust in our Mission in Geneva or somewhere in the Ministry of Law. August 15 and November 3, 1975 thus will always be remembered as the most shameful days in our national history. Again if we look at history, we notice that liberal- Democrats have with minor exceptions, been always opposed by vested comprador interests. God sey’s brother does not yet admit that the Mahatma's assassination was a great crime. Earlier on, both Abraham Lincoln and Martin Luther King were felled by assassin's bullets because they both wanted change; they both had DREAMS to transform the society to a higher level. They wanted to break the barrier of superstition and prejudice. They wanted to keep peace with the march of history - which is one of progressive movement forward; Bangabandhu's success in giving a piece of sovereign land to the Bengalese nation was too much for the dark obscurantist forces of Status Quo. His brutal murder is the testimony to the conspiracy that was hatched from day one to push back the spirit of secularism. Even the Constitution was amended by the TIN-DRUM soldiers to consolidate their unconstitutional rule. What an act of cowardice.

The rightist works always with great alacrity: look at Bill Clinton's White House. Hillary Clinton put her finger on the right place in the defense of her husband. And look within days the American people saw through the game of mischief mongers. Defying media trial, the latest poll-rating of the President hadreached an all-time high. This is the virtue of democracy, virtue of transparency.

The safety of the Prime Minister of the country must not be compromised. Let us not forget that Sheikh Hasina is not only our Prime Minister. She is the daughter of the Father of the Nation.

Hasn’t the time come for the votaries of democracy and Rule of Law, particularly for the defenders of the Fourth Estate to stand up and be counted? Let's all remember that TRUTH hurts - but SILENCE KILLS.