Public life has started to return to normality as public transport began plying and offices and markets reopened across the country on Wednesday shortly after the strict lockdown was relaxed.

Commuters and vehicles were found rushing to streets in the morning, creating traffic jams at many points in the capital.

Police said people in large numbers are coming out of their homes to the streets, footpaths and kitchen markets, ignoring health guidelines.

People without masks are found on footpaths, shopping malls, kitchen markets and vehicles in busy areas of the capital. 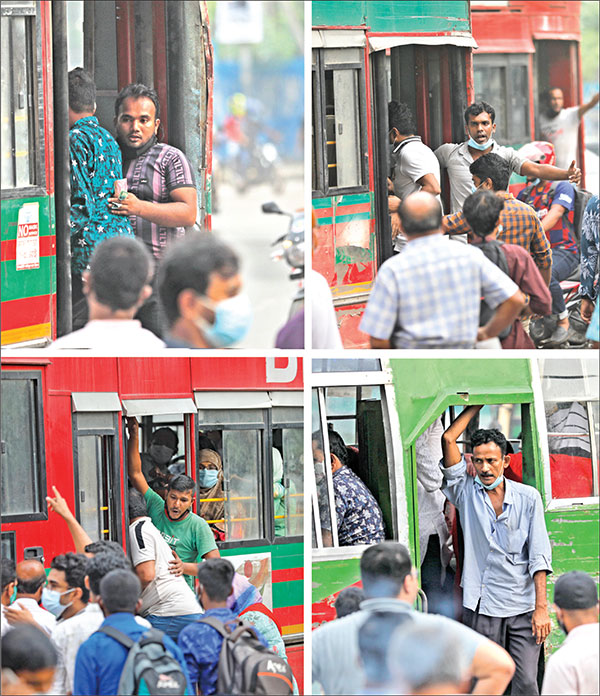 Sadarghat, the main waterway terminal of the capital, was overcrowded as public transport resumed operation.

Besides this, large numbers of people and vehicles were seen at ferry terminals at Shimulia in Munshiganj and Paturia in Manikganj.

Huge traffic congestions were also seen in and around the Kamalapur railway station in the capital as train services resumed after a long break.

Public transport resumed operations across the country after the government lifted the coronavirus restrictions on Tuesday night.

Buses -- both city and long-haul ones -- were seen running with passengers.

A number of inter-district buses entering and exiting the city also contributed to the traffic jams.

Traffic police said, “A huge pressure of vehicles was seen since morning as all vehicles started to ply.”

Abu Raihan Mohammad Saleh, joint commissioner (traffic north) of Dhaka Metropolitan Police, said: “Due to the strict lockdown, many people couldn't step out of their houses.” As soon as the lockdown restrictions were lifted, people and motor vehicles in large number took to the streets, creating huge traffic congestions. But, our forces are working hard to tackle the nagging traffic situation,” he said.

On Wednesday, all offices, banks, financial institutions, factories and markets reopened. Shopping malls, markets and shops are allowed to remain open from 10am to 8pm.

All factories will be able to operate as before. Restaurants can remain open from 8am to 10pm, but only take half their capacity of dine-in customers.

Passengers, drivers, supervisors, conductors, helpers, cleaners and ticket sellers must wear masks. Masks and sanitizers will also be provided for them. Buses must also be cleaned at the start and end of every trip using disinfectant. Transport owners have also been ordered to provide disinfectant for spraying on passenger handbags and luggage. In continuation of previous restrictions, tourist spots, resorts, community centers, and recreational places will, however, remain closed.

In the wake of the worsening corona situation in the country, the government imposed the strict lockdown until August 10. The government enforced a 14-day lockdown from July 1 which was eased for eight days on the occasion of Eid-ul-Azha.

The strict lockdown, however, was imposed again on July 23 for two weeks.

Buses to run after situation returns to normalcy: Owners