On 23 July 2021, a star was faded away from the sky, air in Austin became heavy, birds stopped singing and I started re-reading ‘Third Thoughts’, a book about the universe we still do not know. Because Dr Elizabeth Weinberg, the daughter of Steven Weinberg, informed the world that her father breathed his last at the age of 88 in Austin, Texas but did not specify a cause. Steven Weinberg was an American theoretical physicist and Nobel laureate in Physics, who won the prize with Abdus Salam and Sheldon Glashow for his contributions to the unification of the weak force and electromagnetic interaction between elementary particles.

There are four known forces in the universe: gravity; electromagnetism; strong force, which binds the nuclei of atoms together; and weak force, which causes radioactive decay. The first two forces have been known for centuries, but the other two were discovered only in the first two decades of the 20th century. On 15 October 1979, the Royal Swedish Academy of Sciences, in their press release informed that “for their contributions to the theory of the unified weak and electromagnetic interaction between elementary particles, including, inter alia, the prediction of the weak neutral current” the Nobel Prize in Physics 1979 was awarded jointly to Glashow, Salam and Weinberg. It was indeed a step closer to the unification of fundamental forces in nature. Therefore this discovery was important for humankind.

Steven Weinberg was the Josey Regent Chair in Science at the University of Texas at Austin, where he was a member of the Physics and Astronomy Departments. His research on elementary particles and physical cosmology was honoured with numerous prizes and awards, including in 1979 the Nobel Prize in Physics and 1991 the National Medal of Science. In 2004, he received the Benjamin Franklin Medal of the American Philosophical Society, with a citation that said he was “considered by many to be the preeminent theoretical physicist alive in the world today.” He was elected to the US National Academy of Sciences and Britain's Royal Society, as well as to the American Philosophical Society and the American Academy of Arts and Sciences. 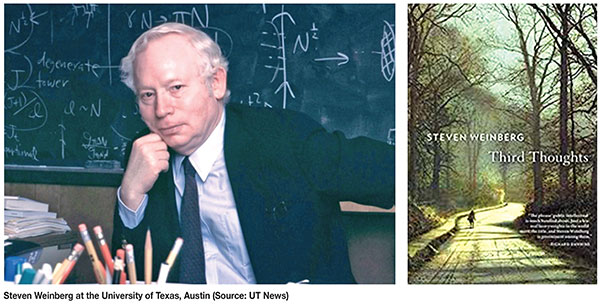 Besides several academic books and scholarly articles, Steven Weinberg had authored several popular science books such as ‘The First Three Minutes: A Modern View of the Origin of the Universe’, ‘Dreams of a Final Theory, Facing Up: Science and Its Cultural Adversaries’, ‘Glory and terror: The Coming Nuclear Danger’, ‘Lake Views: The World and the Universe, ‘To Explain the World’. In this series, his latest book was ‘Third Thoughts’, initially published in 2018 by Belknap Press and also published by Harvard University Press in 2019. This write-up explores Weinberg’s latest popular science book ‘Third Thoughts’.

The book is a collection of essays for general readers. These essays have been organised under four subjects: Science history, Physics and cosmology, Public matters and Personal matters. Weinberg informed the reader that some of these essays are polemics on subjects such as the harm done by inequality, the danger of global warming and the importance of support for public goods, including basic science. Other essays aim at explaining aspects of modern physics and cosmology and their past in nontechnical terms. ‘The universe we still don’t know’ is one of the topics addressed in the book and this has also become a subtitle of the book. This essay is a review of the book ‘The Grand Design’ written jointly by Stephen Hawking and Leonard Mlodinow.

Weinberg, in this essay, suggests that Hawking gives a good description of how scientists come to conclusion that something is real. Hawking calls this ‘model dependent reality’. However, according to Weinberg, questions about the nature of reality have puzzled scientists and philosophers for millennia. He added that “Like most people, I think that there is something real out there, entirely independent of us and our models, as the Earth is independent of our maps.” However, Weinberg insists that “I am in no position to argue that Hawking’s antirealism is wrong. But I do insist that neither quantum mechanics nor anything else in physics settles the question.” Weinberg, although maintain that “Hawking overestimates the ability of science to answer deep philosophical questions. From general ideas about determinism, and experiments that show how our behaviour is affected by physical influences, he concludes that we have no free will.”

Some of the points delineated in ‘The Grand Design’, Weinberg differs with Hawking. For example, Hawking says that philosophy has not kept up with modern developments in science, particularly physics. Weinberg argued that “Although philosophers have not done much to solve the ancient problems of philosophy neither have physicists.” Weinberg has pointed out some historical errors in Hawking’s book ‘The Grand Design’ as below:

(a)          Hawking says that the advantage of the Copernican description of the solar system over that of Ptolemy was that “the equations of motion are much simpler in the frame of reference in which the earth is at rest.” Weinberg mentioned that Copernican view did not come from the equations of motion published by Newton in 1687, but from Galileo’s 1610 observations of the phases of Venus, which clearly supported Copernicus over Ptolemy.

(b)          Hawking says that only one of the calculations of Aristarchus survives, an analysis of the size of the Earth’s shadow on the Moon during a lunar eclipse, from which he inferred that the Sun is much larger than the Earth. Weinberg mentioned that Aristarchus could never have reached that conclusion solely from observation of a lunar eclipse. Aristarchus also used observations of the Sun and Moon.

However, Weinberg maintains that these are minor points that can easily be corrected in future editions. Besides the above disagreement, Weinberg reiterates that ‘The Grand Design’ is an excellent book.

In an essay on ‘writing about science’ Weinberg argued that if we ask Aristotle today what he thought of the idea of writing about physical science for general readers, Aristotle would not have understood what we meant, because all of his writing was accessible to any educated Greek of his time. This is, in Weinberg’s opinion, not because Aristotle’s writing skill, but because he made no effective use of mathematics. Weinberg further maintains that “It is mathematics that presents an obstacle to communication between professional physical scientists and the general educated public.”

In a review on the Science journal Mario Livio wrote that the book ‘Third Thoughts’ provides “insightful and illuminating explanations of a wide range of physical phenomena” with “topics ranging from high energy physics and the makeup of the cosmos to poetry, and from the history and philosophy of science to the dangers of economic inequality.”

Above all, Steven Weinberg was well regarded by fellow scientists and philosophers. Richard Dawkins, a prolific science writer and a former Oxford Professor said, “The phrase ‘public intellectual’ is much bandied about. Just a few real heavy weights in the world merit the title, and Steven Weinberg is preeminent among them.” Nature science magazine once wrote about him, “Weinberg has a knack for capturing a complex concept in a succinct, unforgettable image…one of the smartest and most diligent scientists around.” Weinberg once said, “The more the universe seems comprehensible, the more it also seems pointless.” Regarding scientific progress, Weinberg maintains that “The idea is to see how far one can go without supposing supernatural intervention.” This is the way one of the 20th century’s greatest physicists will be remembered.