The project is aimed at making the operator ready for 5G service and also expanding its 4G network to the country’s rural areas.

The Executive Committee of the National Economic Council (ECNEC) on Tuesday approved the project at a meeting held virtually with Prime Minister Sheikh Hasina in the chair.

“A big amount of Tk 22.04 billion is being invested in Teletalk through this project to further expand its network in the rural areas and also to strengthen the necessary infrastructure to make it able to cope with the 5G service,” Mannan said.

Teletalk Bangladesh Ltd will implement the network expansion project by November 2023.The project is aimed at improving quality of the existing Teletalk network to provide modern 4G-based services to the rural people at an affordable price. 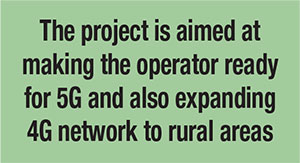 At the same time, it has been intended for modernising the existing core and transmission network of Teletalk to make it suitable for providing 5G technology based services.

The main project operations include creating some 3,000 BTS, increasing the retention capacity of the machinery of 2,000 BTS compatible to 3G and 4G.

They also includemodernisation of the BTS by replacing existing 200 mobile BTS, incorporating 4G BTS in the existing 1,000 mobile BTS sites.

A number of 5,000 Fixed Wireless Access (FWA) devices will be installed.

“As a state-run mobile operator, Teletalk expanded its network to CHT and char areas, while other operators could hardly reach those areas,” said State Minister for Planning DrShamsulAlam.

“Bangladesh is a welfare oriented country for which the government always has to look into the wellbeing of people,” he added.

According to the briefing, Planning Commission has already received a project to initiate 5G coverage in selected areas of Dhaka city, which is now under process.

Of the total cost of the 10 approved project, Tk 66.60 billion will come from the state coffer, Tk 11.88 billion as project assistance and the rest of Tk 1.37 billion will be borne by an implementing agency’s own fund, said the planning minister.

The meeting approved a project of replacing existing bailey and other risky bridges at dilapidated, narrow and important points (Rangpur zone) at a cost of Tk 8.61 billion.

While giving nod to it, Mannan said, the Prime Minister asked the authorities concerned to find out such dilapidated bridges across the country and for replacing those.

Regarding the approval of upgrading Bagerhat-Rampal-Mongla district highway to due standard and width with Tk 4.68 billion, the planning minister said,“It is the decision of the government to widen and strengthen the existing roads in phases as well as building necessary overpasses and underpasses.” Approval also came for “Enhancing capacity of Bangladesh Film Archives and collection, conservation of audio-visuals of the War of Liberation from local and foreign sources with Tk 626.8 million.”

Premier has directed for collecting and conserving all the War of Liberation related mementos from various countries, especially from Eastern Europe, said Mannan.

Prime MinisterSheikh Hasina instructed to increase facilities of Keraniganj as it has become a part of the Dhaka city.

Approval also came for Dudhkumar River management and development in Kurigram District project at Tk6.92 billion.  In reply to a question,DrShamsulAlam said Bangladesh had performed much better in GDP growth than many other countries despite the pandemic.

The country achieved 3.51 percent GDP growth in FY2019-20 which was provisionally estimated at 5.24 percent.

“Bangladesh tops the list in South Asia in terms of GDP growth while the countries like China and India experienced much lower growth in FY20,” said Dr. Alam.