Bashundhara Kings head coach Oscar Bruzon was over the moon after his side retained the Bangladesh Premier League 2020-21 title for the second time beating Sheikh Jamal Dhanmondi Club Ltd by 2-0 goals in their 20th match of the league at the Bangabandhu National Stadium in the capital on Monday.

Oscar hailed team efforts and he was especially impressed by his boys’ performance over the tournament.

“I think we have completed an excellent season with ups and downs. I’m fully happy because my team won back to back BPL titles and won the league with four remaining games this season. I think this is a big achievement for our club,” Oscar told the reporters in his immediate reaction after the day’s victory.

Kings earlier clinched their maiden BPL title in the domestic 2018-19. The club were earned 63 points from 24 matches with 20 wins, 3 draws and one defeat. The last domestic season was abandoned due to the pandemic outbreak throughout the country.

Brazilian duo Robson Azevedo da Silva Robinh and Jonathan da Silveira Fernandes Reis scored one each in the 21st and 62nd minutes on Monday. This year, they retained the title with four matches to spare. The top outfit earned 55 points from 20 matches, which helped them to take a 16-point lead over their nearest opponents and second-placed Sheikh Jamal DC, who have earned 39 points from 19 matches.

Kings started the season with an all-win record in the season’s curtain-raiser Federation Cup 2020-21 last December. They maintained a long 17-match unbeaten run in the ongoing domestic season until tasting the first defeat to Chattagram Abahani Limited in their 18th league match at the BNS last July. 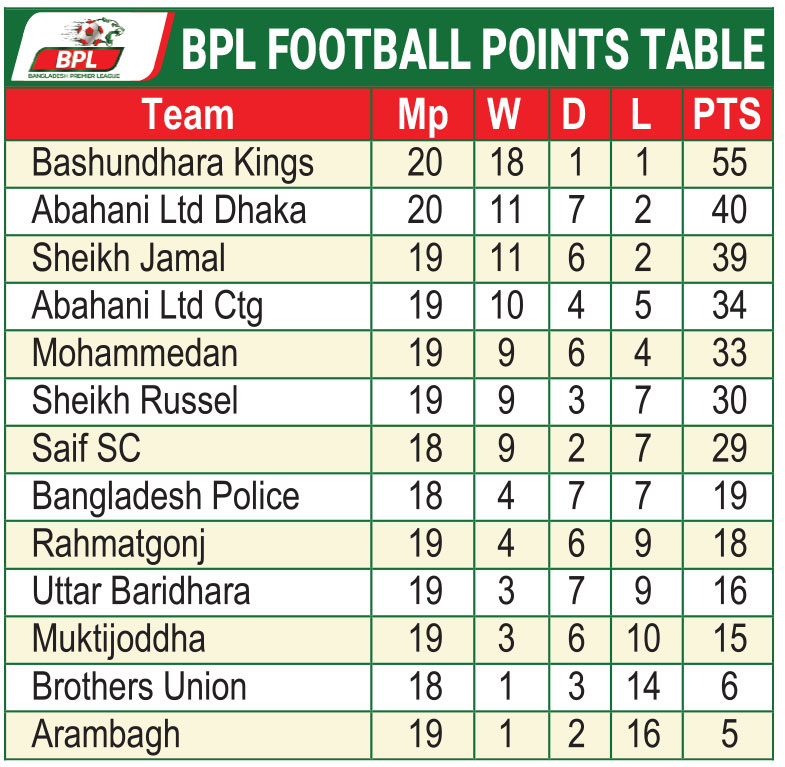 The 44-year-old Spaniard heaped praises on the club’s management due to supporting the team throughout the season.

“There have been a lot of things since the beginning of the season. I need to start praising our management for supporting us with the best facilities, best players, confidence and support throughout the years. They were always very careful,” he said.

“There were a lot of breaks and incontinuity during the league, but we were working very hard. I think we made a perfect BPL. Still we have one big tournament ahead (AFC Cup). So let’s try to finish the season in the best ways,” he further said.

Kings president Imrul Hassan was also elated with his team’s performance and achievement in the ongoing league.

“The playing eleven and reserve bench equally play important roles for any achievements. I think the Bashundhara Kings had it. The players showed expected performance over the tournament. Overall, the result of the combined efforts of the players and coaches,” Imrul said after the victory.

“Our next mission is AFC Cup. We are going to play in the Maldives without any pressure. Our players can give their best now. Initially, our goal is to become the zonal champions,” he said while asking their next goal.