Neeraj Chopra celebrated "a proud moment for me and my country" after he won the men's javelin on Saturday in Tokyo for India's first Olympic athletics gold.

Chopra, 23, managed a winning best of 87.58 metres to go one better than India's previous best -- two silver medals in the 200m and now-defunct 200m hurdles at the 1900 Paris Games by British-Indian Norman Pritchard.

Hundreds of people watched the javelin final on a screen outside Chopra's house in Panipat in the northern state of Haryana, exploding with joy when the Indian was declared the winner. The Czech Republic filled out the podium at Tokyo's Olympic Stadium, Jakub Vadlejch taking silver with 86.67m and Vitezslav Vesely claiming bronze with 85.44m.

Bollywood music boomed out on the stadium tannoy after Chopra had launched his sixth and final throw, in the knowledge he had won gold.

The farmer's son sprinted the length of the infield, an Indian flag fluttering over his shoulders. "It feels unbelievable," Chopra said. "It is the first time India has won a gold in athletics, so I feel very good. We have just one gold here in other sports. "This is our first Olympic medal for a very long time, and in athletics it is the first time we have gold, so it's a proud moment for me and my country."

Chopra added: "In the qualification round I threw very well so I knew I could do better in the final. I didn't know it would be gold, but I am very happy."

Chopra is only the second Indian in any sport to win an individual gold since Abhinav Bindra took the 10 metre air rifle title in 2008.

Elsewhere, world number one Nelly Korda gave the Americans the women's golf title to go with the men's.

With just a handful of events remaining at the Games in Japan, including the men's marathon, China lead the way on 38 golds, with the United States second on 36 and Japan on 27. 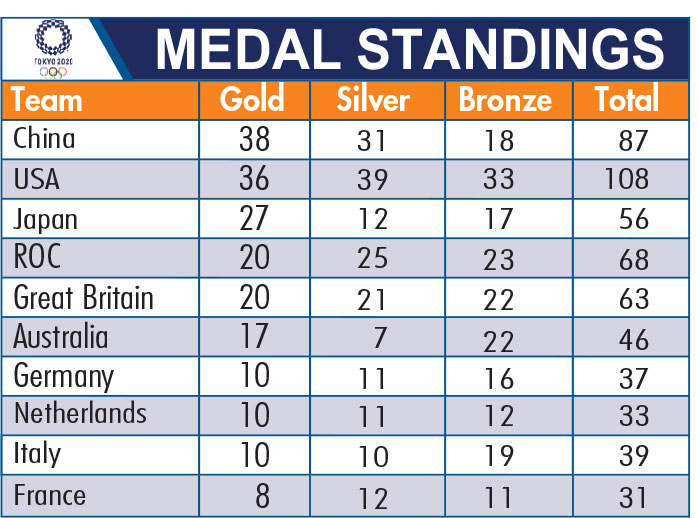