Bangladesh lost to Australia by three wickets in the fourth T20 international to suffer their first defeat in the ongoing five-match series at the Sher-e-Bangla National Stadium in Dhaka on Saturday.

In another low-scoring encounter, Bangladesh could manage only 104-9 in 20 overs before Daniel Christian and Ashton Agar made 39 off 15 balls and run-a-ball 27 respectively to guide the visitors to 105-7 in 19 overs to complete their first win in the series.

Shakib Al Hasan bore the maximum burnt in the match as he was smashed for five sixes in the fourth over of Australia innings by Christian after Mahedi Hasan gave Bangladesh the first breakthrough removing Matthew Wade in the first over. 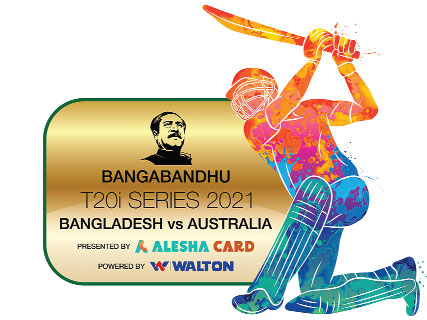 The 38-year old hit Shakib (0-50) for three consecutive sixes before he played a dot ball on the fourth ball while he smashed the next two balls for sixes to make Australia’s task easy in the chase.

However, Bangladesh fought back well and took five wickets in the next six overs while conceding only 18 runs to reduce the visitors to 65-6 from 47-1.

Nasum Ahmed removed Ben McDermott while Mustafizur (2-9) got rid of Christian and Alex Carey and Mahedi (2-17) dismissed in-form Mitchell Marsh on 11 to create a slight opportunity for the hosts to make 4-0 in the series.

However, Agar and Ashton Turner (nine not out) put up a 34-run stand for the seventh wicket which ensured the visitors a much-relieved win after losing the opening three matches in the series.

Soumya, who could make only four runs in the first three matches, struck Turner for a six in the third over but he was dismissed by pacer Josh Hazlewood (2-24) in the next over after making only eight runs.

Shakib and Naim couldn't accelerate the innings as both played a lot of dot balls which put the hosts under pressure and Shakib (15 off 26 balls) finally became Hazlewood’s second wicket in the match.

Leg--spinner Mitchell Swepson, who replaced Adam Zampa, made an immediate impact as he got rid of Mahmudullah and Nurul Hasan in successive deliveries to reduce the hosts to 51-4 from 48-1.

Swepson then dismissed Naim (28 off 36 balls) to finish with a career-best 3-12 while Afif Hossain was removed in the next over by Agar after making 21 off 17 balls.

The fifth and final match of the series will take place on Monday at the same venue.