The Lady Behind Bangabandhu

In the introduction to the first edition of Anandamath, Bankim Chandra Chattopadhyay wrote, “Under many circumstances, wife of Bangali is the main companion. But not always.” Begum Fazilatunnesa Mujib, fondly called by us, and deservedly so, Bangamata was, unreservedly the perfect companion of Bangabandhu. As Dr Nileema Ibrahim once wrote of her, “Humble but resplendent was the wife of Mujib. She is as ordinary as one of us. So is the perfect wife of a firebrand husband.” In 1946, although ill at Tungipara, she commended her husband’s going on relief work in Bihar on the instruction H.S. Suhrawardy, the then Prime Minister of Bengal. Sheikh Mujib received a letter from her wherein occurred the words, “You are born not only to be husband of mine, you are born to serve the country as well. Serving the country is the greatest of your work. You go ahead for this work without any worry. Do not worry about me. Leave me in the care of Allah.” On having learnt the contents of this letter, Suhrawardy made a prophetic comment, “Mujib, she is a very precious gift to you from God. Don’t neglect her, please.” She remained a precious gift throughout her conjugal life, until embracing martyrdom along with her husband on 15 August 1975. Abdul Gaffar Chowdhury, who had close association with Bangabandhu’s family, likens Bangabandhu to gunpowder, but hastens to admit that much of this gunpowder was sourced in Bangamata. Sheikh Hasina, our honourable Prime Minister, in one of her writings, calls her mother a guerrilla. Indeed, Bangamata was the behind-the-scene guerrilla fighter in the political battles fought by Bangabandhu.

Heeding the advice of the political mentor Suhrawardy, as well as because of his husbandly values, Bangabandhu always gave his Renu (Bangamata) her due. He had to do this as all his political junctures could be tided oner because of Renu’s advice. Apparently, she was a simple housewife away from the din and bustle of political happenings, which were her husband’s realm. But as it was, she always demonstrated a thorough grasp of the political comings and goings, or she would not be in a position to tender right advice for Bangabandhu, which were found always to stand in good stead for him. Bangabandhu had a photographic memory; but he himself was to be found gloating over his wife’s retentive memory; for which reason, Bangamata was “a living diary” to her husband. On occasions, Bangabandhu was reported to have cross-checked facts with his “living diary.”

I have seen in my life that even if I went ahead to take bullet, my wife never stopped me. I have also seen that despite incarceration for about 10/11 years she never opened her mouth in protest. If she did so, I would certainly have faced many obstacles in life. There were occasions when I went to jail without leaving a penny for my children. She has substantive contributions in my life of relentless struggle.

So this was Bangamata in the words of her illustrious husband.

We have on record Bangabandhu’s confessional statement, “I have two big supports in my life. First is my self-confidence, the other is my wife from childhood.” Bangabandhu was the banyan tree for Bangalis; Bangamata was the tree that afforded abundant shade to Bangabandhu. 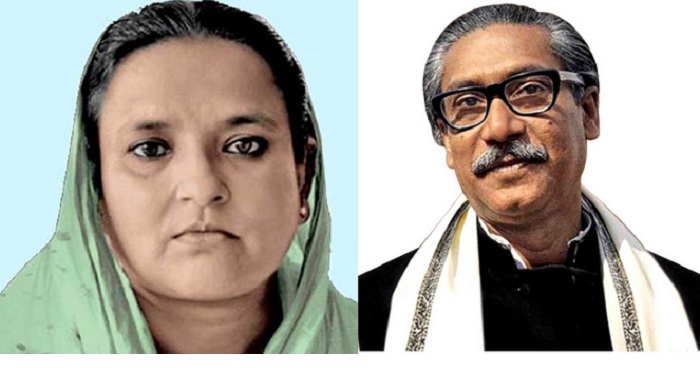 Bangamata: The Lady Behind Bangabandhu