Afif set to be perfect choice for ‘smart’ batting

Middle-order batsman Afif Hossain needs to keep his calm as Bangladesh take on Australia in the third of the five-match T20I series at the Sher-e-Bangla National Stadium today.

Bangladesh is currently leading the series by a 2-0 margin after winning both the opening games and on both occasions, Afif played a crucial role in the middle to make a statement.

The 21-year old is not strongly built unlike some of the T20 specialists playing across the globe but that hardly makes him any lesser a cricketer in the shortest format as he demonstrated smart batting. 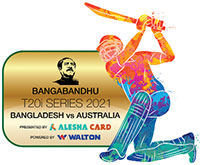 Afif played a very crucial innings of 23 off 17 balls at the later part of their innings to guide Bangladesh to a challenging total which they eventually defended successfully in the series opener.

In the second game, Afif had an even bigger contribution in their win, perhaps the most important one as he struck an unbeaten 37 off 31 balls to guide his side home despite coming to the crease in a tough situation.

The left-handed batsman hardly looked nervous despite facing a bowling unit comprising Mitchell Starc and Josh Hazelwood and the way he struck Starc a cover drive effortlessly in the second game, should give him a lot of confidence ahead in his career.

The visitors failed to get over him despite trying all their tricks under their sleeves and in presence of Nurul Hasan (21-ball 22 not out), he added 56 runs for their unbroken sixth-wicket stand and sealed the game for the hosts.

The Bangladesh team management is eagerly looking upon Afif to take the responsibility of the lower middle-order in the shortest format and after the matches, he looks to be the perfect choice as he is growing from strength to strength with each passing day.

The way Afif handled the visitors’ bowling unit and guided his team to victory only validated the statement made by their batting coach Ashwell Prince that suggested he’s confident about the potential of the youngster.

“It was very pleasing to see Afif and Nurul stand up and carry on till the end. That showed a lot of maturities. Losing a few wickets had caused a bit of tension in the dressing room but the way Nurul and Afif batted, I think it took the pressure off and in the end, we were relieved,” he said.

The left-handed batsman got into his zone by hitting Andre Tye’s knuckleball for a six over mid-wicket and since then dominated the proceeding in the middle.

“I think he (Afif) is growing with each passing day and learning to take on the responsibility,” BCB Chief Selector Minhajul Abedin told The Daily Sun on Thursday.

“We were looking for someone who can take the responsibility down the order and he looks to be the perfect choice at the moment.

“The best part is that he never gets awed by the presence of big stars and always keeps his composure and when someone bats with authority it also helps the man at the other end which was the case with Sohan (Nurul) the other day,” he added.

The smartness of Afif came through the fact that whenever he looked to be pushed by the pace he used it for his purpose by gliding it and that too with perfection and the best part was that he knew it was his responsibility.