McLaughlin powered home under the beating Tokyo sun in 51.46 seconds, with world champion and 2016 Olympic gold medallist Dalilah Muhammad claiming silver in 51.58 after another classic duel between the two dominant American hurdlers. Muhammad made a flying start in the lane outside her compatriot and rival but McLaughlin produced a late burst of speed to claim victory.

The 21-year-old McLaughlin's blistering time bettered her world record set at the US trials in Oregon in June, when she ran 51.90sec.

Muhammad, 31, also ducked inside the previous world record, with bronze medallist Femke Bol of the Netherlands just outside the 52-second mark. It came a day after an epic duel between Karsten Warholm and Rai Benjamin in the men's 400m hurdles which ended with Norway's Warholm winning in another world record time.

Canadian De Grasse was the fastest man in the semi-finals with a national record 19.73, 0.1sec quicker than another American, Kenneth Bednarek.

Jamaica's Elaine Thompson-Herah made history on Tuesday, winning the 200m to complete the first women's Olympic sprint "double-double" after her earlier triumph in the 100m. 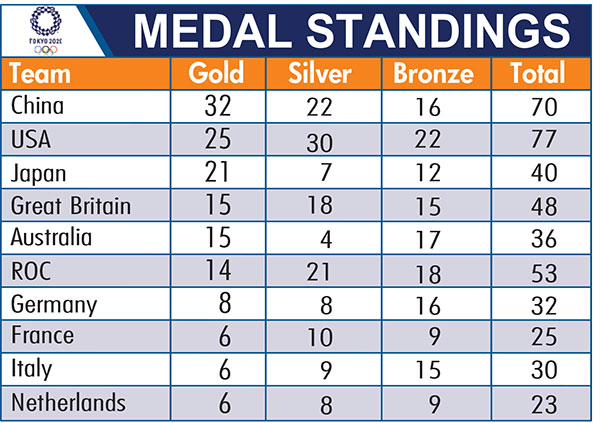