Sheikh Kamal: A Brave Son of Our Time

The eldest son of the Father of the Nation Bangabandhu Sheikh Mujibur Rahman, Shaheed Sheikh Kamaluddin was born on August 5, 1948. He is mainly known as Sheikh Kamal. On the dark night of August 15, 1975 he was brutally killed along with his family members by the treacherous civil-military conspirators. The gruesome murder of 1975 took away the potential young life only at the age of 26.

He was a successful activist of different student-movements of late 60s and early 70s. He was the architect of modern football in Bangladesh. He was a promising cricketer, sports organizer, actor and ‘sitar’ player. He was the founder of Abahani Krira Chakra, Spondon Shilpi Goshthi, Dhaka University Drama Circle. He secured the second position in the then East Pakistan Education and Culture Week in playing ‘sitar’. He played for Abahani Cricket Club in the first division. He also played roles in many dramas staged by DU Drama Circle. As a student of Sociology of Dhaka University he was a favourite personality to students and teachers.

As a friend and as an activist Sheikh Kamal was Boro bhai to the juniors. As humble natured and always cheerful he was dear and near to everyone. He had no pride of being the son of the Prime Minister. The famous litterateur and ex Vice Chancellor of Chittagong University Professor Abul Fazal wrote, “The humble face of that handsome appearance with a thin and lean physique is still very much fresh to me. Today he is missing; his newly wed bride, a great sportswoman of the country is also gone”. 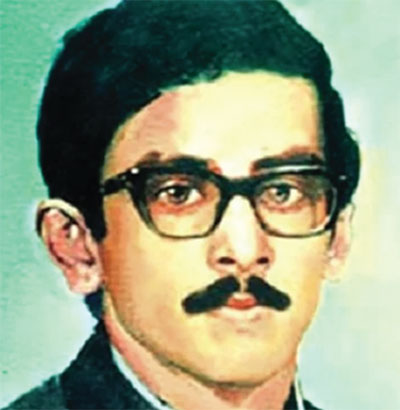 Sheikh Kamal was the most widely discussed young figure of his time. Still there are debates for and against him and this is quite natural. There will always be for and against an active man. An inactive man is hardly discussed. There were many discussions about this hardworking young man after his death. The main characteristic of youth is emotion and this was mostly visible in Sheikh Kamal. Those who speak ill of him are influenced by their negative attitude to his many good works, creativity and sociability. This attitude in many ways is evil designed with an envious purpose.

When grown up Sheikh Kamal was able to understand politics very closely. His boyhood was greatly influenced by his father’s dream of liberating the Bangalees from colonial exploitations. On the other hand, his social life was greatly influenced by sports and culture. Because of a political family there was a natural manifestation of leadership quality. This has resulted in becoming a successful student activist and a sports organizer as well as a successful sensational music lover. He used to organize musical gatherings. Many musicians of today are the witnesses to it. His own personal initiative was behind the foundation of ‘Spondon’. Famous singer Ferdous Wahid and late Azam Khan were involved in it. Famous Nazrul singer Niaz Mohammad Chowdhury and Tagore song singer Fahim Chowdhury were among his close friends. As a student of ‘Chhayanot’ Sheikh Kamal himself was a sitarist and as a sitarist he could place his name in the music world of the then East Pakistan. After independence the cultural forum sponsored by the Bangladesh Chhatra League named “Bangladesh Jatiya Sangskritik Andolon” was the brain child of Sheikh Kamal. In 1969 in the Provincial Competition of Education and Culture he was placed second as a sitar player. The first place went to his friend Joseph Komol Raudrix. Both of them were friends in Dhaka College.

Sheikh Kamal was a promising dramatist too. He could spell in both staging plays and acting. He played a great role in scrapping the black laws imposed on staging plays in the country. Famous actors M Hamid and Kha Ma Harun and he founded Dhaka University centred Drama Circle. In the famous play ‘Muntasir’s Fantasy’ his acting was very much appreciated.

Sheikh Kamal was a legendary activist in the student-politics of Bangladesh. Many leaders were made by him and he used to remain behind the screen in creating leadership. This hidden role made many jealous of him. From mid 60s till mid 70s his very presence in most of the processions arranged by the Chhatra League was strongly felt. The only exception was during his service in Bangladesh Army. His active politics began from Dhaka College. He was very skilled as an organizer. But unfortunately he was not given any position in Chhatra League before independence. After his return from Army to student-politics he found a divided Chhatra League in the name of ‘scientific socialism’. At that time he was given membership in the Central Executive Committee of BCL. Later on he was nominated for the membership in the Central Committee of Jatiya Chhatra League, a sister organization of BAKSAL. As a believer in liberal democracy and socialist philosophy Sheikh Kamal’s relentless efforts saved the student-politics from disaster many a times. Sheikh Kamal bravely fought against the dubious role of Shafiul Alam Pradhan.

Sheikh Kamal’s main philosophy was people’s welfare. His political thinking was always liberal. He had friends bearing different political ideology. Fazlur Rahman Patal, Iqbal Hasan Mahmud Tuku and Major Qamrul Islam were among his friends. Iqbal was a follower of Maolana Bhashani. Besides them many from Biplobi Chhatra Union, Chhatra Union and JSD Chhatra League were his close friends. To Sheikh Kamal political ideology was never a measure for selecting friends. Adventurism in youth was strongly active in him.

He was never addicted to narcotics. He never smoked. He was married to the famous sportswoman of Bangladesh Sultana Begum Khuki. They were made for each other. Their deaths have proved that their love was immortal. Their attraction for each other never crossed the decency, whereas many enviers created many fictitious stories about their happy conjugal bond.

Sheikh Kamal was a true patriot and timely son of the soil. At the time of Bangabandhu’s arrest he was able to escape to join the Liberation War. As an officer in Bangladesh Army he was appointed ADC of Commander in Chief General M A G Osmany. Those who worked with Osmany knew very well how difficult it was to work with him. Nevertheless, it was a very vital post and Sheikh Kamal performed his duties very sincerely and skilfully. In need of the country he never hesitated to leave behind the love of his parents and brothers and sisters. His mother smilingly encouraged him to sacrifice for the different journey of her son.

There is a scarcity of such youth in today’s Bangladesh. Such a youth with versatile nature is hardly found in today’s young generation. His death was very untimely. Today’s young generation has many things to learn from such an idol. Today’s youth is after money being endangered by greed and power. Patriotism, dutifulness, social reform – these ideological agenda no longer attract them. So the more Sheikh Kamal is discussed the more benefits would be derived. Our young people lack an ideology very much. Studying Sheikh Kamal and his life would fulfil this lack of ideology. Creativity was the weapon for Sheikh Kamal to conquer the evils in society. After August 1975 a big generation gap was created by the killers of Bangabandhu and his family members to distort the true history of 1971 Liberation War. After Bangabandhu’s daughter Sheikh Hasina’s return to power through people’s verdict, this evil design of the killers has gone to ashtray. The killers are being punished and this delayed justice has once again proved that lies cannot be inserted to what Sheikh Kamal did for the country selflessly.

The writer is the Treasurer, Jagannath University

Bring dropouts back to classes