Helena Jahangir, suspended member of Awami League subcommittee on women’s affairs, has been placed on 14 days’ remand in four cases.

The court passed the order after Sub-inspector Sheikh Shahanur Rahman, also investigation officer of the cases, produced her before the court seeking remand for 15 days in the two cases.

Defence lawyers submitted petitions seeking her bail in the cases but the court rejected the pleas after hearing.

Meanwhile, Dhaka Metropolitan Magistrate Shahinur Rahman granted a total of eight days’ remand for the suspended Awami League leader in two other cases filed with Pallabi Police Station on charges of fraudulence and under the Telecommunication Regu-latory Act.

The court passed the order after Md Yamin Kabir, an inspector (Operations) of the police station and the investigation officer of the cases, produced her before the court seeking remand for 14 days for interrogation. 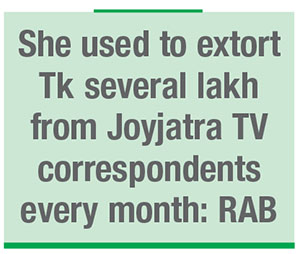 Earlier in the day, Helena Jahangir was produced before the court on completion of her three-day remand in another case filed with Gulshan Police Station under the Digital Security Act.

Opposing the remand petitions, defence lawyers submitted bail petitions for her in the two cases but the court rejected the pleas after hearing.

One Abdur Rahman filed the fraudulence case against Helena Jahangir on Monday alleging that she had taken Tk 54,000 in the name of appointing him as Bhola correspondent of Joyjatra Television.

Another case filed against Helena under the Telecommunication Act. It was alleged that Helena operated ‘Joyjatra Television’ without government approval and licence and was running its office illegally in Dhaka’s Mirpur area.

The arrestees are Hazera Khatun, 40, wife of Monirul Islam of Atobarpur at Burichang upazila in Cumilla, and Sanaullah Nuri, 47, son of late Sheikh Moinuddin  of Samantapur in Gazipur.

RAB assembled this information after arresting the two associates of Helena Jahangir on Tuesday morning.

He said Hazera was a protégé to Helena and was made DGM of Joyjatra Foundation in 2016 and later GM of Joyjatra TV. During primarily interrogation, the arrested woman said Joyjatra TV had illegally been running operation as a down-link of Hong Kong since 2018.

“Under pressure from Helena, many correspondents were involved in negative activities. She took a percentage of the money collected airing interview of many people and campaigning in favour of candidates of various polls,” Al Moin said.

Helena planned to make a network with 5,000 mass media workers against the mainstream media.

On Joyjatra Foundation, the official said the organisation has 200 members. Helena collected from Tk 20,000 to Tl 200,000 from each for his or her membership.

Besides, she collected a sum of money from members, donors and other persons at different categories. And she ate up a lion’s share of the money, Al Moin narrated.

About Sanaullah Nuri, the elite force officer said he was a coordinator of Joyjatra TV’s correspondents. “If any correspondent didn’t pay money monthly, he would intimidate him or her and press to pay the money. Allegation of extortion has been raised against him,” he said.

On July 29, a team of RAB arrested Helena Jahangir during a raid on her Gulshan-2 residence in the capital.

During the drive, the elite force seized a huge quantity of imported liquor, casino equipment, walkie-talkie and knives from Helena Jahangir’s residence. After her arrest, RAB also conducted a raid on her IP TV station and sealed it off.

A day after her arrest, she was put on a three-day remand in a case field under the Digital Security Act with Gulshan Police Station.

So far, four cases were lodged against Helena after her arrest.