Everyone to have an address: PM

She distributes flats among 300 low-income families

Prime Minister Sheikh Hasina on Tuesday said no one in Bangladesh will remain without shelter as her government is working to ensure access to affordable housing options for all.

“Everyone will get an address,” she said while distributing newly-constructed flats among 300 families, who had been living in slums of the capital.

She handed over allocation papers of the new flats in 14-storey three buildings on rental basis. The Ministry of Housing and Public Works implemented the project at Mirpur 11.

“This is the Bangladesh of Father of the Nation Bangabandhu Sheikh Mujibur Rahman. Everyone in Bangladesh will get a better life …that’s our aim,” she said. 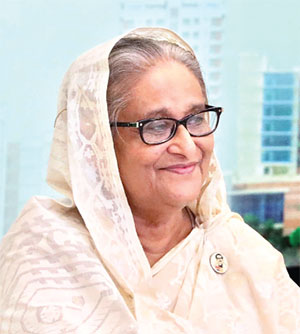 Hasina said she thinks that materialising the dream of the Father of the Nation is synonymous with the development of Bangladesh.

“Our only responsibility is to implement the dream of the Father of the Nation, I think that’s the development of Bangladesh,” she said.

Hasina said the way Father of the Nation Bangabandhu Sheikh Mujibur Rahman thought about the welfare of the country and its people, no one else could do this that way.

About the people living in slum-like areas, the prime minister said the government will arrange proper accommodation for them.

“This is unfortunate [for Bangladesh] that he didn’t get the time as August 15 (killing) took him away. He didn’t get the scope to materialise his dream to reshape every village (of the country) in a planned way,” she said.

Regarding the multi-storey integrated office building in Madaripur, where all government services will be available under the one roof, Hasina said saving the land of the country should be there in mind always while carrying out development activities.

“We did it in Madaripur at first. Gradually, we’ll do that in every district and upazila for the convenience of people to avail themselves of all sorts of government services from one place,” she said.

Hasina said the government has a plan to construct flats at the upazila level to mitigate the accommodation problem of public servants.