Lamont Marcell Jacobs stormed to a shock victory in the Olympics 100m final on Sunday to cap a golden double for Italy on a dramatic day of athletics action at the Tokyo Games.

Jacobs became the first Italian in history to be crowned champion in the blue riband event of the Olympic track and field programme after powering home in a blistering 9.80sec.

The 26-year-old Jacobs erupted as he crossed the finish line and leapt into the arms of compatriot Gianmarco Tamberi, who only moments earlier had clinched a rare shared gold medal for Italy in the high jump after a duel with Qatari world champion Mutaz Essa Barshim.

It was the final act of a pulsating day three of track and field at the Olympic Stadium which also saw a brilliant world record-breaking gold medal victory in the triple jump for Venezuela's two-time world champion Yulimar Rojas. But the undisputed headline-grabbing performance of the night belonged to Italy's Jacobs, who had never previously gone under 10 seconds before the 2021 season.

"It's incredible," Jacobs said afterwards. "My dream was to arrive here and run a final. We run a final and we win a final."

In the triple jump meanwhile, Rojas did her best to electrify a largely empty stadium with a scintillating world record with her last leap of 15.67m, smashing the previous best of 15.50m set by Ukraine's Inessa Kravets 26 years ago. 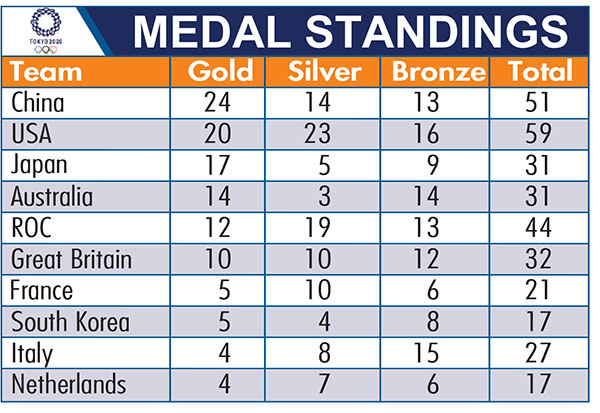