Australian cricketer Ashton Turner on Sunday said that he will be looking to make a place in their World T20 squad by showcasing his all-round ability during the upcoming T20I series against Bangladesh.

The 28-year old, who is in Bangladesh for the first time, is known for his batting but he recently has started bowling after a two-year gap after recovering from a shoulder injury.

Turner, who played two T20Is as well as all three ODIs against West Indies last month, bowled 14 overs during the last two ODIs against the hosts where he picked two wickets while making a decent 49-run innings during the first ODI. 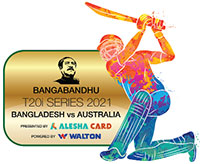 Australia will be without many of their first-choice players in the likes of David Warner, Steve Smith, Glenn Maxwell and Marcus Stoinis against Bangladesh and Turner is hoping to grab the opportunity to make their selectors’ job difficult to pick their best squad for World T20.

“I guess every time I am around an Australian squad, it creates the hunger to stay in the squad. It’s an amazing place to be in,” the middle-order right-hand batter said during a virtual press conference.

“I feel so fortunate to represent my country. Any opportunity I get, I try to grab it with both hands. The World Cup is a showcase event and I would love to be involved.

“But also I know that there are a lot of quality players who are trying to be in the squad. It’s up to me how I play in the next couple of months and I hope I can put my name in front of the selectors.

“I think every selector, every captain, every coach in the world wants a player who can contribute more than one facet.  Sometimes the captain and coach look around for another option and it can make my life easier.

“We have a good bowling unit and I enjoy contributing around, on the field as well. If it helps the team for a few instances, I am happy about it,” he added.

Turner feels that playing in Bangladeshi conditions would be different from their playing in the Caribbean as the sub-continental condition favours the spinners most and he expects a lot of overs from spinners during the upcoming five-match series, starting in Dhaka on Tuesday.

“I’m really excited, first time in Bangladesh…Talking to the guys who played here before, we are probably expecting wickets not similar to what we experienced in West Indies.

“And coming from Australia, particularly in winter, we haven’t played in so many spin wickets like this. You know, as a spin bowler, I’m really excited to have such wickets that offer some spin bowling which isn’t always the case in Australia.

“As a batter, I know that we will come up against some crafty spin bowlers. There will be a lot of overs bowled by the spinners, no doubt,” he added.

Turner thinks that they could have a better idea about the condition in Bangladesh as there are a few players in the squad who have the experience of playing in such conditions before.

Ashton Agar, Josh Hazlewood, Mitchell Swepson and Matthew Wade are the only four cricketers in Australia’s current team who were part of their last touring party that visited Bangladesh for a two-match Test series in 2017.

“Some guys have played in the ground in the previous tours. I am really looking forward to having a look at the conditions and try preparing ourselves as well as we can before the game on Tuesday,” said Turner, who played nine ODIs and 13 T20I for the Aussies so far.