Gymnastics superstar Simone Biles further slashed her Tokyo Olympics schedule over a crippling mental block on Saturday as a raging Novak Djokovic missed out on a tennis medal.

And in the pool, US stars Caeleb Dressel and Katie Ledecky added to their gold medal collections, while Great Britain won the Olympics' first mixed 4x100m medley relay.

Biles, the four-time Olympic champion widely considered the best that gymnastics has seen, dropped another two events after earlier pulling out of the team competition and the women's all-around.

The 24-year-old is struggling with the "twisties", a temporary condition where gymnasts lose the ability to orientate themselves in mid-air.

After withdrawing from the vault and uneven bars on Saturday, she has just two events left on her schedule: the floor on Monday and the beam on Tuesday.

"We remain in awe of Simone, who continues to handle this situation with courage and grace," a USA Gymnastics statement said.

Other US stars powered on, with swimmer Dressel winning the 100m butterfly in a world-record 49.45sec and distance specialist Ledecky bagging her third straight 800m title.

"It hurt really bad but it was fine," said Dressel, 24, after winning his third gold in Tokyo. "I knew what my race plan was and stuck to it, got the job done."

But Dressel lost his chance of a Michael Phelps-style six golds when USA finished fifth in the mixed 4x100m medley relay behind Britain's world record 3:37.58.

Meanwhile, Jamaica's Elaine Thompson-Herah broke the Olympic record as she won the women’s 100 metre race in 10.61 seconds in the final to become the fastest woman in the world.

Jamaica's Shelly-Ann Fraser-Pryce, who was on course to become the first woman to win an Olympic athletics event three times, after her 100 metres victories in 2008 and 2012 respectively, finished second with 10.74 seconds while her compatriot Shericka Jackson won the bronze medal with a 10.76 timing.

And pole vault world record-holder Armand Duplantis of Sweden eased through qualification for a final that will take place without his American arch-rival Sam Kendricks, who tested positive for coronavirus.

In tennis, Djokovic smashed a racquet against the net post and hurled another into the empty stands in a spectacular meltdown as he lost the bronze medal match to Spain's Pablo Carreno Busta.

The Serbian world number one, who missed out on his chance at the first men's Golden Slam -- winning all four majors and the Olympics -- when he went down to Alexander Zverev in the semis, threw away a one-set lead to lose 6-4, 6-7 (6/8), 6-3.

Djokovic then pulled out of the mixed doubles bronze-medal match citing a left shoulder injury, raising concerns over his US Open campaign in month's time. 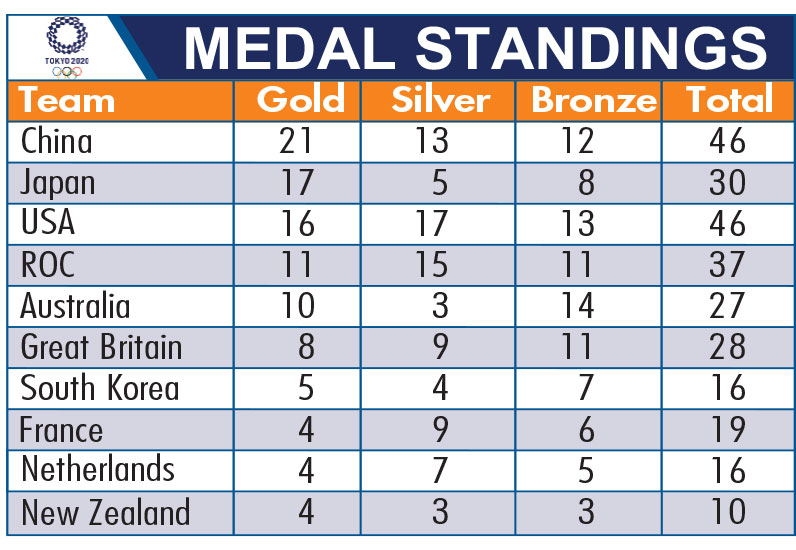