Australia’s wicket-keeper batsman Josh Philippe was taking pictures while all-rounder Ashton Turner, who was sitting behind Philippe in the team bus looking astonishingly through the window as they began their journey for the team hotel after arriving in Dhaka on Thursday. 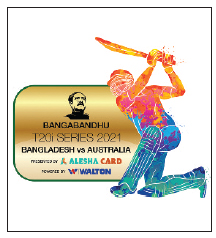 It was drizzling all around the city but despite the fact, there was no shortage of enthusiasm by the media personnel as they decided not to lose any possible angle of the Aussie team after waiting there for more than an hour fighting against all odds that included hassles with security personnel at regular intervals as they were concerned on creating a smooth passage for the visitors.

The security officials entrusted with the duty of running the show at the Shahjalal International Airport had to manage the people involved in clearing and forwarding as the tourists decided to use gate number eight which is also known as the customs gate instead of the VIP gate.

Cricket Australia decided not to travel through the immigration hassle and BCB made sure that the Australians can go to the team hotel from the airport tarmac after arriving from West Indies through a chartered flight directly through the customs gate.

The visitors’ immigration was done separately with their passports being returned to them afterwards.

BCB entertained every wish placed to them to make sure Australia’s first trip to Bangladesh since 2017 like playing all the matches at the Sher-e Bangla National Stadium and laying out stringent bio-bubble measures for five-match T20 series.

It’s also the first bilateral T20 series between the two sides that will eventually complete Australia’s preparation for the upcoming ICC World T20 in UAE and Oman in October-November.

Though several seasoned Australians are missing in the squad, it will be a perfect platform for their head coach Justin Langer to see their bench 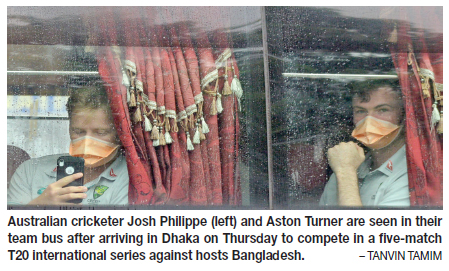 strength ahead of the global tournament.

The relatively inexperienced cricketers are expected to give the hosts a good run for their money as they will be keen to book a berth in the UAE based chartered flight to play the upcoming World T20.

The Aussies came here with confidence after beating West Indies in their own den in ODIs but the urgency would be even higher this time around for the ICC WT20 probables as they will be keen to show their potential in the sub-continent condition.

Meanwhile, the Bangladesh team arrived from Zimbabwe on the same day morning after earning a rare feat of winning the series across formats.

The cricketers didn’t have the opportunity to go back to their home as they headed straight to the team hotel where both the teams will complete a three-day room quarantine.

Bangladesh will be eyeing to get mentally fit as early as possible after being part of the bio-bubble for the most of the year.

The Tigers will also have the chance to see their bench strength to quite an extent as they will be missing some of their key players in the series like Tamim Iqbal, Mushfiqur Rahim and Liton Das.

The host selectors, however, don't have to announce a squad in advance - according to the playing conditions agreed by the two boards, the teams can only field players who have either been in quarantine in Dhaka since July 20 or been a part of the tours in Zimbabwe and West Indies respectively.

Bangladesh’s 17-man squad involved in their 2-1 series win in Zimbabwe in the T20Is moved directly to the team hotel in Dhaka while the Australians are yet to name their captain for the series as Aaron Finch was ruled out in the middle of the West Indies series.

After completing the three-day quarantine and receiving negative Covid results, both teams will start their preparation at the SBNS.